Book Spotlight on The Infamous Duchess by Sophie Barnes (GIVEAWAY)

A woman with a questionable past devotes herself to charity while keeping from forming attachments until a charming man pursues her and helps her when she needs support most in this historical romance where things aren’t what they seem.  Keep reading to get a tempting taste of The Infamous Duchess by Sophie Barnes, then add it to your bookshelf.  In honor of this fourth installment in the Diamonds in the Rough series visit the link below for the chance to win print copies of the first three books in this series too! 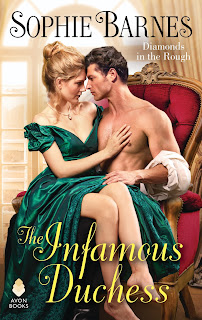 A woman with a shocking past...
Branded a money-hungry con artist for marrying the elderly Duke of Tremaine days before his death, Viola Cartwright has found refuge in her work at St. Agatha’s Hospital. No one must know the painful reason behind her marriage. She steers clear of attachments—until Henry Lowell, heir to Viscount Armswell, lands on her operating table after a duel. Charming and wickedly handsome, Lowell is one of London’s most inveterate scoundrels. Yet he may not be all that he appears.
And the man who can promise a future filled with love...
Posing as an unrepentant rake has helped Lowell avoid women pursuing him only for his title. But now that duty has finally called on him to marry, he finds himself entranced by the mysterious, independent-minded Viola. Then her late husband’s son returns from overseas, contesting Viola’s inheritance. Lowell longs to help her and sets out to convince Viola that a strategic union may be the best way to save all she holds dear. But can he also persuade her to take a chance on love…?

When Henry Atticus Lowell awoke, the first thing he became aware of was the gentle tread of someone moving carefully about. He flexed his fingers and felt the soft cotton of a sheet draped over his body. Well, it would seem he was still alive, thanks to his brother’s miraculous efforts. And the pain . . . it was more of an ache now, which was a definite improvement.
Hesitantly, he opened his eyes just enough to let a bit of light in. It was blinding, the sunshine spilling in from a nearby window with unforgiving brightness. He winced and immediately closed his eyes again.
“Mr. Lowell?” The voice that spoke was feminine, soft and soothing, a mere whisper almost. Henry grunted his response and sensed the woman come nearer. “I hope I did not disturb you.” A soft hand settled upon his brow for no more than a fleeting second. “You do not seem to have a fever, which is excellent news.”
He drew a deep breath, focused on the tightening effect it had on his chest, and gradually expelled it. “No.” Again he tried to open his eyes, to see the nurse who’d come to attend him. She sounded lovely and . . . The light was no longer as bright as it had been. It shone at the woman’s back, surrounding her in a halo of gold. She was fair, with dark blond tresses catching the sun and tossing it back. Her face, however, was perfection itself, a pair of pale blue eyes and full lips portraying the deepest shade of rose he’d ever seen.
Perhaps he had died after all.
Henry closed his eyes on that thought and allowed himself to drift off again, certain he’d just caught a glimpse of heaven and one of its prettiest angels. But the matter of leaving his earthly state was quickly dismissed when he woke again later to find his brother sitting nearby. The room was now cast in shadows, alerting Henry to the late time of day.
He tried to speak but wheezed instead and was grateful for the glass of water Florian swiftly pressed to his lips. “Thank you,” he managed after savoring the cool liquid flowing down his parched throat.
Florian eyed him with stalwart gravity. “I was worried about you for a moment.”
Henry grinned and immediately regretted doing so when his wound stretched uncomfortably in response. He winced and grew serious, making every effort to relax. “Is that really all I deserve? A mere moment of concern?”
“Humph! I’ve enough faith in my own skills to know when more is unnecessary. That’s the moment I’m talking about. The second it took to assure myself that I wouldn’t have to convey the news of your death to our parents.” He paused for a second, and then, “What the devil were you thinking, antagonizing a cocky lad who’s barely quit his leading strings? You know someone like that is going to fight before he thinks.”
“You’re lucky he isn’t here to witness your insult or I daresay he’d call you out next. All I did was tell him his orange jacket looked ghastly and that his tailor ought to give better advice.”
“Christ, Henry.”
“What? Would you not prefer for someone to tell you that you look ridiculous instead of continuing to parade about as if you’re presenting high fashion?”
“Of course I would, but that’s hardly . . .” Florian let the words fade and placed his hand on Henry’s arm instead. “I’m glad you’re all right and that you’re still here. The alternative would be unthinkable.”
Henry allowed a faint smile. “I made you miss your ship.” He felt terrible about upsetting his brother’s plans, but he’d also been more afraid than he’d let on and had wanted his brother’s medical expertise to be available.
“Yes. You did.”
“Can you forgive me?”
“After everything you’ve done for me? How could I not?”
Grateful, Henry sank further back against his pillow. And yet . . . “I haven’t done so much.”
Florian held his gaze. “No. Of course you haven’t. You only helped me fight Bartholomew after discovering I’d lied to you about him for fourteen years.”
“Telling me he was your father was not a simple thing.”
“No. It was not. But that doesn’t change the fact that perhaps it is I who should ask for your forgiveness?”
Henry sighed. “You’re my brother, no matter what. Forgiving you was easy.”
“Thank you.”
Florian shifted as if discomforted by the intimacy of their conversation, so Henry decided to change the subject. “There was a nurse here earlier, or at least I believe she must have been a nurse. She placed a compress on my forehead.”
The edge of Florian’s mouth lifted. “And?”
“Well, I was merely thinking that if she’s been assigned to my care, it would be nice to know her name.”
“Hmm . . .” Florian didn’t look convinced by this explanation, as evidenced when he said, “I don’t want you flirting with the staff, Henry. You need to recuperate and they need to do their jobs without you ta—“
“For God’s sake. I only want her name. You needn’t make it sound as though I have questionable intentions.”
Florian sighed. “Fine. If you can describe her to me, I might be able to help.”
Pleased, Henry couldn’t stop from smiling. Especially not when he thought of the woman he’d seen. “She’s fair with golden hair and eyes the loveliest shade of blue I have ever seen.”
“Ah. I believe you must be referring to Emily.” 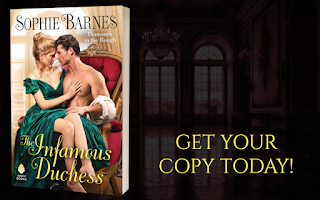 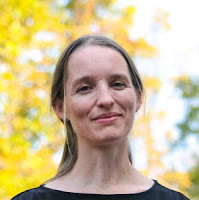 Born in Denmark, SOPHIE BARNES spent her youth traveling with her parents to wonderful places all around the world. She's lived in five different countries, on three different continents, and speaks Danish, English, French, Spanish and Romanian. But, most impressive of all, she's been married to the same man three times-in three different countries and in three different dresses. When she's not busy dreaming up her next romance novel, Sophie enjoys spending time with her family, swimming, cooking, gardening, watching romantic comedies and, of course, reading. 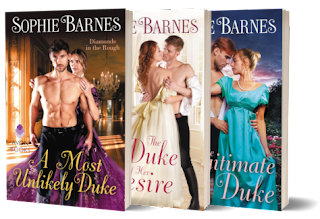