Set in the rock star world, readers will find themselves drawn to this sexy tale of a drummer who can no longer ignore his attraction to his best friend’s sister in a connection made more complicated by the fact that they’re all bandmates.  Keep reading to get a tempting taste of Rock Hard by M.J. Roberts, along with my impressions of it, then add it to your bookshelf.  In honor of this first installment in the Chord Brothers series make sure to fill out the form below for the chance to win a $75 iTunes GC too! 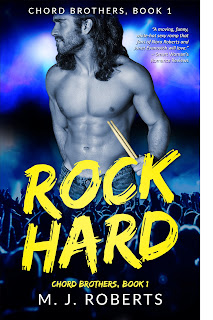 Drummer Ryder Chord has been living half a life since he was sixteen and his twin sister was murdered. He throws himself into his music. When Lexi Evanovich joins the band, life becomes almost tolerable. Until one day when the rest of the band isn’t there and Ryder and Lexi have to share a hotel room: with only one bed.
Rule number one of band-dom: You never sleep with anyone in the band.
Rule number one of bro code: You never sleep with anyone’s sister. You definitely never sleep with your best friend’s little sister.
Rule number it’s so obvious it’s a count even a drummer can keep: You Never. Ever. Sleep with your best friend’s little sister when she’s in the band…and he is too.

When it comes to rock star romances I can never get enough and I inhale every title I come across.  The synopsis for this series starter definitely pulled me in and courtesy of its likable characters, and their emotionally intense backgrounds, I was captivated by all the twists and turns and am looking forward to revisiting these band mates again soon.

Ryder Chord’s the drummer for up-and-coming rock band Hard Chord, a guarded and contemplative musician with music constantly on the brain.  At least his mind’s normally obsessed with song lyrics, but lately he’s becoming consumed with thoughts of bandmate Lexi (his best friend Jase’s little sister).  They’ve known each other since they were young and he’s always felt protective of her, but he doesn’t want to ruin his friendship or harm the band so he’s been struggling with his burgeoning feelings for years.  One rainy night though, and a week of just the two of them alone together, has their long-hidden feelings rushing to the surface while bringing past pain to the forefront.  Keeping secrets and dealing with the past weighs on their relationship and soon leads to a rollercoaster of emotions that could end their band and their close-knit connection.  Ryder’s a sexy man with a tragic past that broke my heart.  It’s made him overly protective and ashamed of his reactions to this defining moment of his life, a moment that tore his brother’s lives apart too.  Ryder’s a man with strong convictions, a man who wants to boldly claim Lexi after years of keeping his feelings to himself, so Lexi wanting to keep their relationship a secret bothers him greatly.  Seeing his alpha side emerge when Lexi was around other men endeared him to me too and put a smile on my face.  His guilt over keeping their secret showed him to be an honorable man despite his behavior after the tragedy that still affects him today.

Lexi Evanovich has always loved Ryder.  From the moment he first rescued her as a young girl she’s always been attracted to him and when the opportunity arises to finally show him how she feels she dives in wholeheartedly.  Like him, she has something in her past that weighs on their relationship and makes their HEA less than certain as the story progresses.  Through numerous emotional ups and downs readers will feel completely invested in her and Ryder, rooting for them as she’s a constant temptation to him.  Theirs is a relationship meant to be and with each turn of the page past pain is holding them back from a future together that only by dealing with the past will get them to their HEA.  Lexi’s a likable heroine, full of energy and a commanding presence on stage, while a bit insecure when off stage.  Her insecurities are especially on display when it comes to her erotic encounters with Ryder and it led to lots of frustration as she was reluctant to say what was troubling her.  Despite that I enjoyed the two of them together and was rooting for them to heal each other as the glimpses we get of their pasts made their journey to HEA all the richer.

On a whole this was a well-crafted series starter with larger-than-life characters, a vividly depicted rock star world, and a slew of emotions that kept Lexi and Ryder’s HEA in doubt until the very end.  They’re an engaging couple, fun and flirty in many of their interactions, and teeming with sexual tension as they evolved from friends to lovers. Their pasts had a big affect on how their relationship progressed and for Ryder in particular it was heartbreaking as the closer they got to each other the stronger his fear and protectiveness became.  Surrounding this likable main couple was an equally memorable cast of secondary characters who had their own ups and downs throughout this book. Ryder’s brothers have left a lasting impression on me during their short time in the story.  Still recovering from the tragedy that had each of them giving into addiction in order to cope has me hoping to learn more about them and how they’re slowly rebuilding their bond, using the music that once connected them to find a close bond again.  Bandmates Jase Evanovich and Hit Man practically jumped off the page as sexy players who enjoy the benefits of groupies, unashamed and unapologetic with their indulgences.  Hit Man is especially notorious for his playboy antics, flitting from one girl to the next like a conveyor belt.  It’s stereotypical rock star behavior and it’s only through his charm that I was able to not hate him for it.  He’s got big changes in his life though too and I’m intrigued by how, or if, he’ll be changed which has me looking forward to his own story being told.  Hard Chord is a tight-knit band, more like family with their playful and protective interactions, and I’m now counting down the days until I can jump back into their world. 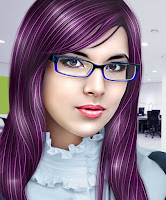 M. J. Roberts is a writer, editor, and teacher – with more than two million copies of her stories in circulation worldwide, Roberts is well loved for creating characters who feel as real as your most cherished friends. Roberts works to diligently to create believable, lovable characters, witty dialogue, prose ripe with metaphor, exciting plot twists, action that keeps you on the edge of your seat, and romance scenes that sizzle.
Roberts is a multiple award-winning author including first place in the prestigious Summer Lovin’ Romance Literary Contest 2015 for the novel Risk Your Heart.
Roberts also writes under the pen name Natasha Action. Roberts is originally from New York but lives in the southern United States for the purpose of endless comic material.
She’s married to a professional musician (A.K.A. The Rock and Roll God) because she is too busy tormenting imaginary characters and counting her blessing to pursue her longtime dream of Rock n’ Roll stardom herself.