Book Spotlight on A Phoenix is Forever by Ashlyn Chase (GIVEAWAY)

A woman looking to put her criminal past behind her decides to use her powers for good in this paranormal romance that finds her becoming attracted to the rookie cop hoping to use her psychic abilities to find a missing child.  Keep reading to get a tempting taste of A Phoenix is Forever by Ashlyn Chase, then add this sensual and suspenseful tale to your bookshelf.  In honor of this third installment in the Phoenix Brothers series make sure to fill out the form below for the chance to win 1 of 5 copies of the first book in this series too! 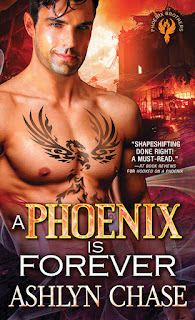 She didn't see this hot cop coming.
Dawn Forrest is ready for a big change. She's determined to put her criminal past behind her and only use her extraordinary psychic abilities for good from now on.
Luca Fierro is a Phoenix shifter and rookie cop with something to prove. The last person he should tangle with is a newly reformed bad girl, especially one as irresistible as Dawn. But he needs her help to find a missing child, and every minute counts. This case is going to put their skills to the test and force them to keep their sizzling attraction at bay... 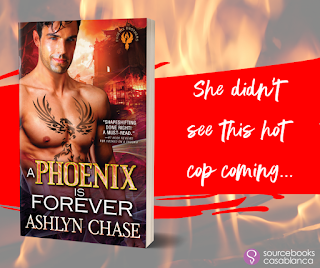 Award winning author, Ashlyn Chase specializes in characters who reinvent themselves, having reinvented herself numerous times. With a degree in behavioral sciences, she mainly worked as a psychiatric nurse and Red Cross RN. She’s happily married to her true-life hero husband who looks like Hugh Jackman if you squint. Visit her online HERE.