A man living with the ghosts of his past finds himself in a war with his desires to claim the strong-willed woman with issues of her own in this emotionally intense romance that will pull at reader’s heartstrings.  Keep reading to get a tempting taste of Keep It Classy by Lani Lynn Vale, along with my impressions of this scorching and suspenseful story, then add this seventh installment in the Bear Bottom Guardians MC series to your bookshelf 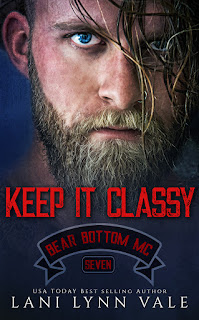 Ghosts are real.
Well, technically speaking, maybe not. But the ones that haunt a man’s soul? Those are very real. So real, in fact, that there are times when Castiel would rather silence them forever in the worst way possible than to go on living with them haunting his every step. All it took was one single second in time for his attention to drift, and everything changed. Life as he once knew it, is over.
Now he’s struggling to make sense of the pieces that are left, and he’s fairly sure at least half of them are missing.
He’s living for three things now.
His club—the Bear Bottom Guardians.
His work as a police officer for Bear Bottom Police Department.
And the occasional glimpse of a girl that makes his spirit feel free.
Despite the ghosts that haunt him, he’s not willing to present them with another target. Which is why he has to stay away from her. He can’t touch her. He can’t talk to her. He can’t get anywhere near her.
Not and live with himself afterward.
The only problem is, Turner doesn’t care what Castiel wants. She also has a solution for his ghosts.
You may call her Ms. Ghostbuster. 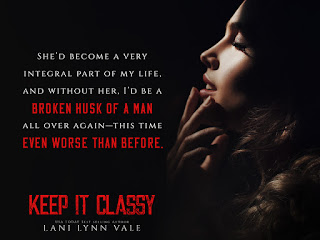 Readers return to the world of the Bear Bottom Guardians MC in this exhilarating rollercoaster ride of enemies-to-lovers.  Two people weighed down by their pasts find unexpected love and acceptance in a story that captivated me from the first page to the last, charming me and pulling at my heartstrings, as this immensely appealing main couple balances sweet and sexy moments with a bit of suspense.  With each turn of the page readers will become even more invested while waiting with bated breath to return to this colorful small town and its larger-than-life denizens.

When readers first meet Castiel it’s clear he’s a bit bitter when it comes to women.  He especially has issues with women who come from prosperous families.  Anger over his spoiled ex-wife’s demands on him, her incessant worries over their image, and her emasculating him by letting her father provide for her, have all left their marks on him.  He’s a more cautious person now, saddened over all that could’ve been and all that he’s missed out on as all those around him have found their own HEAs.  His past is what has him seeing Turner Hooch as the enemy in a combustible connection that becomes something more when tragedy upends her life.  He may start off acting as if he doesn’t like her, but it’s quite clear that he’s attracted to her and is in a constant battle with himself to keep his hands off her.  When she needs comforting most though he’s there to support her wholeheartedly while giving us a glimpse of his heart in a sweet yet sizzling start to something more substantial.  Castiel’s a sexy cop, supportive of his friends who are more like family, comfortable in his own skin after his ex-wife’s judgments of him.  Rare moments of longing when holding a friend’s child also shows a man who wants a family and a HEA of his own which charmed me completely.  Along with his burgeoning relationship with Turner comes a hunt for a serial killer in their home town that ends up coming close to home and added a bit of suspense to an otherwise sweet and sexy storyline.

Turner’s the daughter of NASCAR royalty, and a famous driver in her own right, which leads to her first confrontation with Castiel.  She may come from a family of wealth but she doesn’t let it define her as she takes pride in forging her own path by working in unconventional jobs.  From the outside her life growing up was good, but being overweight left her feeling like an outsider.  She’s never had a boyfriend, never been loved, and never been kissed out of passion.  Having gastric surgery may have helped her shed the pounds but she still sees herself as a big girl and it causes a few misunderstandings early on that had me aching for her.  She’s extremely close to her family too and when tragedy strikes them she finds her enemy the one person to help her get through it which binds them together in a scorching connection full of heart.  Turner’s an immensely likable heroine, realistic in her thoughts about weight, and bold in standing up for herself.  She’s an outgoing heroine who tends to keep her true feelings to herself out of fear that she’ll be hurt by others as most of her past has taught her.  Being with Castiel is freeing though as he encourages her in everything she does, accepts her as is without making a big deal out of things. On a whole they have a crackling connection that was a nice balance of sensuality and sweetness that had me rooting for them every step of the way.

Ms. Vale has crafted another winner in a series that’s given readers many likable couples throughout each new book, exhilarating bits of suspense, and scorching encounters that made me blush a time or two.  With this new release Turner and Castiel may start out as enemies but there was plenty of sexual tension surrounding them from the very start which made their transition into a couple all the more believable.  Theirs is a connection full of fun and flirty banter along with heartfelt talks and erotically-charged encounters that was entertaining to see grow more meaningful.  Along with this appealing main couple was an equally likable cast of secondary characters and couples who have become more like family as they’re a strong support for each other and rallied around this couple when they most needed help.  They’re a tight-knit group and it was heartwarming to see all of them together in a love letter to readers.  On a whole there was lots of good things in this book, but when it came to the suspense (which did do well in creating a creepy atmosphere) I was left slightly disappointed as this family-like group continually ignored the stranger amongst them.  This didn’t ring quite true but my joy over every other aspect of this story made it easier to ignore in a tale that will ultimately charm readers while keeping them on the edge of their seats.