In a romance of opposites attracting readers will find an unlikely hero full of conflict being drawn to a proverbial good girl and today you can learn even more about this book by visiting the other sites hosting this tour.  Keep reading to get a tempting taste of Salvatore by Cecy Robson, along with my impressions of it.  In honor of this gritty romance make sure to fill out the form below for the chance to win a $50 Amazon GC too! 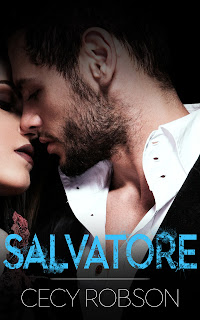 Desperate men do desperate things...
Salvatore Romero is a dangerous man. If you’ve lived the life Sal has, rage is to be expected and maybe so is heart. After his father killed his mother in a jealous rage, Sal was left to raise his two younger brothers, becoming a parent long before he was ready.
Desperate for money to support his family, Sal sought help from his old friend, Vincent Maggiano, the son of New Jersey’s top crime boss being groomed to take over his ailing father’s empire.
Sal never planned to join the mob. He also never planned to fall for his brother’s sweet and ultra conservative counselor, Adrianna Daniels.
Aedry isn’t the type of girl Sal is usually drawn to. Her skirts are longer, her hair is tamer, and her heels aren’t clear. But he can’t deny the attraction he feels. And Salvatore’s dark, sexy, and dangerous persona is the exact opposite of the clean-cut business men who usually catch Aedry’s attention.
Neither planned on a life of crime nor did they plan on love. But now, both are in too far.

I drive my trusty white Volkswagen Beetle through one of the rougher sections of the city, but when my navigation system takes me past the area and into one of the more up and coming neighborhoods, I’m more than a little surprised. I find a spot across the street from the building when I realize the underground garage is strictly reserved for its residents.
Perhaps it’s better. It might be a nice neighborhood, but I avoid garages at all costs. I make my way quickly across the street, shuddering when the brisk air smacks against my legs and billows my skirt. I stop in front of the main door. Unlike the other mailboxes, the Romero residence isn’t marked by a name. But I have the apartment number and that’s all I need. That, and access to the lobby, which I quickly gain when an older woman slips out.
The building can’t be more than a few years old, something I find confusing. If Mr. Romero can afford something this upscale, I don’t understand why he isn’t more invested in his brothers’ futures.
I tried calling him to warn him that I was stopping by, only to hear a deep male voice on the voicemail say, “You know what to do,” followed by a beep. The blatant arrogance in his tone shocked me and left me with an impression that this so-called guardian is nothing more than a thug. But given where he and the boys live, I can only determine he’s too caught up in himself to worry about those who clearly need him as a role model.
I slip out of the elevator and hurry to apartment 4B, stopping only to text Jalisa and let her know I arrived. I take a breath before knocking, reminding myself I’m a strong, educated woman despite my young age, and that there’s no reason to be intimidated. When only silence greets me, I tell myself I can’t just give up. This boy needs me, so I knock again. By my third knock, I’ll admit, I’m discouraged. How can I help Apollo if his one parental influence is constantly unavailable? I knock again, this time harder. If this Salvatore guy is truly a PR rep who works evenings, he should be home—
The door swings open. “What the fuck?”
My eyes widen at the bulk of muscle standing at the door. This man is at least six-two, shaved head, wearing black boxers that fall slightly below the “V” at his waist, exposing a set of abs hard enough to grind diamonds, and arms and legs that belong on a seasoned wrestler.
Now would be a good time for that confident young woman to make an appearance―the one who came here―the one whose jaw isn’t dangling to her toes―the one who no longer has glasses strong enough to see into orbit, or teeth so bucked they end in another zip code.
The man’s tight face and stance relax as he leans his shoulder against the door frame. His brown eyes rake the length of my body, the intensity in his stare forceful enough to tug off my clothes. It’s not until his attention returns to my face that I catch his approving nod and subtle smile. “Nice,” he murmurs.
My face heats, which I absolutely hate. My skin is so fair, there’s no masking the blush that follows. I lift my chin. “Shouldn’t you put on some clothes?” I ask, well aware my voice is shrill and quivering.
“I would, but then it will block the view of the goods you can’t seem to get enough of,” he says, adding a wink.
It’s the wink that’s my undoing. Okay, that and those broad shoulders, and strong jaw, and Channing Tatum-esque face. Who am I kidding? It’s the whole package. This man is what some might call more than a little attractive.
“I . . .” It’s the only thing I manage to say. By now, it’s obvious I’m gawking at him.
“Look, gorgeous,” he says. “I’ve had a long night. Either leave your brochures and get going, or give me a reason to let you inside.”
My jaw pops open when I realize he’s mistaken me for a Jehovah’s Witness—and a slutty one at that! Maybe Tamira had a point about me wearing “church” clothes. “I don’t have brochures,” I stammer.
“Good, don’t read that shit anyway—“
“My name is Adrianna Daniels. I’m the guidance counselor at Apollo and Gianno’s school . . .” 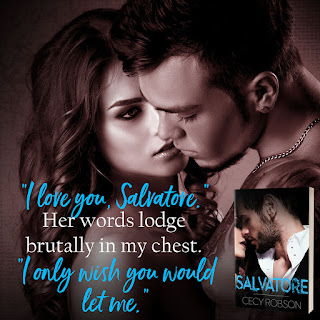 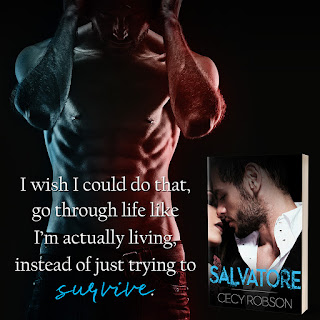 When it comes to romances set in the world of the mafia there seems to be a bit of familiarity when it comes to these books and Ms. Robson’s latest remains familiar but no less satisfying because of its larger-than-life hero.  In a romance of opposites attracting readers will find themselves captivated by the conflict of its hero and quickly caught up in a web of suspense and lies.

Salvatore Romero once had dreams of his own, but the murder of his mother by his father irrevocably changed the path his life was to have taken and led him down a dark path that leaves him feeling dirty.  It was a deal with the devil, agreeing to work for mobster Vincent Maggiano, that led him astray but it was a necessity in order to help him gain custody of his brothers after their mother’s murder and it’s his love for them that made the choice simple.  The pain of that murder though hangs over these three brothers, always weighing them down like an anchor and it’s what brings Sal into contact with a woman his complete opposite but who brings a bit of light to his darkness.  It’s a rocky road to HEA though for him and Aedry as he desperately tries to keep the truth about who he is and what he does from tainting her.  He longs to be the man she sees when she looks at him, but the secrets and lies make for a relationship that’s bound to bring heartache unless the power of love can prevail.  As a reader I LOVE bad boys and their sexy and dangerous vibe of power.  Sal has all that and more.  He’s protective and will do anything to keep those he loves safe and it’s that aspect of him that endeared him to me.  There’s a lot of darkness surrounding him though, his need to tell lies to keep Aedry in his life, that frustrated me but is par for the course in these kinds of books.  Sal may be predictable in his actions but his sweet moments with Aedry, and the sexiness that radiates off him, drew me to him despite all that he did in the name of the devil.

Adrianna Daniels is the proverbial good girl, someone with a big heart who just wants to help others, and it’s this need to help a young man with a tough home life that brings her to Sal’s doorstep.  It’s a crackling first meeting, one that changes both of their lives irrevocably, and brings her into a world that could put her in danger.  Aedry’s a likable heroine, one who puts on a brave face to do what she needs to do when helping others. She dives in without hesitation and while I applaud her caring side I can’t help but wish she had a stronger sense of self-preservation in her career.  When it comes to her heart too she blindly believes the stories Sal tells her which marred their connection a bit for me. That’s not to say that she always caves to the whim of Sal and those moments that she stood up to him and his desires had me cheering and made for an even more scorching relationship.

On a whole this was a satisfying story with an appealing couple made stronger, and better, by being together.  Though they’re opposites in many ways they just felt right together and I especially liked seeing a softer side to Sal that arouse when he was with Aedry.  There’s much weighing on them from the outside world though, much that battered at their HEA, in a story that ultimately ends in a satisfying conclusion. Surrounding this likable main couple was an equally appealing cast of secondary characters whose stories I long to have told.  From Sal’s younger brothers to Luca there’s still plenty of stories left to tell and I look forward to where Ms. Robson takes us next. 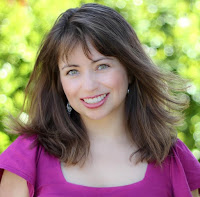 Cecy Robson is an author of contemporary and new adult romance, young adult adventure, and award-winning urban fantasy. A double-nominated RITA® Finalist, Winner of the Gayle Wilson Award of Excellence, and published author of more than twenty titles, you can typically find Cecy on her laptop or stumbling blindly in search of caffeine.