Book Spotlight on The Scoundrel in Her Bed by Lorraine Heath

A man born as a shameful secret finds a bit of happiness with a young lady far above him in status until secrets and lies pull them apart, only to have their reunion marred by even more secrets along with a bit of danger.  Keep reading to get a tempting taste of The Scoundrel in Her Bed by Lorraine Heath, then add this third installment in the Sins for All Seasons series to your bookshelf! 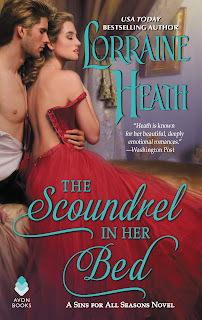 The bastard son of a nobleman, Finn Trewlove was a shameful secret raised by a stranger. As Finn came of age he had secrets, too--the clandestine nights spent with an earl’s daughter. But her promise of forever ended in betrayal.
Driven by a past that haunts her, Lady Lavinia Kent seeks redemption in London’s underworld, engaged in a daring cause inspired by the young man to whom she gave her innocence, and who then proved himself a scoundrel by abandoning her.
When their paths cross again, they can’t deny the yearning and desire that still burns. As they discover the truth behind the deceptions that tore them apart, Finn and Lavinia must fight to reclaim what they’ve lost, no matter how dangerous—because love is worth the risk….

“I could take you right here . . .against the wall, a trellis, on the ground.”
“And if we were discovered . . .” She couldn’t even begin to imagine the dire consequences that would follow. He wasn’t a nobleman, and what her father might do to him didn’t bear thinking about.
“It wouldn’t go well.”
When his mouth once again began a slow and sensual sojourn along her throat, she whispered, “Not against a wall or a trellis or on the ground. But in a bed.”
“What are you saying, Vivi?”
“I want you, Finn. I love you. Make me yours, tonight. Ruin me for anyone else . . .” 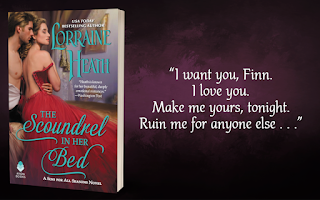