After a rollercoaster ride through the early stages of a burgeoning romance between two strong-willed people with painful pasts comes this exhilarating conclusion to a series full of danger and broken hearts.  Keep reading to get a tempting taste of Heart of the Devil by Meghan March, along with my impressions of this sexy and suspenseful read, then add it to your bookshelf.  In honor of this third and final installment in the Forge Trilogy make sure to fill out the form below for the chance to win 1 of 3 signed print copies of Ms. March’s complete trilogy too! 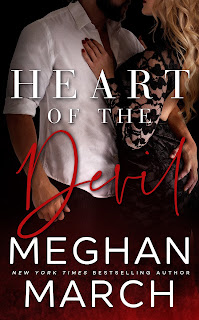 From New York Times bestselling author Meghan March comes the stunning conclusion to the Forge Trilogy. In this final volume, ruthless billionaire Jericho Forge faces his toughest challenge. To emerge victorious, he’ll have to give up the one thing he’s never offered a woman—his heart.
It started as a game. She was nothing but my pawn.
But I was quick to see the error in my ways, and now she is everything I never knew I needed.
The value of a woman like India Baptiste is beyond measure.
But the problem with being a man like me? I’ve already screwed this up, and there’s no guarantee India will take me on for one last bet.
I'll do whatever I have to do. Drop to my knees and offer her the only thing I have left. The one thing that’s only ever been hers—the heart of the devil. 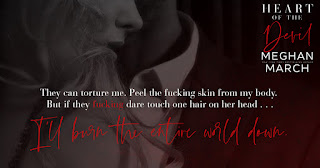 After the jaw-dropping conclusion of the previous installment in this series, readers are immediately caught up in the fear and suspense of the fallout from that conclusion the moment the first page is turned here.  Indiana Baptiste takes center stage in this story as she’s on a mission to prove her love to the strong yet emotionally scarred Jericho Forge in a journey that takes unexpected twists and turns.  As readers race to this book’s thrilling conclusion they’ll find that what they thought was true turns out to be anything but as there’s a fine line between hero and villain.

The moment I started reading this I found my heart pounding as readers are immediately on the run with Indy to find Jericho, using help from whoever she can find. That help comes from one surprising source as she finally comes face-to-face with the father she never knew about.  It’s a meeting that sheds light on the woman she called mother, gives other surprising truths about family, and had Indy flexing her muscles when getting him to commit to helping her.  It was an intensely emotional meeting that added another layer of surprise to a storyline full of surprises, a moment of introspection for both of them before more crap hit the fan.  Jericho too found out some unpleasant truths as he frantically made his way back to Indy that left him reeling and that had him making a poor decision in the name of honor.  It was a decision that left me disappointed in him, heartbroken as he truly deserved happiness but was scared of all the danger coming so close to Indy.  With each turn of the page emotions and danger were precariously balanced as readers got one step closer to the true villain.  It was a reveal that was a bit disappointing though, the reason behind the villainous attacks a bit silly, but it was definitely a moment that had me on the edge of my seat.

On a whole this was a satisfying read, a well-crafted series, that ended with a bang. Along the way we had lots of sexy moments as well as sweet words from a man unaccustomed to putting his heart on the line.  Jericho and Indy are a crackling couple, a formidable pairing with each giving as good as they got. Along with this appealing main couple was a large cast of secondary characters, some who were villains and some who just seemed like villains, and it led to a lot of blood and bodies on display.  Of all these secondary characters I’m still most fascinated by Sebastian de Vere, a broken and broke little rich boy, and I’d love to see more of this tarnished character in the future. Readers looking for a fast-paced read will find themselves drawn to this sexy and suspenseful story, yet another well-crafted trilogy from Ms. March, and it’s a story I recommend after the cheer-worthy conclusion found here. 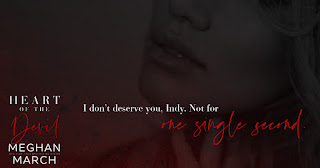 Making the jump from corporate lawyer to romance author was a leap of faith that New York Times, #1 Wall Street Journal, and USA Today bestselling author Meghan March will never regret. With over thirty titles published, she has sold millions of books in nearly a dozen languages to fellow romance-lovers around the world. A nomad at heart, she can currently be found in the woods of the Pacific Northwest, living her happily ever after with her real-life alpha hero.