A wolf sent away for being different finds a protector in the young woman who discovers him abandoned in the forest in this tale of superstition and fate.  Keep reading to get a tempting taste of Forever Wolf by Maria Vale, then add this paranormal romance to your bookshelf.  In honor of this third installment in The Legend of All Wolves series make sure to fill out the form below for the chance to win 1 of 5 copies of the first book in this series too! 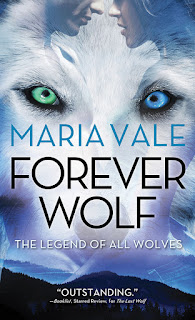 Born with one blue eye and one green, Eyulf was abandoned as an infant and has never understood why, or what he is...Varya is fiercely loyal to the Great North Pack, which took her in when she was a teenager. While out on patrol, Varya finds Eyulf wounded and starving and saves his life, at great risk to her own.
Legend says his eyes portend the end of the world...or perhaps, the beginning...
With old and new enemies threatening the Great North, Varya knows as soon as she sees his eyes that she must keep Eyulf hidden away from the superstitious wolves who would doom them both. Until the day they must fight to the death for the Pack's survival, side by side and heart to heart...

“There were gunshots,” Eyulf says as I clean out the reopened wound with a rag dipped in the last of the Seagram’s. “They could have hurt you.”
“Still, you shouldn’t have followed me. You could have killed them. Turn over? Wolves don’t reveal them- selves to humans, and they certainly don’t kill them unless it is a matter of the life or death.”
He turns onto his belly, and I start to pick out more embedded forest litter.
“But it was a matter of life or death,” he says. “They were shooting at you.”
“The life or death of the Pack. A single wolf means nothing.”
I pluck out several bits of fur. And a beetle wing.
“It does mean something. You mean something. You mean something to me.”
And small stones.
And a single pine needle. “I have to tell the Pack.”
“Are you listening to me?” He turns quickly, his hands on either side of my face.
“Your leg is—“
“Fine. My leg is fine. I could leave now and be no worse off. It’s what I do. A new place. Another page in my book. Except I would be worse off because now I know what’s here and what I want but don’t have.”
I stare down at the collection nested in my palm— stone, fur, wing, needle. Tesserae in the mosaic of the Great North. Of Homelands.
What have I done? Wolves are raised with uncompromising loyalty to Pack, to land and to our wild. Even our exiles would never betray our existence, but Eyulf was not raised like we are.
“You can’t tell anyone about the Pack.” My voice sounds panicked. Not at all like the Alpha command I’d intended. “You can’t—“
“I wasn’t talking about the Pack, Varya. That’s where your mind always goes, but not mine. I was talking about you.”
He bends down, looking me in the eye. How could anyone think his eyes were a curse? Blue and green. The promise of heaven and earth.
“I’m talking about you,” he says again.
He moves his hand to my hair and sweeps it back, touching my neck gently. He leans close. “You said before that another wolf’s mark had to be offered. That it meant they are responsible for each other. That they belong together. I want to belong. But not to the Pack. I want to belong to you.”
His thumb moves across my cheek and moves until his jaw almost touches mine, and then he stops. Waiting for me to say no or simply move away. I move closer, partly because I feel woozy and partly because this is what I want. I have only taken the Alpha’s mark, the mark that binds me to the entire Pack, but now…now I want this single scent, this single wolf, this single belonging.
Eyulf takes a deep breath and rubs his cheek along mine. “Is this how you do it?”
I feel everything: the coolness of his skin and the sharpness of his cheekbones and the cool eddy as he sucks in my scent and the warm current as he sighs.
Yes. That is how you do it. This—I turn my head so more of my skin touches his—this is how you do it.
He nuzzles closer, the damp softness of his lips against the spot where jaw joins neck, and I feel the promise of it all.
Then he whispers in my ear.
The weight is heavy on two legs, and the ground is uneven and cold and covered with rigid twigs that puncture and scrape my bare soles.
It’s good, I think. The distraction. Reminding me always of the harsh realities of Pack life. Surviving means strength to strength and power to power. It does not accommodate the coming together of two scarred and lonely wolves.
“Yours,” he said. “Mine.” 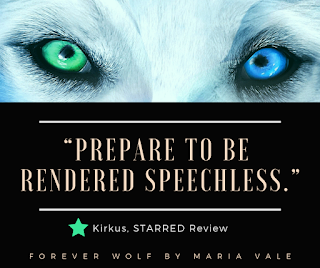 Maria Vale is a journalist who has worked for Publishers Weekly, Glamour magazine, Redbook, the Philadelphia Inquirer. She is a logophile and a bibliovore and a worrier about the world. Trained as a medievalist, she tries to shoehorn the language of Beowulf into things that don't really need it. She lives in New York with her husband, two sons and a long line of dead plants. No one will let her have a pet. Visit her HERE.