Two people who have always pushed each other’s buttons find themselves falling for each other in a romance weighed down by familial expectations.  Keep reading to get a tempting taste of Frenemies by Nicole Blanchard, along with my impressions of it, then add this sensual tale to your bookshelf.  In honor of this second installment in the Friend Zone series make sure to fill out the form below for the chance to win a signed paperback of the winner’s choice from the author’s backlist too! 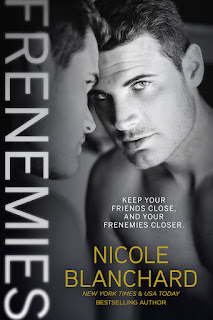 Dashiel Hampton is her enemy.
Layla Tate reminds herself of that fact every morning she goes to class and sees his smug face smirking up at her. There hasn’t been a moment they weren’t pitted against each other and she refuses to back down…not even when she learns he’s the teaching assistant for the new class she’s taking.
Layla Tate is going down.
There is nothing that makes Dash Hampton as happy as the look on Layla’s face when she realizes he’s won. He lives to drive her crazy because if he can’t have her beneath him, then he’ll have her any other way he can. He’ll get her to notice him, even if it means making her semester a living hell.
When their classroom rivalry crosses the line between frenemies and forbidden, the hardest lesson they’ll have to learn is that sometimes you have to lose to win.

“I said I was a virgin, Dash, not that I was completely inexperienced.”
With that statement, Layla straddled me in one swift movement that had my eyes popping open and my hands settling on her hips. “What are you doing?”
She fitted her mouth to my neck, and I arched back, but there was nowhere to go. “You’re crazy if you think you aren’t good enough for anyone.”
Sweet mother of God, I could feel the heat of her through my jeans and the strain of my dick against my pants was going to send me to an early grave. “That’s a veritable compliment coming from you.”
“I’m pretty sure it was a compliment.” Her fingers begin mapping my shoulders, tracing my chest, and I wondered if I was in heaven or hell.
“I always knew you were sadistic,” I managed to say.
She let out a throaty giggle. “I think you’re masochistic because you sure seem to like it.”
My hands bit into her hips. “Oh, I like it, but you need to stop.”
Layla ground down onto my erection. “Are you sure?”
“Christ, Layla,” I bit out, then drove my fingers into her hair. I took her mouth with a violence that shocked the both of us. After a few moments, I broke it off. Breathing hard, I asked, “What do you want from me?” I wanted to tell her, take it, you can have whatever you want, but I didn’t think she was ready for that. 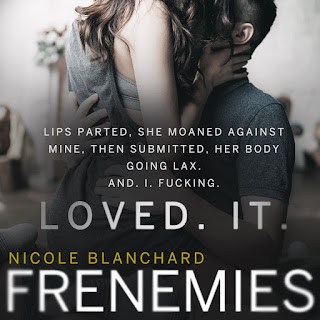 After reading the first book in Ms. Blanchard’s Friend Zone series I was immediately charmed and wholeheartedly on board for the rest of this likable group of friends to find their HEAs.  In this latest installment two people weighed down by familial demands struggle to find their place in the world while finding an unexpected romance between lifelong frenemies.  From start to finish witty banter is balanced with erotically-charged interactions that put a smile on my face and a blush to my cheeks in a story that had me wanting to read it again once I turned the final page.

Dashiel Hampton has always been a success, from being at the top of his class when it comes to smarts to being labeled one of the sexiest bachelors.  He’s always been the smart one, the reliable one, and the one his family line rests their dreams of the future on.  Because of his sexy looks and family name he’s never known a moment of not getting what he wanted...except when it comes to the smart and sassy Layla.  He and Layla have been adversaries since they were young and he always came out on top which angered her and has kept them at war ever since.  Finding out she’s taking a class he’s teaching thrills him and tempts him like never before, and with each day he sees her he wants her all the more.  Flirtations, snarky banter, and surprising moments of tenderness soon has them starting a forbidden romance that could lead to trouble for both of their futures.  Despite the risk of discovery though they can’t help themselves as they forge a rocky path full of doubts and fears towards HEA.  Through it all Dash is an utterly delicious hero!  From the outside he’s a sexy beast full of charm, a man who comes from wealth and who has a bright future ahead of him.  With plans set forth by his family he’ll take his place in the public eye as the perfect spokesman for the Hampton name.  What Dash wants though is something very different.  He’s tired of being wanted only for his looks and name and wants to be wanted for who he is behind the facade.  Layla’s the one woman to never cave to his wants, the one woman to challenge him at every turn and who never expects more from him than being her adversary.  Being with her lets him be himself and it made their interactions crackle. When he was around his family there was a weight on him, but being around Layla brought out a carefree and playful side that drove their romance and endeared him to me.  To the world Dash seemed to have it all, but the pressures his family put on him broke my heart.  While letting his younger brother have a life, they pushed him at every turn when it came to his career and his love life.  It was their machinations that put doubts in Layla’s head early on about their future and it made me very protective of their pairing as they were wonderful together.

Layla Tate’s always come in second best to Dash and it’s fueled her anger for him from an early age.  As she’s gotten older though that anger is now paired with attraction. With her future on the line she can’t afford to put her grade in jeopardy so each day of him teaching her class becomes even more torturous as he does all he can to push her buttons.  In moments of introspection she can admit he’s sexy and charming-when he wants to be-and it’s becoming harder and harder to ignore the sensual vibe he constantly sends her way which is why it’s not long before they’re engaged in a forbidden romance that will change both of their futures irrevocably.  Layla’s a wonderful heroine, smart and strong-willed.  With Dash she gives as good as she gets and their banter felt more like foreplay.  As adversaries their banter was funny and snarky and it led to a seamless transition to lovers as their interactions with each other sizzled from their very first meeting.  Layla might not have much experience when it comes to the bedroom but with Dash she turned into a sex kitten.  Their erotic encounters were empowering to a heroine always made to feel inferior by her own family and by those who saw her as just a studious librarian-type.  Being with him made her more inclined to go after what she wanted and it had me rooting for her every step of the way.  Helping her through all her ups and downs were her supportive and equally likable girlfriends, Charlie and Ember. This trio is easy to relate to and it’s easy to see them as one of your own friends as they’re ready with alcohol and chocolate when times get tough.  There were many times when Layla needed their emotional support, especially after talking to her mother who cut her down at every turn while pushing her to live a life she wanted. Her mother’s words were hurtful and these familial pressures were another thing to bind her and Dash together as they both tried to find their own way under the weight of family expectations.

From start to finish I was completely captivated by this story and it’s delightful main couple!  Through witty banter and scorching interactions I was captivated by this pairing and rooting for them to overcome the outside forces weighing on them as they tried to find their own place in the world.  Together they were a formidable pair, while apart they were left with doubts because of familial pressures that had me hurting for them as family can be the most cutting when it comes to defining success.  Along with a romance that weathered a few emotional ups and downs along the way, readers got a glimpse of the past pairing between Charlie and Liam (still going strong and blissfully happy) and the break-up of Ember and her long distance boyfriend that’s now opened the door for their mutual friend Tripp to step through.  This is another romance I’ve been longing to see come to fruition and in the crafty hands of Ms. Blanchard it promises to be another winner. 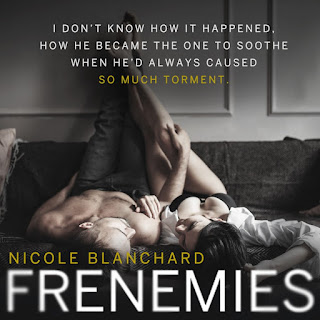 OTHER BOOKS IN THE FRIEND ZONE SERIES:

FRIENDS WITH BENEFITS (Book #3)
Releasing on May 28th
FIND AT GOODREADS here.
BUY AT iBOOKS here.

Nicole Blanchard is the New York Times and USA Today bestselling author of gritty romantic suspense and heartwarming new adult romance. She and her family reside in the south along with their two spunky Boston Terriers and one chatty cat.