A woman heading towards a new life as a mail order bride finds herself unexpectedly paired with the man she agreed to marry while trying to survive after a stagecoach accident that has them growing closer together.  Keep reading to get a tempting taste of Saving the Mail Order Bride by Linda Broday, then add it to your bookshelf. In honor of this second installment in the Outlaw Mail Order Brides series make sure to fill out the form below for the chance to win 1 of 3 copies of this book too! 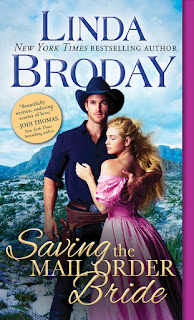 When the West was wild
And man's law favored the few
These extraordinary women could be found...in the heart of an outlaw.
He may be a wanted man, but all outlaw Jack Bowdre ever desired was a second chance. Now he's on his way to jail, completely unaware that his unexpected—and unexpectedly beautiful—traveling companion is none other than Nora Kane...his mail order bride.
It's too bad Nora doesn't know Jack is her groom-to-be. All she sees is a scoundrel. But when their stagecoach crashes and the truth comes spilling out, they're suddenly left to fend for themselves—and each other. The longer they're together, the stronger their feelings grow. Hounded by desperate men bent on doing them harm, Nora and Jack will do whatever it takes to find their happily ever after...but first, they'll have to shake the devil from their trail.

“When will we reach Saint’s Roost?” Refinement echoed in his fellow passenger’s voice.
Definitely not Jack Bowdre’s type. He preferred women a little rough around the edges. To him the fun was smoothing those over a little. Not too much though so they wouldn’t get the notion they were better than him.
With his free hand, Marshal Dollard reached for his watch that hung on a gold chain and flipped it open. “Another hour or so, ma’am. Frankly, I can’t wait to get this stinkin’ outlaw behind bars. Every marshal, sheriff, and bounty hunter in the state has been hunting him for years. Last count he’s killed over fifteen men. He’s one dangerous hombre.”
Jack rolled his eyes and bit back a curse. It depended on who you asked. The men he’d killed would agree most heartily that he was dangerous, but he never shot without a reason and once he pulled his gun, he meant to send them to hell. He’d never been sorry, except for once. His breath grew ragged with the recollection. He pushed the pain aside and inhaled.
The lady didn’t appear one bit afraid—not in her manner and not in that firm voice.
The coach jolted and shifted, jarring Jack more. The driver shouldn’t be going at such an unsafe speed. Stagecoaches were notoriously top heavy. But that was beyond Jack’s control. In fact, quite a lot was at the moment.
A sigh of regret escaped. Tomorrow would be his wedding day. His mail order bride would arrive in Hope’s Crossing about sundown today and he wouldn’t be there to greet her. Unless he got to the Colt, he’d be sitting in cell, sleeping on a thin mattress stretched on a cement slab.
The pretty lady fiddled with her light blond hair which was near perfect. The curve of her jaw and elegant neck drew him. Very kissable. His lazy gaze slid over her body—what little he could see that is. What he saw definitely intrigued him. He nudged his knee ever so slightly until it touched hers. The light connection sent unexpected pleasure coursing through him.
Anger flashed from her eyes and she shifted in the seat, breaking the contact.
In an effort to stifle the boredom and to ruffle the lady’s cool gaze, Jack caught her looking again and winked.
She gasped and if her stare was a sharp knife, it would’ve impaled him.
The stagecoach careened around a corner. Then slid sideways. Jack waited for the slide to stop only it kept going, throwing him against the marshal. He grabbed for something to hold to, which ended up being the lady. She screamed. In the bedlam outside, the team of horses screeched in terror and the driver yelled curses, trying to right the stage. The wooden coach cracked and groaned as it fell, tumbling, cartwheeling down an embankment. The sides caved in, the whole wall breaking apart.
All Jack could do was hold on and pray to reach the bottom in one piece. Pain pierced his leg that still carried a posse’s bullet from a few years back. He let out a yell. His head cracked against something solid and, for a minute, stars twinkled in his vision.
When what was left of the coach finally settled, he slowly moved his legs then arms but the lady passenger lay on one side of him and he was trapped on the other by the marshal’s thick body,half on and half off the seat. Jack yanked on the manacles which didn’t give. Pain shot up his arm.
Dollard’s sightless eyes were open and his mouth hung slack. A piece of wood protruding from his chest said there was no need trying to save him.
Jack lowered the man’s eyelids with his free hand and turned his attention to the woman’s low moans. “You all right, ma’am?”
“What happened?” She pulled to a sitting position, holding her forehead from which blood trickled. Her hat that tied under her chin with a pretty green ribbon sat askew, the bird’s nest hanging over one eye. She shoved it back.
“An accident. We rolled down an embankment would be my guess. The marshal’s dead.” He tugged at Dollard’s large girth again but couldn’t free himself. The six-inch chain was twisted around the man’s arm and pinned beneath his body. “I need your help. Do you think you can?”
“Can what?” She appeared dazed. Maybe she also struck her head.
“Get the key to these manacles from the marshal’s vest so I can free myself.” When she didn’t budge, he tried again. “Please get the key from his vest pocket. I’d do it but my arm’s trapped.”
Finally, she appeared to slowly comprehend the situation and crawled to the marshal. Though she seemed calmer than most women, her hand trembled as she searched. The first pocket had nothing. She tried the other side and pulled out a small brass key.
“Good. Now give it to me.” He would be loose in a moment. By the time help arrived, which shouldn’t be long since this was a well-traveled road, he’d be gone.
But she shook her head. “No, I’ll unlock it. I can do that much.” She stuck the key into the lock of the marshal’s hand cuff and it swung open.
“Good. Now hand me the key.”
She stared at him a second through wide eyes. In a swift move, she yanked the chain free and, before he could utter a word, snapped the other end on her own wrist.
Hell and be damned! “What are you doing?” He tried to grab the key from her.
“You’re crazy if you think I’m going to let you get away. I’m safer with you than those rattlesnakes the marshal mentioned.” Then she did the unthinkable. She drew back her arm and pitched the key out the smashed side before he could blink. 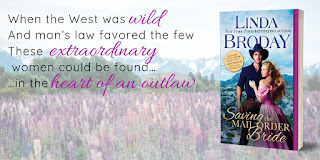 FIND OUT MORE ABOUT MS. BRODAY AND HER BOOKS here.