It’s a romance full of temptations as an ex-convict finds himself drawn to the outspoken woman living next door as danger and suspense leads to surprising twists and turns.  Keep reading to get a tempting taste of F-Bomb by Lani Lynn Vale, along with my impressions of it, then add this ninth installment in the Bear Bottom Guardians MC series to your bookshelf too! 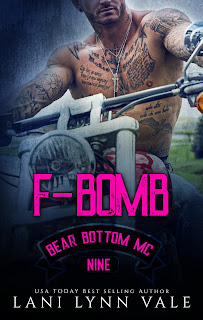 You murder a man, and all of a sudden people are scared of you.
Slate Solis went from being a guy that people went to in times of need to an ex-con that people crossed the street to avoid being too close to.
He knows he’s done wrong, but out of all of his sins, only one really bothers him—coveting thy neighbor’s wife.
Harleigh Belle—the cute little lady that never gives him a second glance.
After seeing her for the first time while he was in prison, she’s stayed on his mind for three long years. Each time she comes in to visit with her friend on family day, he can’t help but stare.
Then the day comes that he’s set free, and he’s almost disappointed that he’ll never see her again. Except fate has different plans.
He hasn’t been back in his house for more than three hours when he sees her.
Harleigh Belle in all her glory…oh, and her husband that is everything Slate isn’t.
He tells himself that her being fifty feet away from him, all day every day, is a complete coincidence. One that he shouldn’t take advantage of. The more time passes, the harder it gets to stay away. Until one day, and one very ill-timed thunderstorm, ruin everything.
Who knew that baby-making-weather was a real thing? 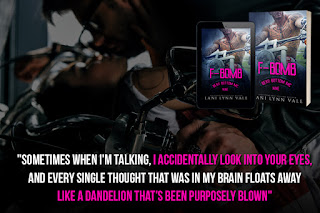 It’s a scorching tale as opposites attract in this ninth installment in the Bear Bottom Guardians MC series that kept me glued to the pages from start to finish.  Along with its combustible romance comes an immensely appealing main couple as well as bits of increasing danger that had this story racing to a very satisfying conclusion.

Slate Solis has had a life full of heartbreak.  From his teen years where he turned his back on an athletic scholarship in order to help with the family business to his act of revenge in honor of his murdered fiancée, Slate’s clearly a man who’s protective of others.  His time in jail, where readers first met him in his sister Izzy’s story, saw him taking on a role of informer to aid the MC as there were plenty of bad guys who needed to be brought to the kind of justice only the MC can dispense.  Now out on parole he’s just trying to find his place, figure out what he wants to do with his life, without putting his heart and soul on the line ever again.  Being an ex-con, big and intimidating, means instilling fear in others and furthers Slate’s wanting to be left alone.  While being betrayed by love in the past has him leery of forming any new attachments, it’s not long before his sassy neighbor wins him over.  He and Harleigh have a crackling connection, starting off as snarky enemies before becoming oh so much more in a charming tale teeming with sexual tension.  Through it all Slate’s a delicious hero.  He may start off cold but Harleigh quickly gets him to warm up and as they grow closer a sweeter and more tender side to him emerges.  As he and Harleigh become more invested in each other readers learn new secrets about his past that made me ache for him and as the story races to its thrilling conclusion even bigger truths are discovered.

Harleigh Belle’s a character who readers have seen grow up and her journey to adulthood has been a memorable one with strong-willed parents and an equally supportive group of bikers who’ve always watched over her.  Lots of love and acceptance permeated her life, but there was one dark act that’s left its mark on her soul and has her fearful of sleeping alone in a dark room.  It’s this quirk that brings her close to Slate and causes fireworks in a battle that has them starting out as antagonists.  Late night talks, and a near death experience, soon has these two bonding on a deeper level that takes an erotic turn involving their hearts and dreams of the future.  When danger from Slate’s past comes calling though their HEA is put in jeopardy as a jaw-dropping truth is revealed. Harleigh’s an immensely appealing heroine, one who gives as good as she gets. She might be tiny in size, but she’s mighty in attitude as she’s quick to push Slate’s buttons.  Like him, she too is protective of those she claims as hers and it’s her desire to protect a friend that first puts her on Slate’s radar.  From there they engage in a combustible battle of wills that seamlessly turns erotic as the story progresses. Through it all I was rooting for this tiny ball of energy that stands up for herself and for Slate while staring down a villain.

There’s a certain formula when it comes to a Lani Lynn Vale book, a formula that’s entertaining and a nice balance between romance and suspense.  It’s a formula that I’ve come to count on and that works for me completely courtesy of the larger-than-life characters, scorching encounters, and edge of your seat suspense.  Witty banter and a sizzling connection makes Slate and Harleigh a main couple you can’t help but root for and I enjoyed their sensual tug of war. Alongside this likable main couple was an equally entertaining cast of secondary characters, the men and women of the Bear Bottom Guardians MC.  These characters were protective with interactions that gave off a familial vibe that has me greatly anticipating the next installment in this exhilarating series.  One character who especially caught my eye was Harleigh’s brother Dax, a bitter and mysterious military man who’s been betrayed by love repeatedly.  Though this book is part of a series it stands strongly on its own in a riveting tale that had my heart racing at times and that has me counting down the days until the next installment hits bookshelves! 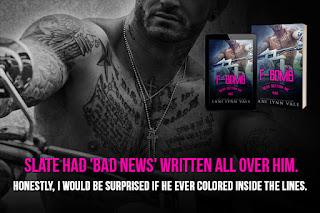