It’s a scorching and angsty tale set in the world of college baseball that will keep readers fully invested in the hard-fought HEA between two friends whose fake relationship quickly turns serious.  Keep reading to get a tempting taste of The Game Changer by Jaqueline Snowe, along with my impressions of this entertaining contemporary romance, then learn even more about this book by visiting the other sites hosting this tour.  In honor of this second installment in the Cleat Chasers series make sure to fill out the form below for the chance to win a $15 bookstore GC too! 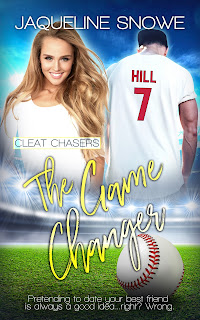 Pretending to date your best friend is always a good idea…right? Wrong.
Greta Aske has a lot on her mind, and a string of bad dates has her giving up on men, at least for the time being. Her life contains a little too much drama, meaning she needs a break and to save money and get good grades. The perfect solution presents itself—pretend to date the campus playboy. That’ll keep the guys away for sure.
Aaron Hill is desperate to save his baseball career because, with his dad fighting cancer, he damn well knows he can’t ask for a single penny from his parents. Baseball is his past, present and future, so when a scandal threatens his chance in the MLB, he turns to his best friend for help. A fake relationship will keep him out of trouble. It’s perfect, really. Greta’s taking a break from dating and Aaron needs to focus on training.
Nothing could go wrong…as long as neither falls for the other. But when lines are crossed, what’s real and fake blurs and the two are forced to face their fears. Could Greta be the game changer Aaron needs?

“You look great.” I pulled her down the stairs and opened the passenger door for her. “You always look good, G.”
“Aw, thanks, pookie.”
“Pookie?” I paused, giving her an irritated glare. “Hell, no.”
“I’m trying out nicknames. I would have a nickname if you were my boyfriend.” She raised her eyebrows, making me feel like a dumbass.
“You already call me A-a-ron and Ronnie. Those are nicknames.”
“No shit, Sherlock.” She chuckled. “Friend nicknames. I wouldn’t be calling my sex toy Ronnie. It is the least sexy name alive.”
I frowned. It was unsexy. “Fair enough. But Pookie isn’t it.”
“Then back to the drawing board. Stop stalling. Mama needs some pancakes.” She patted her belly and pushed me out of the way. She then shut the door in my face. I laughed. God, it felt good.
I slid into the driver seat and saw her studying me with one lip sucked into her mouth. “What?” “Just being honest here, but it literally looks like you have a stick shoved up your ass. No one is going to believe this is real.” She pursed her lips and shook her head. “Nope. Major stick in the ass face going on.”
“That isn’t a thing.” I started the car, but she put her hand on my leg. I looked at it, taking my time turning toward her again. “Ronnie, you need some fun in your life. Do you trust me?” “Yes,” I said without question. “Why?”
“Let me drive. I have an idea.” She stuck out her lip, pouting. Those damn brown eyes didn’t help either. I was pretty much ruining her life for six months so, sure, I could let her do whatever the she wanted.

Readers will find themselves charmed by this tale of friends whose fake relationship soon becomes all too real in a scorching story full of witty banter that put a smile on my face. Taking place in the world of college baseball, readers will find themselves fully immersed in the stresses of trying to make something of yourself while dealing with matters of the heart.  While cheering on this immensely likable main couple readers will find other characters worth rooting for in this latest installment in a series full of heart and soul.

Aaron Hill’s a promising shortstop for his college baseball team when compromising photos of him are released on the internet.  The photos are a year old and the result of him trying to escape from his fears over his father’s cancer diagnosis.  Their release though threatens his future, both in college and in the pros, and has him formulating a plan that will change his life irrevocably. Having his best friend Greta play his fake girlfriend seems simple at first, but it’s not long before their fun and flirty banter turns more intense.  To a man who’s always guarded his heart, the feelings Greta engenders in him catches him off guard in his angst-fueled journey to HEA.  Through it all Aaron’s an endearing hero who owns up to his manwhore past, owns up to his past partying as a way to forget about his father’s cancer.  Leading a charmed life until the diagnosis had him acting out all the more and the release of these pictures has him wanting to change as he doesn’t want to disappoint his family again.  To prove that he’s a changed man means having a committed relationship, and the longest relationship he’s had is with Greta, which made for a seamless transition of friends to lovers.  Aaron’s always been protective of Greta, always shares everything with her, so their close friendship felt believable as it became more. While he’s always been popular with the ladies there were times that he was less than suave around Greta, times where he put his foot in his mouth.  There were times too where he let jealousy and quick judgments lead him astray. Despite those moments though I just adored Aaron, cluelessness and all, and thoroughly enjoyed watching love creep up on him.

Greta Aske‘s a wild child, bold and bubbly.  She tends to see the bright side of life and being around her makes people happy.  She too went through a period of partying, a period of poor choices, so she’s quick to accept her role as fake girlfriend to help Aaron. After a slew of bad dates she’s happy to be off the market and embraces her role, making it her mission to clean up Aaron’s bruised reputation and bring back the joy to his life that his father’s diagnosis dimmed.  In her role as fake girlfriend she pushes Aaron to embrace things he’s scared of head-on while keeping the manipulative ”Cleat Chasers” at bay.  In a slow and steady evolution, what was once friendly and flirty banter soon takes a more sensual turn.  Though she promised not to let their fake relationship ruin their real friendship, it’s clear that lines became crossed and hearts became invested which led to heartbreak and a bumpy ride to HEA.  Greta’s an appealing heroine, strong-willed and outgoing with her words and deeds.  She’s a good friend too, supportive and caring to those closest to her as she would sacrifice everything to see them happy.  Some heroines I’ve read of were demure when it came to matters of sex, but Greta’s bold there too as well as unapologetic of her desires which made for many scorching interludes.  All in all she’s a memorable heroine who was a perfect match to the hero and who I wish other heroines were more like.

The theme of friends to lovers is a favorite of mine and done very well here courtesy of the likable main couple and their fun and flirty banter.  Though some of the storyline was predictable I still found myself charmed and rooting for this couple as their pairing was thoroughly entertaining.  Their banter was playful early on and seamlessly turned scorching as the story progressed in scenes that almost overheated my tablet.  While fears and holding back caused a bump in their journey to HEA, it was their talking and a final Grand Gesture that left me smiling in a tale that felt comfortably familiar. Alongside this likable main couple was the main couple from the previous book and I enjoyed getting an update of their relationship while getting a tempting glimpse of other “players” whose stories need to be told.  The most tempting of Aaron’s teammates are Tanner (who has a slightly complicated past with Greta) and Jeff (who’s young and clueless, but means well) and I’m now counting down the days until we go back to college and the storytelling of Ms. Snowe that nicely balances sports and romance to craft satisfying action on and off the field! 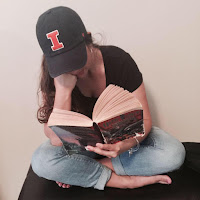 Jaqueline Snowe lives in Arizona where the "dry heat" really isn't that bad. She identifies as a full-blown Gryffindor and prefers drinking coffee all hours of the day. She is the mother to two fur-babies who don’t realize they aren’t humans. Her life revolves around balancing her day job in education and her incessant need to write and explore the world with her wonderful baseball-loving husband.