Book Spotlight on Under the Northern Lights by S.C. Stephens (GIVEAWAY)

A woman devoted to photographing nature finds herself trapped in the middle of nowhere and relying on the help of a mysterious man stuck in the past in this contemporary romance full of self-discoveries.  Keep reading to get a tempting taste of Under the Northern Lights by S.C. Stephens, along with learning more about this book from the author, then add it to your bookshelf.  In honor of this emotional and sensual romance make sure to fill out the form below for the chance to win a digital copy of this book along with a $25 Amazon GC too!

Cabin Fever - Finding Love in the Wilderness...My latest book, Under the Northern Lights, is about Mallory Reynolds, a driven, passionate woman who is pursuing her dream of photographing wild animals in remote locations. On the way to her favorite spot in the Alaskan wilderness, the unthinkable happens—the engine on her plane stalls and she crashes. Mallory survives the crash only to find herself injured with limited supplies and no hope of returning home. Just when all seems lost, Michael Bradley, a mysterious mountain man, comes to her rescue.
Planning on being in the wild for just a couple of weeks, Mallory only brings a few important items with her into the wilderness—a gun for protection, survival gear, a limited amount of food, her cross necklace for her faith, and her most prized possession, her camera. After realizing that she’s going to be spending the entire winter in a secluded cabin with a stranger, she probably wishes she’d brought a few more items along with her. Things like a high-powered rifle, a chainsaw, a snow mobile, a lot more food, and even better—a satellite phone. 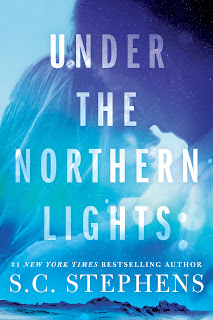 Mallory Reynolds is a driven woman fueled by her passion for photographing wild animals in remote locations. Every year she makes a trek deep into Alaska, but this time the unthinkable happens: she crash-lands after her plane stalls out in a storm. Injured, vulnerable, and threatened by the very creatures she loves, Mallory fears the worst—until she’s rescued by Michael Bradley, a mysterious mountain man living in self-imposed exile.
Mallory is grateful for Michael’s help but desperate to return home to let her family know she’s alive. Unfortunately, neither of them can leave Michael’s secluded cabin until spring. Mallory’s stuck with a stranger for months.
As Mallory recovers, a deep bond begins to form between the pair. Mallory is convinced that fate brought them together, but Michael is buried in his past, unable to move forward. Undaunted, Mallory tends to Michael’s heart as tenderly as he cared for her wounds—but will her love be enough to heal him? 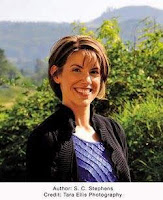 S. C. Stephens is a bestselling author who enjoys spending every free moment creating stories that are packed with emotion and heavy on romance. Her debut novel, Thoughtless, an angst-filled love story featuring insurmountable passion and the unforgettable Kellan Kyle, took the world of romance by storm in 2009. Stephens has been writing nonstop ever since. In addition to writing, Stephens enjoys spending lazy afternoons in the sun reading fabulous novels, loading up her iPod with writer’s block–reducing music, heading out to the movies, and spending quality time with her friends and family. She currently resides in the beautiful Pacific Northwest with her two equally beautiful children.