Get ready for the tears and the fears of the powerful romance between Blackie and Lacey that continues to get put through the wringer in this intense and realistic tale that kept me glued to the pages.  Keep reading to get a tempting taste of Blackout: Book Two by Janine Infante Bosco, along with my impressions of it, then add it to your bookshelf.  In honor of this second installment in the Leather and Lace Duet make sure to fill out the form below for the chance to win a $25 Amazon GC too! 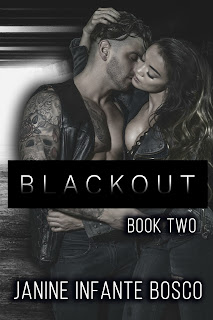 Once upon a time there lived a young girl, who battled depression and an older man who struggled with addiction. They fell head over heels in love with one another and foolishly thought their love could conquer all, that they’d beat the odds and live happily ever after. But some of the most tragic love stories are disguised as the greatest fairytales.
I thought we were past the pain, that we could finally be happy. I never imagined I’d be pregnant, alone and battling mental illness while my husband overdosed in prison. I also didn’t think he’d miss our daughter’s birth because a judge mandated him to rehab for ten months.
Now, he’s free and I’m broken beyond repair. Disconnected from everything I ever loved, including my newborn baby, I’m the casualty of another blackout.
Leather.
Lace.
Him.
Me.
Two tortured souls, navigating Hell, trying to find that happily ever after—wondering if it even exists. 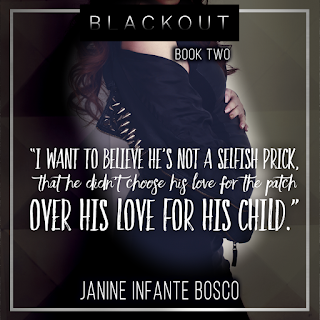 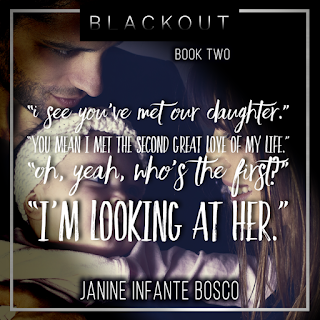 With each published book I became more and more invested in the men and women of the Satan’s Knights MC, became a member of this unique family of rough around the edges characters.  Their lives are messy, with danger around every corner, and it’s made their hard-fought HEAs even more rewarding in stories that kept me on the edge of my seat while pulling at my heartstrings.

This final tale is an epic one, as many of Ms. Bosco’s stories are, and couldn’t be contained in just one book with the action here picking up right where Book One left off...with Blackie going to jail while Lacey deals with pregnancy and her mental illness on her own.  From the first page to the last readers will find themselves held captive by this dark tale that deals with serious issues head-on.  At no point did Ms. Bosco sugarcoat the realities of prison life or the desolation and fear of coping with mental illness while being unmedicated.  For Blackie, his demons continue to weigh on him as he feels unworthy of the happiness Lacey offered him.  He doesn’t think himself capable of being a father, thinks he causes more trouble than he’s worth, and there were times where I feared his demons would win.  My heart broke for him quite often during his time in prison as he hit rock bottom trying to take the pain of his past and fears of his future away.  To the outside world he looks like a thug, but behind the bad boy facade is a loyal man with a heart of gold.  That heart still beats and it’s what belongs to Lacey still and drives this story when all hope feels lost.

Lacey’s no stranger to the dangers of the MC lifestyle as her father’s the notorious Jack Parrish.  She grew up around bullets and blood and it never deterred her from her desires because the moment she met Blackie she knew he’d be hers someday and set out to claim him.  It was a bumpy journey that put them (and readers) through the wringer and getting married should’ve been the end of their story.  But for these two it was merely the beginning as his fears led to a downward spiral full of doubts that culminated with his current incarceration that feels like a betrayal to Lacey.  Lacey’s a likable heroine, a heroine who’s grown up throughout the series and who’s now seeing things clearly.  She once thought that love was enough but now realizes that communication is vital and that her and Blackie hid too much of themselves out of fear.  I applauded her reaching that conclusion and was in awe of the strength it took for her to go through her pregnancy while battling the dark voices of her Maker (the same mental illness her father fights).  In scenes that were vividly depicted readers will feel Lacey’s loneliness and doubts as her pain becomes ours.  It’s a battle that will never end for her though and each day she overcomes her Maker is a reason to cheer.  As Blackie will never be completely healed either I find her to be the perfect match for him as they’re two hardened warriors just trying to find a bit of light in the darkness.

From the first page to the last this is a story that will require a few tissues along the way as readers are taken on a rollercoaster ride full of intense emotions where the lows are truly dark and the highs are full of joy.  Lacey and Blackie’s connection, and their love, is clearly put to the test throughout this story and there were times I wasn’t sure if they’d win.  In the clever hands of Ms. Bosco though I was given a realistic and unforgettable tale that I’m still thinking of. Every hurt, every moment of happiness was mine as well and it was a hard-fought journey to HEA that had me rooting for them every step of the way. Alongside this unforgettable main couple was a cast of equally appealing secondary characters who made this an even richer story.  The men and women of the Satan’s Knights rallied around this couple and were a strong support when they were needed most in roles that gave new meaning to the word family.  I especially enjoyed seeing more of Nico and his much-appreciated humor as well as Bishop and his particularly poignant support.  Even if you’ve never read a book in this series before you’ll find this a powerful and timely tale for the issues it deals with.  I encourage you to let this be the moment that inspires you to pick up the book that started this momentous string of books as it’s a series full of heart and soul....along with some pulse-pounding danger to keep you coming back for more.

THE PREVIOUS BOOK IN THE LEATHER AND LACE DUET: 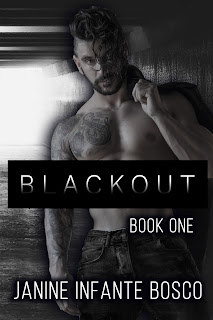 BLACKOUT: BOOK ONE
After years of struggling with alcoholism and drug abuse, I got clean and put my best foot forward. I became the man worthy of Lacey Parrish’s love and made the girl with the sad brown eyes my wife. But I’m not the only one in our marriage with demons. Diagnosed a manic depressive, Lacey struggles daily with her mind, never willing to succumb to the stigma of mental illness.
The odds have always been stacked against us, but the stakes have never been this high.
Pregnant with our child, Lacey is forced to choose between her mind and the baby we wished for.
I can take pain, but I can’t take hers.
Helpless and at the mercy of her illness, I turn to my past.
It’s always our favorite sins that do us in.
Leather.
Lace.
Me.
Her.
Suffering through hell, hoping love is enough for us to survive one more blackout.