Release Blitz for Sidewinders Ever After by Kat Mizera

Readers will find themselves back on the ice and back in the lives of the men and women of the Las Vegas Sidewinders courtesy of this collection of novellas that’s the twelfth installment in the series.  Keep reading to get a tempting taste of Sidewinders Ever After by Kat Mizera, a collection of tales set in the hockey world both on and off the ice, then add it to your bookshelf when it releases tomorrow and while it’s on sale for $0.99! 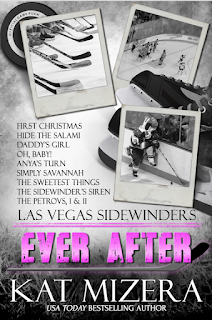 The Las Vegas Sidewinders are back with a selection of short, sweet bonus stories and two brand-new novellas!
FIRST CHRISTMAS - Join Dom and Molly as they celebrate their first holiday season as a couple.
HIDE THE SALAMI - When two pro hockey players babysit for a toddler, the results are hilarious.
DADDY'S GIRL - Erin, Drake and Shay travel east to say goodbye to a family member.
ANYA'S TURN - After surviving cancer, Anya faces a crumbling marriage and a slew of choices for her future.
SIMPLY SAVANNAH - As her baby's due date approaches, Tiff finds herself at odds with Zakk about the delivery.
THE SWEETEST THINGS - The long-awaited birth of Karl and Kate's twins comes with a terrifying price but the sweetest reward.
THE SIDEWINDER'S SIREN - Zaan and Lexi explore adulthood--and each other--even as their lives go in separate directions.
The Petrovs I (Toli & Tessa) - Three pregnancies in less than four years is more than Tessa can handle, but Toli's too busy with the playoffs to notice. Can he step up to the plate in time?
The Petrovs II (Anton) - When Anton Petrov comes home from college for the summer, his father's new nanny is not what he's expecting. 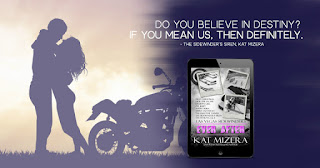 
Kat Mizera is a South Florida native. Born in Miami Beach with a healthy dose of wanderlust, she’s called Los Angeles, Long Island, upstate New York, Massachusetts, New Hampshire and Atlanta home. She’s never been able to pick which locale is her favorite, but if pressed, she’d probably choose the west coast.
Kat’s a typical PTA mom with a wonderful and supportive husband (Kevin) and two amazing boys (Nick and Max). When she’s not writing, she’s either scrapbooking or indulging in her second love (after writing) – traveling. Greece is one of her favorite places in the world. She loves that Athens is a big city with a small-town feel. The food, beaches and culture keep her going back as often as possible. She hopes to retire there one day so she can spend her days writing books on the beach.
Kat has been a working freelance writer for nearly 30 years. She sold her first article–a review of a rock concert–for $10 in 1985. Since then she’s been an entertainment journalist, waitress, bartender, legal assistant, food critic, magazine editor, substitute teacher, and sports writer. She also spent some time working at A & M Records in Los Angeles.
As you can guess from her series, the Las Vegas Sidewinders, Kat loves hockey. She is also a freelance hockey writer, covering her favorite team, the Florida Panthers, and any other teams that have an interesting story. The rest of the time, she writes novels: sexy, romantic fiction that she hopes makes you as happy as it makes her. There’s something enticing about hockey players and romance…