Reunited loves find themselves in the middle of danger as a famous star deals with a stalker and feelings from the past being reawakened in this sensual and suspenseful tale.  Keep reading to get a tempting taste of Code Name: Genesis by Sawyer Bennett, along with my impressions of this series starter, then add this first installment in the Jameson Force Security series to your bookshelf! 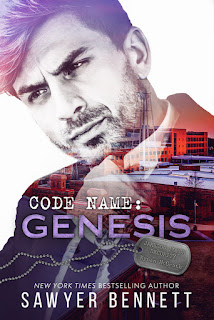 Years ago, they were in love. She was an up-and-coming superstar and he was the devilishly handsome security professional hired to keep her safe. They fell hard and fast, no matter how they tried to resist one another. But not everyone around them was happy about their relationship, and a string of lies and deceit destroyed what they once had.
Having just taken the helm of a nationally renowned protective services company, Kynan McGrath is looking to rebrand and revamp his career. The newly crowned Jameson Force Security is moving from the glitz and glamour of Las Vegas to the mountainous steel town of Pittsburgh, and the last thing Kynan has time for is to deal with his past.
More than a decade has passed since their split, but even a bruised and battered heart remembers its first love. So when Joslyn Meyers comes to him for help, Kynan reluctantly agrees to keep her safe from a terrifying stalker who keeps threatening her life.
As the danger they face continues to intensify, Kynan realizes he’ll stop at nothing to protect the woman who turned her back on him all those years ago. Because one thing is certain—no matter how hard he tries to convince himself otherwise, Joslyn still has his heart. 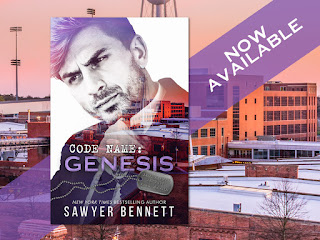 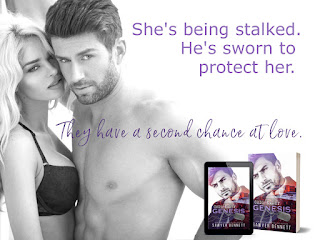 Having read Ms. Bennett’s Wicked Horse Vegas series I was already acquainted with Kynan McGrath and have been (not so patiently) waiting for him to take center stage ever since.  Between then and now readers have gotten two short stories full of the tempting Kynan, giving us a glimpse of his initial romance with Joslyn and its bitter end.  With this book he’s reunited with his past love, a woman he’s never forgotten or forgiven as she returns in need of his help from a stalker.  Once they’re reunited though sparks fly as danger creeps ever closer, putting her life and their HEA in jeopardy in a tale that kept me on the edge of my seat.

Kynan’s security firm is flourishing and ready to expand, taking on vastly different clients as they open a new branch out east.  Before starting this new endeavor though he agrees to take on one last client, a client who’s a blast from his past as she’s the one woman to have captured his heart before crushing it years ago.  He at first doesn’t want to take on her case but once he realizes how serious things have become for her he won’t trust anyone else with her safety.  No matter how hurt he was over her leaving him he can’t deny how much he still cares for her in a connection that never truly ended.  Being around her reignites all those old feelings and has him desperate to keep her safe, putting past misunderstandings behind them so they can finally figure out how their story is really supposed to end.  Kynan is the stereotypical alpha male, protective and sexy.  There’s always been an air of mystery surrounding him too and with his British accent I was frequently seeing him as James Bond.  In many ways he’s drool-worthy, but there were still moments where he frustrated me. His first time back in Joslyn’s arm’s was less than romantic, showed him to be continuing with his love ‘em and leave ‘me ways before fully committing to her in a boldly protective stance.  The biggest moment of frustration though was the way they parted years ago...he was a jerk in believing others instead of believing his heart.  It led to over a decade of wasted time that he now has the chance to make right...if only he can keep her safe from her stalker.

Joslyn Meyers was drawn to Kynan the moment she saw him all those years ago and for the short time they were together their passion burned bright before the machinations of another tore them apart.  She’s become a big star since then and at first she didn’t take the threats to her life seriously.  Now though she’s definitely scared and though she knows there’s plenty of hurts between her and Kynan she knows he’ll do everything he can to keep her safe.  Playing a couple to draw out her stalker puts them in very close quarters, gives them time to talk about what went wrong between them, and leads to lots of erotically-charged interactions that were nicely balanced with the suspense of finding her stalker.  Their time apart was painful but it gave both of them time to mature and for her especially it’s led to a changed heroine.  She was young when they first got together, easy to manage and quick to believe others, someone who learned not to trust.  Now though she’s a much stronger heroine, one to stand up for herself as she does in a memorable first meeting with Kynan.  That’s not to say that she didn’t frustrate me as well, because she did.  Her trusts issues led to a very stupid decision late in the story that put danger right in front of her.  Luckily she’s no shrinking violet as she once again stood up for herself and showed herself to be a formidable match to Kynan in a conclusion that kept me frantically turning the pages.

On a whole this was a satisfying series starter with a likable main couple whose reunion was well worth the wait.  In a romance that was hard-fought due to years of a big misunderstanding weighing on them and now due to a crazed stalker, I became quickly immersed in their pairing and the suspenseful twists and turns that befell them.  It was an exhilarating pairing teeming with sexual tension that kept me on the edge of my seat. Alongside this appealing main couple was an equally likable cast of secondary characters that has me longing for future installments featuring Saint, Cruce, and especially Bebe whose backstory is heartbreaking.  Readers will find this another nicely crafted story from the ever-reliable Ms. Bennett and will be counting down the days until we can return to this dangerous and sensual world. 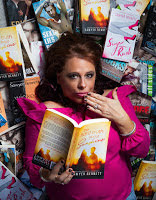