Small town romance is on vivid display in this boxed set that’s currently free.  Keep reading to get a tempting taste of the Escape to Indigo Bay collection of four romances from some of today’s favorite authors that will provide a bit of afternoon delight as readers soak up some sun.  In honor of this collection of sweet and sentimental stories make sure to fill out the form below for the chance to win a beach-themed prize pack of six print books, a tote bag, taffy, and a jar of seashells too! 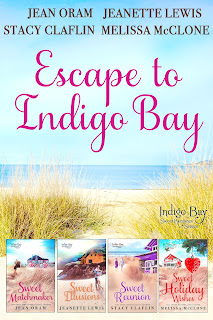 Love is always in the air when you visit Indigo Bay.
Get swept away by the magic of this beachside small town. Grab a sweet tea from Caroline's Cafe and take a stroll to the Chocolate Emporium for a quick treat. Then warm your toes in the sand and indulge in a happily ever after—or four!
From NYT bestselling author Jean Oram: Sweet Matchmaker
When Ginger says yes to a marriage of convenience to help keep Logan, the father of a special-needs child, in the country she figures it’ll also get her matchmaking grandmother off her back. But as inconvenient feelings develop for her new, handsome husband, she discovers he's also an undercover secret agent. When his mission ends, what will it mean for their marriage… and her heart?
From author Jeanette Lewis: Sweet Illusions
After escaping a cult, Eva Malone longs for the anonymity and peace of a small town. When she meets a local police officer, sparks fly. Eva keeps her past a secret, but Ben wants to know more about the mysterious woman capturing his heart. Will the secrets he uncovers lead to a happy ending or...heartbreak?
From USA Today bestselling author Stacy Claflin: Sweet Reunion
Maggie’s determined to stay single, but her meddling aunt wants her married. When, despite her intentions, Maggie falls for the notorious bad boy Canyon, Aunt Lucille doesn't think he's good enough for her, so she vows to keep them apart. Will Maggie continue to open her heart to love despite the many obstacles, or will the single life prove to be her best option?
From USA Today bestselling author Melissa McClone: Sweet Holiday Wishes.
Saving his marriage is at the top of Mitch's Christmas list. Will a romantic holiday vacation be his and Lizzy's second chance at a happily ever after or will it lead to a final goodbye?
Carve out some me-time and savor these four feel-good beach reads. The town of Indigo Bay is the perfect place to indulge in your next reading escape. Don't miss out on this limited edition collection.


from Sweet Holiday Wishes by Melissa McClone...
“You cannot kidnap Lizzy, dude. That would be a huge mistake. Not to mention illegal.”
“What are you talking about, Dare?” U.S. Army Staff Sergeant Mitchell, aka Mitch, Hamilton sat in his car across the street from an apartment building. He appreciated his team leader Sergeant Darragh O’Rourke’s early morning phone call, but the guy had it all wrong.
“I’m surprising my wife with a trip to Indigo Bay for Christmas,” Mitch explained. “That’s not kidnapping.”
“It is if she doesn’t want to go.”
“She’ll want to go.” The words, however, rang hollow.
Once upon a time, Mitch would have been certain Lizzy would say yes to a surprise getaway on the South Carolina coast. Now, not so much. He hated how the truth gnawed at him.
Rangers lead the way!
Mitch hoped he got the chance.
“What’s your plan B if she says no?” Dare asked.
Plan B? Mitch had spent weeks figuring out how to get his wife back after she left him in October. She’d said she needed someone to take care of her for once. He thought he was doing that already.
He dragged a hand over his tired face. “Uh…”
“This is too important. You need a backup plan.” The words flew from Dare’s mouth like artillery fire. “I had one when I wanted Jenny to give me another chance. Didn’t need it, but it was worth renting that Bigfoot costume just in case.”
Dare and Jenny Hanford, a bestselling thriller author, had become an official couple in September while Dare was recovering from serious injuries after a helicopter crash. The two hadn’t been together long, but they seemed perfect for each other.
Mitch had thought the same thing about him and Lizzy when he married her three years ago.
“I don’t need a backup plan.” He glanced at Lizzy’s empty parking space. Her overnight shift as a registered nurse had ended nearly an hour ago. Where was she? “Lizzy has wanted to go to Indigo Bay since we met. She won’t say no.”
“If you say so.” Dare’s uncertain tone matched the way Mitch felt.
“I do. My bag is in the truck. The gas tank’s full.” Mitch wanted to sound confident. His guys counted on him to lead. He needed to appear strong and capable.

And he was those things when it came to him being a Ranger.
He’d faced terrorists and insurgents while deployed with his platoon from Fort Benning. He’d been ambushed, caught in firefights, and battled for his life. But waiting for his wife was taking his nerves to an all-time high.
He missed Lizzy.
He wanted her back in their house and in their bed.
“You’ve got this.” Dare’s serious tone suggested the younger sergeant understood what was at stake. “Remember, this vacation is about Lizzy. Show her how much she means to you. Make sure she doesn’t feel taken for granted.”
Lizzy had told Mitch she’d felt like nothing more than the person who took care of the house and his sexual needs. He didn’t understand because he thought their marriage was perfect. “I’ll do whatever it takes.”
Failure wasn’t an option. 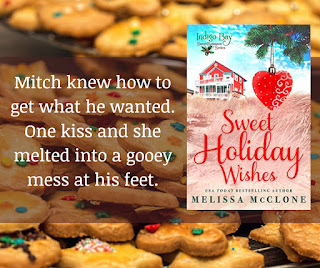 He’d escaped from impossible situations before. Reconciling with Lizzy should be easier than getting himself and his guys home in one piece. She was his family. The most important person in his life. Maybe he shouldn’t have walked out of that stupid marriage counselor’s office in June, but what else could he do when Lizzy was blaming him for nonexistent problems? He hadn’t done anything wrong.
“Have fun wooing your wife. She won’t know what hit her.” Sincerity filled Dare’s voice. “Call if you need me. I’ve got your six.”
“Right back at you. Enjoy the holidays.”
“The gifts are packed, and the engagement ring is in my pocket.” Dare sounded like he was smiling. Given he was spending the holidays in Berry Lake, Washington with Jenny and a recently adopted kitten, he was probably grinning from ear to ear. “Have a Merry Christmas.”
Mitch tucked his phone into his back pocket. The silence in the truck’s cab pressed down on him.
A marriage takes two people to succeed. I can’t keep holding everything together any longer. I want a divorce.
Remembering Lizzy’s words made his shoulders sag as if he were wearing body armor and a seventy-pound pack.
Divorce wasn’t the solution. Mitch loved Lizzy. He needed her. No one had ever loved him like she did. As soon as they arrived in Indigo Bay, he would show her their marriage was fine and they belonged together.

from Sweet Reunion by Stacy Claflin... 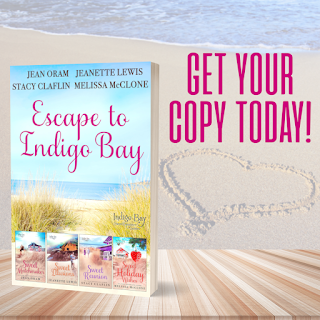 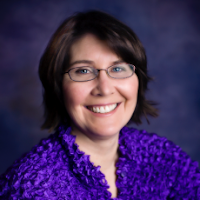 USA Today bestselling author, Melissa McClone has published over forty novels with Harlequin and Tule Publishing Group. With a degree in mechanical engineering from Stanford University, Melissa worked for a major airline where she traveled the globe and met her husband. But analyzing jet engine performance couldn't compete with her love of writing happily ever afters. Her first full-time writing endeavor was her first sale when she was pregnant with her first child! When she isn't writing, you can usually find her driving her minivan to/from her children's swim practices and other activities. Melissa lives in the Pacific Northwest with her husband, three children, two spoiled Norwegian Elkhounds, and cats who think they rule the house. They do! 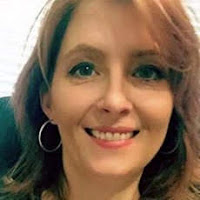 Romance with HEART!
Jeanette Lewis is a bestselling sweet romance author who specializes in writing character-driven stories with heart. Jeanette's writing is known for her strong characters, depth, and detail, as well as plenty of sweet, swoony kissing scenes.
Dreaming up stories has always been one of Jeanette's favorite things. Other favorites include family, friends, crisp Autumn days, having adventures, and frozen gummy bears. 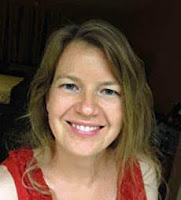 Jean Oram is a New York Times and USA Today bestselling romance author who writes feel-good small town romances. She grew up in a town of 100 (cats and dogs not included) and owns one pair of high heels which she has worn approximately three times in the past twenty years.
Jean lives in Canada with her husband, two kids, cat, dog, and the pesky deer that wander into her yard to eat her rose bushes and apple trees. She can often be found outdoors hiking up a mountain, camping or reading a book.
Thank you for reading!
NEWSLETTER  |  WEBSITE  |  FACEBOOK  |  TWITTER  |  INSTAGRAM  |  GOODREADS AUTHOR PAGE  |  BOOKBUB  |  AMAZON AUTHOR PAGE 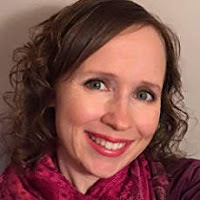 USA Today bestselling author Stacy Claflin entertains readers in a variety of genres, from paranormal to suspense to sweet contemporary romance. She has been telling stories for as long as she can remember, and as a child would often get into trouble trying to convince friends her wild tales were true. Now she puts her creativity to better use by writing page-turning books that leave readers begging for more.