It’s a second chance at romance for former high school sweethearts, both of who have been carrying lots of anger in their years apart, but who will be brought together when danger fears its ugly head.  Keep reading to get a tempting taste of When to Call a Cowboy by June Faver, then add this contemporary romance to your bookshelf.  In honor of this third installment in the Dark Horse Cowboys series make sure to fill out the form below for the chance to win 1 of 3 copies of the previous book in this series too! 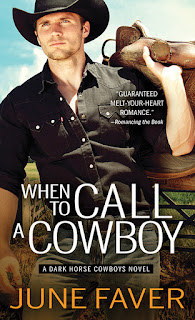 Rekindling old flames can be dangerous...
Beau Garrett may look rough around the edges, but under that exterior beats a heart of gold—a heart that was broken when his high school sweetheart disappeared days before graduation. Years have passed, but Beau's never forgotten the fiery-haired girl who left him high and dry.
Dixie Moore has her reasons for being angry with Beau. When a family emergency calls Dixie back to her hometown, she brings with her an explosive secret that could divide them for good—if the culprit behind a recent crime spree doesn't get her first. It's up to Beau to unmask this dangerous criminal...and keep Dixie out of the crosshairs.

Frowning, Big Jim Garrett stared at his youngest son. “Better get some ice on that. You’re going to have a beaut of a shiner.”
Beau slouched at the granite counter top in the Garret kitchen. “I swear, he just called my name and then came at me.”
Having raised three sons, Big Jim was used to mishaps that required ice. He kept several ice packs in the freezer just for such occasions. Selecting one, he tossed it on the wooden cutting board and pounded it with his fist to break up the chunks. “Here you go.” He flung it on the counter top near his son’s elbow.
Beau grunted and reached for the pack, placing it gingerly against his cheek. It was already swollen and turning purple.
“Nice job,” Big Jim murmured. “And you said it was Dixie Moore who punched you?”
Beau nodded. “First, her boyfriend attacked me out of the blue, and then Dixie got off a shot. What is this? Beat on Beau Garrett day?”
Big Jim snorted. “Sounds like you got in a few punches of your own.”
A wry grin spread across Beau’s face. “That I did. We Garretts aren’t exactly known for turning the other cheek.”
Big Jim exploded with laughter. “That’s for damn sure.”
“What happened to you, little bro?” Tyler, Big Jim’s middle son entered the kitchen and slid onto the stool next to Beau. “That’s quite a shiner you’ve got working there.”
“Shut up,” Beau responded.
“Remember Dixie Moore?” Big Jim asked. “She gave him that one.”
“No way!” Ty grinned at Beau. “I remember her as a scrappy little hellion. What did you do to piss her off?”
“Not a damned thing.” Beau tossed the ice pack down on the counter top and pounded it a few times with the side of his fist before gently applying it to his face again.
Tyler’s face sobered. “I heard her dad got killed last night. It’s on the news.”
Big Jim frowned. “That’s what Beau was telling me. It seems little Miss Dixie is here to bury Vern.”
Ty’s brows drew together. “I wonder what she’s going to do with the store.”
“Well, for damned sure there has to be a feed store in Langston,” Big Jim thundered. “Too many people around here depend on it.” 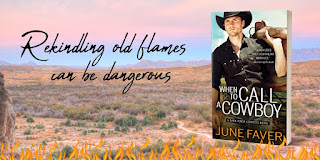 
LEARN MORE ABOUT MS. FAVER AND HER BOOKS here.