Book Tour for Anything But a Duke by Christy Carlyle (GIVEAWAY)

A man of wealth seeks to gain a place in society through marriage but soon finds himself falling for the woman trying to help him make a match in this historical romance.  Keep reading to get a tempting taste of Anything But a Duke by Christy Carlyle, then add this Victorian romance to your bookshelf.  In honor of this second installment in The Duke’s Den series make sure to fill out the form below for US readers to have the chance to win a print copy of this book, along with a print copy of the previous book in this series, too! 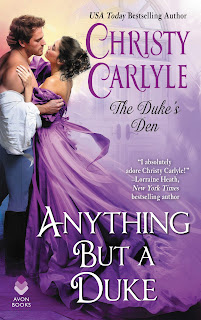 Self-made man Aidan Iverson has seen more closed doors in his thirty years than he’s ever cared to count. As a member of the elite Duke’s Den, he has all the money he could possibly need but the one thing he can’t purchase is true power. If roguish Aidan can’t buy his way into society’s hallowed halls, he’ll resort to a more extreme measure: marriage.
Brought up to be a proper lady, the only thing Diana Ashby desires is to be left alone to the creation of her own devices. But when her dreams are crushed, she must find another way to secure the future of her invention. Knowing his desire to enter her world, Diana strikes a deal to arrange Aidan’s marriage to the perfect lady—as long as that lady isn’t her. She doesn’t need any distractions from her work, particularly of the sinfully handsome variety.
As Diana and Aidan set out to find him an aristocratic match, neither are prepared for the passion that ignites between them or the love they can’t ignore.
In the Duke’s Den, can happiness ever be a winning prospect?

He was an ambitious young man. Far more so than her brother. While Dominick had been happy to return from university with nothing but memories of frivolity and mischief, Lord Egerton had taken top marks in mathematics and philosophy and won trophies in several athletic endeavors. Di knew whatever competition he entered, Lord Egerton strove to win.
He stared at her, his mouth curved in a warm smile. The expression struck her as odd. Friendliness, she expected. But there was something more in his grin.
“You’ve always been kind, Diana.”
The way he said her name, the care he took with each syllable, filled her with unease.
“I do try to be kind.”
He stepped closer, and one hand hovered between them as if he was considering whether to reach for her. “You’re also quite the prettiest girl I have ever known.”
Diana took a step back. Then another. Fear of what was to come set her heart fluttering like a bird that’s just noticed the bars of its cage.
“Samuel,” she started, desperate to forestall what he intended to say or do. But it was too late.
In one swift move, he lowered himself onto one knee and reached for her hand.
Diana froze, her muscles tightening and her tongue thickening. His touch felt heavy and yet oddly distant, as if her skin had gone numb.
“Marry me, Miss Ashby.”
Oh no. Panic sped her pulse. A single insistent hammer pounded behind her eyes. She knew what she wished to say. There was no question of her answer, but she couldn’t get the words out.
“May I take your silence as an acknowledgment of what I’ve long known?”
“I...” she forced out on a gasp.
He squeezed her fingers and inched closer, as if fearful of missing a single word.
“I regret...” The words were almost impossible to get out. Not because they weren’t true, but because panic always caused her to freeze.
But the two words sufficed.
Egerton began to crumble, the eagerness in his pale gaze turning to disappointment and then anger.
“I cannot marry you.” She shook her head to make sure he could not mistake her meaning. She had no wish to cause him embarrassment or misery, but she had no desire to marry him. Or anyone. Not yet. “My inventions—” 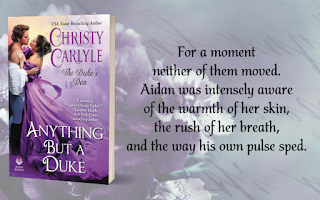 Fueled by Pacific Northwest coffee and inspired by multiple viewings of every British costume drama she can get her hands on, USA Today bestselling author CHRISTY CARLYLE writes sensual historical romance set in the Victorian era. She loves heroes who struggle against all odds and heroines who are ahead of their time. A former teacher with a degree in history, she finds there’s nothing better than being able to combine her love of the past with a die-hard belief in happy endings.