A sexy bull rider finds himself an unexpected single father in this endearing small town romance that ends with a marriage of convenience that catches both he and his bride by surprise.  Keep reading to get a tempting taste of To Tame a Wild Cowboy by Lori Wilde, then add this contemporary tale to your bookshelf.  In honor of this seventh installment in the Cupid, Texas series make sure to fill out the form below for the chance to win a set of the most recent books in this series too! 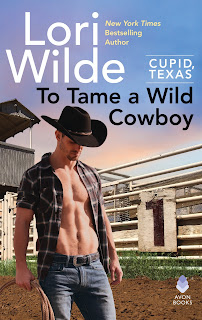 New York Times bestselling author Lori Wilde’s series set in Cupid, TX continues as one free-wheeling cowboy discovers he has a child—and a chance at real love with the last woman he expected.
What would it take to tame a wild cowboy?
One minute, Rhett Lockhart is a love ‘em and leave ‘em bull rider with a slow, sexy smile, a swagger, and not a care in the world. The next, he learns his free-wheeling days are over: a baby has been abandoned in the hospital, and there’s no question: he’s the father. But from the first moment he gazes into his daughter’s eyes, he knows the moment has come to say ‘no’ to no-strings. It’s time to grow up.
Standing in his way is the baby’s foster mother, Tara Alzate, who doesn’t quite believe Rhett is ready to change his ways. Still, she’s not not immune to his considerable charms. So when he proposes a marriage of convenience and shared custody, against her better judgement, she says “I do.” Can Tara tame this wild cowboy and make her own, long-buried dreams come true?

“Rhett, you may now kiss your bride.” Here it was. The moment Tara had been dreading since she’d cooked up this farcical idea. She’d made him promise to dole out nothing by a mere hint of a kiss, the barest brushing, the smallest increment of lip touching that they could get away with. He’d promised. She trusted him. He leaned in. She braced herself, locking her knees. Hang on. It’ll be over in an instant. His head dipped. She tipped her chin up. Rhett’s mouth came down on hers and for a second, he was playing by the rules and she sighed with relief, and thought, wow, this is nice...But the thought was premature. Her lips parted involuntarily, and she closed her eyes and sank against him. Well and completely lost. A fifth generation Texan, LORI WILDE is the New York Times and USA Today bestselling author of 82 works of fiction. She’s a three-time nominee of the Romance Writers of America prestigious RITA award and has won numerous other awards. She holds a bachelor’s degree in nursing from Texas Christian University, and a certificate in forensics.
She is also a certified Hatha yoga instructor, and runs a yoga/creativity retreat for artists at Epiphany Orchards in Weatherford, Texas, the Cutting Horse Capital of the World.