Today’s the day as fans of MC romances get to read this story of redemption and fatherly love set amidst a backdrop of revenge and preconceived notions.  Keep reading to get a tempting taste of Breaking the Chains by Janine Infante Bosco, along with my impressions of this second installment in the Satan’s Knights Prospect Trilogy, then add it to your bookshelf! 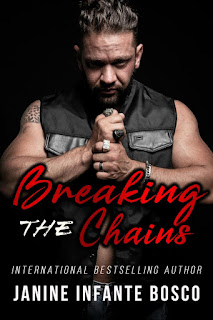 One way or another, all men pay for their crimes. Some do their time locked in a cage, while others meet their due karma without a judge or a jury. My debt to society is almost paid, and soon I'll be free to get my son the justice he deserves. Justice he wouldn't be due if only I had done my job as his father and protected him.
There's just one hitch, and her name is Charlotte.
The gorgeous and completely inexperienced paralegal's mission seems to be making me a law-abiding citizen and not a vengeful son of a bitch. But underneath her prim and proper facade, there is a woman begging to be unleashed. If I wasn't so hellbent on breaking the chains of pain bound to my boy, I'd be tempted to unravel Charlotte and show her what it's like to ditch the law and walk on the wild side. And there's no time for me to succumb to her efforts to make me a decent man. I've agreed to prospect for the Satan's Knights MC, and my pretty little paralegal is about to learn there ain't nothing noble about a man who sells his soul to the Devil in the name of revenge. 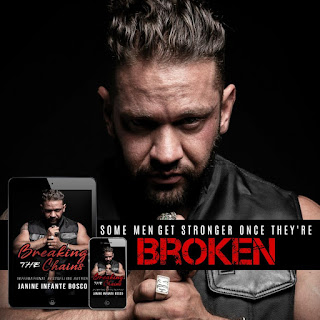 When it comes to the MC world no one depicts it in a more realistic way than Janine Infante Bosco.  The moment the Satan’s Knights were introduced to readers was the moment I was hooked and it’s been an exhilarating and emotionally engaging ride ever since.  With this new trilogy a new group of men are making a place for themselves within the club as the club itself starts to forge a new path that I look forward to seeing more of.

Gabriel Bishop is not a good man, and he knows it, as he constantly beats himself up over his past.  The only good thing he’s done is to father a sweet-natured young boy named Connor, a young boy who needs him now more than ever after it’s discovered that his uncle has been sexually abusing him.  While his son was growing up Bishop was only interested in drugs and whatever deeds helped him get those drugs, but with the death of his ex he’s finally stepped up to become a real father.  It’s a difficult journey though as his past hangs over his future and as his current incarceration makes it hard to prove he’s worthy of getting custody of his son.  Helping him in his journey is the Satan’s Knights as they provide a feeling of safety to his son and give Bishop the means to live a clean life.  With lawyer extraordinaire David Schwartz also on his side things start to look up, but it’s his paralegal Charlotte that really changes Bishop’s life.  He’s immediately attracted to her and though he doesn’t think he’s worthy of her he’ll do all he can to claim her as the more they interact the more he can’t picture a life without her.  Bishop’s a compelling hero, one who’s far from perfect, but who’s trying to be what others need him to be.  He’s a man weighted down by guilt, a man who showed his emotions and made me cry right along with him.  There’s a sensual side to him too, one that has him constantly trying to make Charlotte blush through dirty talk and subtle touches.  It’s a slow burn between the two of them, a super slow journey that doesn’t combust until near the end, but it was definitely worth the wait as my tablet nearly singed my fingertips from their erotically-charged interlude.  It was a journey that kept me on edge hoping Bishop would stay on the right path as I rooted for him to get his HEA.

Charlotte’s past weighs on her as well and it led to lots of tears throughout this story as she carries lots of guilt over her feelings regarding her father, feelings that came from a child’s viewpoint.  Her own father was incarcerated, and died while in prison, which fuels her desire to help others in the same situation.  Add in the death of her sister due to a heart condition and you start to understand why Charlotte feels so guilty over the past.  Throughout the story Charlotte’s an immensely appealing heroine with a kind heart and I can easily see us as friends.  When readers first meet her she’s a bit insecure, desperate to do right by Bishop.  She’s a bit naive too, thrown off by Bishop’s overt flirtations, but the more they interact the more self-assured she becomes.  She becomes more invested in his life, putting her heart on the line when providing a new home for Connor.  Though she knows she shouldn’t fall for Bishop she can’t stop what her heart wants and it’s a journey that pulled at my heartstrings as she and Bishop fought for their HEA.

This book’s a bit different from previous Satan’s Knights stories as readers are taken on a back and forth journey with scenes that take place in the past as well as the present.  The transitions between these scenes are a bit rough and made for less than smooth storytelling. When it came to the romance between these two so much of their time was spent apart.  It was frustrating at times to see their romance move at such a glacial pace, but at least the wait was worthwhile in a super sizzling encounter.  Before that readers got phone calls teeming with sexual tension along with small touches that made me want to scream in frustration.  Along with this likable main couple readers got to meet Connor, a sweet young boy who just wants to feel safe and be with his dad.  I ached for all he’d been through and cheered for all those who came to support him.  I liked learning about BACA (Bikers Against Child Abuse) and their role was seamlessly incorporated into the story and I hope to learn more about them in future books.  I also hope to learn more about Schwartz, the high class and cutthroat lawyer of the Satan’s Knights. He’s always seemed mysterious and standoffish, but here we got to see a more heartfelt side to him.  His attraction to Charlotte’s cousin Gabriela was also touched on and I look forward to seeing where things go for these two very different characters as they’re already butting heads.  By the turn of the final page I was once again worn out by all the intense emotions but heart warmed that more people became “Property of Parrish” as it’s a family that’s always there for you.