Book Tour for To Bed the Bride by Karen Ranney (GIVEAWAY)

An instant attraction leads to a clandestine connection for a woman whose future looks lonely amongst an extended family and fiancée who wants to control her.  Keep reading to get a tempting taste of To Bed the Bride by Karen Ranney, then add it to your bookshelf.  In honor of this third installment in the All For Love series make sure to fill out the form below for US readers to have the chance to win 1 of 3 print copies of this book too! 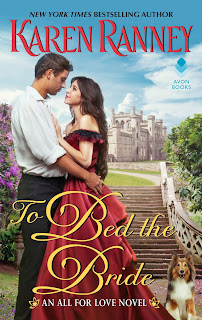 Politics has introduced MP Logan McKnight to many fascinating people, but the lady he encounters on the lands bordering his ancestral Scottish home outshines them all. Eleanor Craig of Hearthmere seats a Thoroughbred like a queen, knows as much about world events as any of his colleagues—and is engaged to one of the worst men Logan knows. She also seems lonely, so Logan brings her a friend. Thus should their acquaintance end, yet it’s only just begun.
The puppy Logan delivers is every bit as irresistible as the man himself. How could this stranger sense the isolation Eleanor suffers among her scheming, snobbish extended family and fiancé who control her life? It’s even worse in London—until she begins meeting Logan secretly in a secluded park. Their passionate connection frees Eleanor, body and soul. But discovery threatens disgrace—or worse.

Nothing mattered but looking into Logan’s eyes...
...keeping his gaze as he placed his other arm around her, fully embracing her.
She didn’t say a word of protest as he bent his head. Nor did she move away when he kissed her, his arms pulling her even closer. For a matter of seconds, perhaps minutes, she lost her sense of self, the apartness she’d felt for years.
Her hands grabbed his jacket, holding on as her knees nearly buckled. Her heartbeat escalated; her breathing grew tight. Blood heated and pounded as her skin warmed. She wanted to be closer, for this feeling to continue, to never end. He was no longer a stranger or quite a friend. Instead, he was more than that. 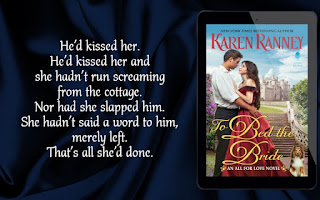 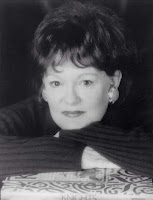 KAREN RANNEY began writing when she was five. Her first published work was The Maple Leaf, read over the school intercom when she was in the first grade. In addition to wanting to be a violinist (her parents had a special violin crafted for her when she was seven), she wanted to be a lawyer, a teacher, and most of all, a writer. Though the violin was discarded early, she still admits to a fascination with the law, and she volunteers as a teacher whenever needed. Writing, however, has remained an overwhelming love of her life.

a Rafflecopter giveaway
at December 08, 2019