A man longing for days past finds himself attracted to a woman looking towards the future in this sensual western romance.  Keep reading to get a tempting taste of Pathfinder by Anna Schmidt, then start counting down the days until this book releases on December 31st.  In honor of this third installment in the Cowboys & Harvey Girls series make sure to fill out the form below for the chance to win 1 of 3 sets of the first two books in this series too! 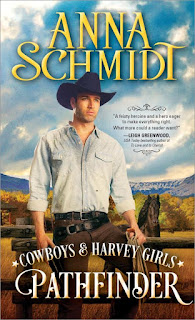 Return to a time when the West was Wild...
Captain Max Winslow was once a pathfinder for the Army, blazing trails and keeping his brothers-in-arms safe. Now he’s the star of a Wild West show, reminding curious audiences of days long gone. The world around him may be changing, but that doesn’t mean he has to accept it—not when there are frontiers yet to be explored.
When Max first sets eyes on no-nonsense Harvey Girl Emma Elliot, he knows that anything between them would be impossible. She’s a realist embracing what the future holds, while he’s a dreamer, determined to preserve the West he once knew. And yet something about Emma’s strength of will calls to him. It isn’t long before Max must decide: is there room in his dream for love, or will his resolve to hang on to the past jeopardize their future?

Award-winning author ANNA SCHMIDT delights in creating stories where her characters must wrestle with the challenges of their times. Critics have consistently praised Schmidt for the reality of her characters—exposing their flaws as well as their strengths as she delivers strong tales of hope and love in the face of seemingly insurmountable obstacles. She resides in Wisconsin and Florida.

a Rafflecopter giveaway
at December 26, 2019