Young loves are given a second chance in this small town romance dealing with family and emotions from the past.  Keep reading to get a tempting taste of The Way Back to You by Sharon Sala, then add it to your bookshelf when it releases on December 31st.  In honor of this ninth installment in the Blessings, Georgia series make sure to fill out the form below for the chance to win 1 of 3 copies of the previous book in this series too! 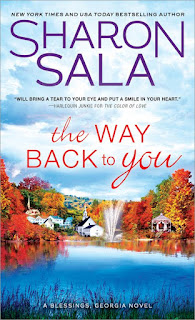 What do you do when your whole life is turned upside down?
Sully Raines sets out to find his birth mother, and ends up in Blessings, Georgia. A new surprise awaits him here, but of the best kind—his childhood sweetheart, whom he hasn’t seen since she moved away when they were teens, is living in Blessings now. He’s not sure she’s as happy to see him as he is to see her, but it’s been a lot of years, and a lot of water under the bridge.
Sully’s heartfelt search for answers about his past might just turn out to be the key to his future...

SHARON SALA has over one hundred books in print and has published in five different genres. She is an eight-time RITA finalist, five-time Career Achievement winner from RT Book Reviews, and five-time winner of the National Reader’s Choice Award. She lives in Norman, Oklahoma.

a Rafflecopter giveaway
at December 29, 2019