Fans of rockstar romances will want to add this author to their must-read list because of this gritty tale set in the music world teeming with sexual tension.  Keep reading to get a tempting taste of Brooklyn & Beale by Olivia Evans, along with getting my impressions of it, then add this engaging tale to your bookshelf! 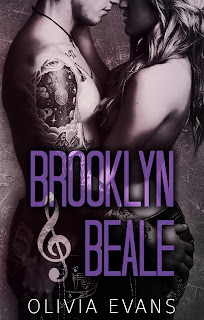 The life of a session musician is rarely easy. After consecutive tour cancellations and a stack of unpaid bills, Chloe Bennett fears her dream has come to an end.
Then everything changes.
Indie rocker Reid Ryder needs a replacement violinist for his tour. For Chloe, it’s the opportunity of a lifetime. For Reid, it’s a checkmark off his list. Already battling addiction, guilt, and his inability to write new music, Reid's hopeful that things are finally falling into place.
But life is never predictable.
When the tour begins, he finds himself drawn to Chloe. She challenges and inspires him. Their onstage chemistry is electric. To the outside world, they’re the perfect match. To those involved, however, it’s not so simple. When Reid’s no longer sure that the future he planned is the one he wants, a choice must be made.
Love...or loyalty. 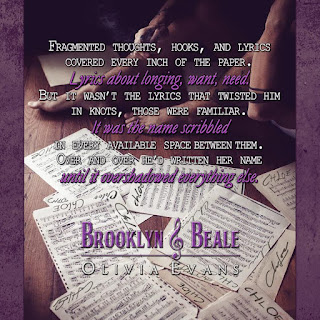 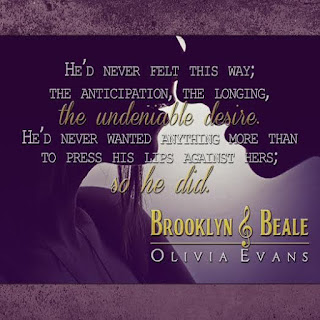 Not having read Ms. Evans before I didn’t know what to expect with this rock star romance, but what I got was a deeply emotional tale of finding your place in the world and the second chances for HEA you find along the way.  With a compelling main couple, and a vivid depiction of the gritty and sensual world of being on the road, readers will find themselves captivated by this rollercoaster ride of emotions.

Reid Ryder is at the top of the music charts but it was a rocky ride to get there, a ride that led to drug abuse and moments of writer’s block. Over the years he’s made plenty of bad choices, but in an attempt to get clean he returned to the one woman always there for him.  He and Jess may come from different worlds, as she’s a bit country and he’s a lot rock ‘n roll, but he counts on her support.  The moment he meets Chloe though is the moment his life changes irrevocably.  Bringing her on tour gives him another support system as they evolve from friends to lovers in a slow burn teeming with sexual tension.  Throughout this story I was drawn to Reid and his sexy rock star facade that hides a softer side that warmed my heart.  His past is one that still weighs on him, a past dealing with addiction along with other heartbreaking moments that’s slowly revealed as Reid and Chloe spend time together. It’s a slow-burn between these two, a journey that I inhaled every step of the way before reaching a truly HEA.

Chloe Bennett’s in dire need of a music gig with her bills piling up and with wanting to prove something to her mother.  An opportunity of a lifetime lands in her lap when she needs it most though and by auditioning for Reid Ryder her life will never be the same.  Chloe’s giddy during her audition and from there the two of them have a crackling connection that had them dancing around each other, but because of Jess they try to stay in the friend-zone.  With each mile traveled though it’s clear that it’s only a matter of time before they give in to their obvious attraction and I was on the edge of my seat waiting for that to happen. Throughout their time together readers got a heartfelt glimpse into Reid’s past with Chloe supporting him by saying it like it is.  When it came to romantic feelings she didn’t hold back either, staying a friend until the Jess situation gets settled.  Chloe’s a very likable heroine, honest with an intriguing look that showed off her wild side with purple hair and piercings, alongside her violin playing expertise.  She quickly finds a place for herself with Reid’s bandmates taking on a familial vibe and I enjoyed their playful behavior on the road.  From the first page to the last I was rooting for Chloe and Reid as their angsty journey saw them making beautiful music together as I waited with bated breath for them to finally give in to their attraction.

The rock star world is on glittery display in Ms. Evans’ book, warts and all as my heart pounded each time this duo hit the stage.  While their growing closeness played out backstage so too did it play out on stage in a sensual dance that everyone around them took note of.  This vivid depiction further immersed me in this tale and left me on edge in a sometimes frustratingly slow journey to HEA.  Another roadblock between these friends to lovers is Jess (a facet of the story that some readers might have a big problem with).  She’s a good support to Reid when he needed it most but they are two very different people with futures that are going in opposite directions.  Though Jess is in the background for most of the story Reid stayed true to her, at least in his deeds, which is why I didn’t consider him a cheater.  It was clear too that their time together was nearing an end as he worked through his demons to find a future of his own making with Chloe by his side.  On a whole I found this a satisfying read with characters I could see myself hanging out with. I appreciated their truthfulness, even when there was hurt involved, and found myself captivated by their journey to HEA.  I would love to revisit the rock star world as Ms. Evans was a talented guide who has plenty of stories left to tell.

*I got this book from the author for review in exchange for my honest opinion.
at December 11, 2019