Sparks fly when a single mom and a modern-day cowboy work to keep a therapeutic ranch open despite the odds and while their instant attraction seems to be getting in the way.  Keep reading to get a tempting taste of A Cowboy Never Quits by Cindi Madsen, then add this  to your bookshelf when it releases of December 31st.  In honor of this first installment in the Turn Around Ranch series make sure to fill out the form below for the chance to win 1 of 3 copies of this book too! 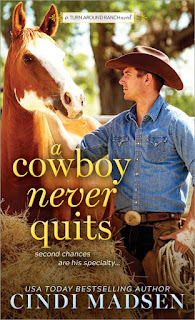 These hardworking cowboys give everyone a second chance...
When single mom Jessica Cook is at the end of her rope, she takes her 16-year- old daughter to Turn Around Ranch. The ranch has a great reputation for teen therapy, and Jessica prays there’s room there for her and Chloe.
Wade Dawson’s first priority is to keep the ranch afloat to help teens and their families. But he can’t seem to keep his boundaries when it comes to Jessica—she’s talked her way into a job on the ranch so she can stay near her
daughter and her tenacity and courage are truly impressive. Not to mention she’s a natural beauty and sparks fly whenever he’s in her vicinity.
But as one crisis after another befalls the ranch, Wade is going to have to decide whether he can afford to let a woman get under his skin...

Cindi Madsen is a USA Today Bestselling author of contemporary romance and young adult novels. She sits at her computer every chance she gets, plotting, revising, and falling in love with her characters. Sometimes it makes her a crazy person. Without it, she’d be even crazier. She has way too many shoes, but can always find a reason to buy a new pretty pair, especially if they’re sparkly, colorful, or super tall. She loves music, dancing, and wishes summer lasted all year long. She lives in Colorado (where summer is most definitely NOT all year long) with her husband and three children.

a Rafflecopter giveaway
at December 28, 2019