Book Tour for Claimed By Nicolai ​by Denna Holm (GIVEAWAY)

It’s a rollercoaster ride of action and romance as a human female ends up being kidnapped by an alien wanting to procreate in this sci-fi tale.  Keep reading to get a tempting taste of Claimed By Nicolai by Denna Holm, then add this exhilarating story to your bookshelf! In honor of this first installment in the Raiden Warriors series make sure to fill out the form below for US readers to have the chance to win a signed print copy of this book too! 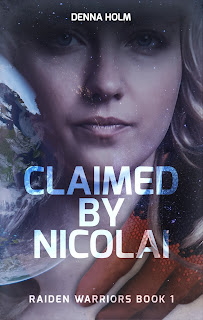 When Abby Harris takes her faithful German shepherd out for a hike in Oregon's beautiful mountains, getting abducted by aliens isn't even a blip on her radar. Her trusty can of bear spray and pocket knife aren't much help against the seven-foot monsters who swoop in out of nowhere to transport her to a ship in space.
Nicolai Nekbet is Crown Prince for the House of Nekbet on the planet Raiden. Unable to bear healthy children with females of their own species, Raiden warriors must hunt for a bride outside their own world. Nicolai has his heart set on a human even though their planet is protected by an ancient species called Laizahlian. When he sees the tall blonde-haired beauty out in the mountains with only a dog by her side, he knows he must have her.
With Abby safely on his ship, Nicolai injects her with his shaprata, his essence. His shaprata will change her on a cellular level, making them compatible for procreation, but he must still work hard to win her heart. If she rejects their union, it could easily mean his death. 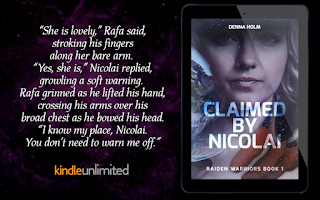 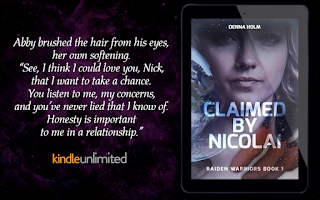 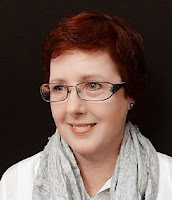 A retired FEI competitor in dressage, she earned her United States Dressage Federation Bronze and Silver Medals. After Denna retired from training and showing horses, she decided to try her hand at writing novels in paranormal and science fiction romance. She used the unique personalities of her many wonderful students to help bring life to her characters.
Denna and her husband Lee make their home in the beautiful State of Oregon with their two loyal German shepherds, one energetic border collie, and two very spoiled cats. Animals are given a special place in her novels, their offer of unconditional love a lifeline in this difficult world. Denna and Lee enjoy spending time camping and fishing with their children and grandchildren.

a Rafflecopter giveaway
at December 21, 2019