Fans of western historical romances will be drawn to this exhilarating tale of revenge as a man determined to avenge himself finds a new purpose when the woman who saved him needs his protection.  Keep reading to get a tempting taste of Ride the High Lonesome by Rosanne Bittner, then add it to your bookshelf. In honor of this first installment in The Outlaw Trail series make sure to fill out the form below for the chance to win 1 of 3 copies of this book too! 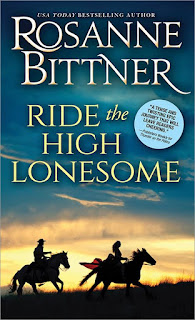 A man bent on revenge.
A woman determined to survive.
A land that knows no mercy.
Meet the Men of the Outlaw Trail
When Kate Winters is left stranded and defenseless in outlaw country, she knows there’s little chance she’ll make it out alive…until she stumbles across a ruthless gang hanging a cowboy for his cattle. She waits until the outlaws are gone, desperate enough to claim the dead man’s horse to make her escape—only to realize he’s not dead after all.
Those outlaws should have made damn sure Luke Bowden was good and gone. Now he vows he’ll have his revenge no matter the cost. But they’re miles away from the nearest town, and the woman who saved his hide won’t survive the ride back. He owes her his life—he owes her everything—and it doesn’t take long before he’s faced with a terrible choice: stand by Kate…or claim his revenge?
EXCERPT:

A native of Michigan, USA Today bestseller and award-winning novelist ROSANNE BITTNER is known as the “Queen of Western Historical Romance” for her epic love stories and family sagas. Her award-winning, well-researched books span 1800’s America from coast to coast.  The descriptive words used most often by Rosanne’s devoted readers are “awesome,” “realistic,” and “unforgettable!” Rosanne and her husband live in southwest Michigan.
Discover more about Ms. Bittner, and her books, by visiting her website HERE.

a Rafflecopter giveaway
at December 02, 2019