Book Excerpt Blitz for Falling into You by A.L. Jackson (GIVEAWAY).... 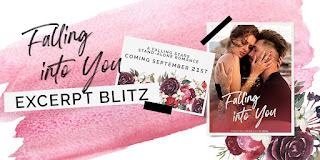 Readers will find this an intense story of painful choices and second chances set in the rockstar world as young lovers find their attraction reigniting when a sexy rocker makes a trip back home.  Keep reading to get a tempting glimpse of Falling Into You by A.L. Jackson, then start counting down the days until this book hits shelves on September 21st.  In honor of this third installment in the Falling Stars series make sure to fill out the form below for the chance to win 2 signed print books from this series, a decorative water bottle, and tote bag too! 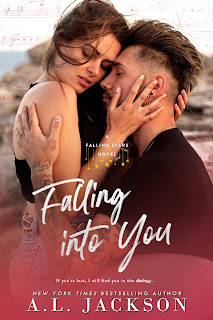 Richard Ramsey is the guitarist for the world’s hottest new band.
Gifted. Charismatic. Hot as sin.
Lend your ear, and he’ll steal your heart.
Nah, you can’t have his considering he left it in his hometown years ago.
He knows better than going back. But it’s his younger sister’s wedding, and there’s no way he can say no to that.
He should have known she would be there, invading his senses and making him thirst and hunger for what he wants most.
Violet Marin hates him for what he’s done. He left her empty handed with their wreckage strewn all around. She’s picked up the pieces and is living her life the best way that she can.
But their connection is fierce.
Their attraction unending.
It only takes one glance for their worlds to collide. One touch to set them on fire.
But she doesn’t know the dark secrets he keeps. If he had understood the true price of fame, he would have known he’d sold his soul and this debt is something he cannot repay.
Letting her go is impossible, but will loving her cost it all?

I stepped deeper into the dancing shadows at the base of the stairs. I knew when he felt me.
When his spine stiffened and his stony jaw clenched.
He slowly pushed to his full, towering height.
The man a dark avenger.
“Violet.” My name rumbled through the air like rolling thunder. “What are you doing down here?"
Fear tumbled through my belly when I saw the lust flare in his eyes.
The greed and possession that curled his hands into fists.
But I would no longer live my life running from what I wanted most.
I could live in fear of what was to come, or I could live my life to its fullest, and I knew I wanted to live like a flower beneath the sun in full bloom.
I lifted my chin when I released the words, “I just need to know one thing right now, Richard Ramsey. Tell me it’s true. Tell me you still love me because I’m done pretending like I don’t need you."
Maybe I shouldn’t have given him that trust.
Maybe I shouldn’t have given him the chance to lie.
Maybe I should have known I would regret it all over again when I saw the guilt flash across his stunning face.
But I was finished running.
So, I stepped off the cliff I’d been teetering on for the last six years, straight into a free fall, and prayed he’d be there to catch me at the end... 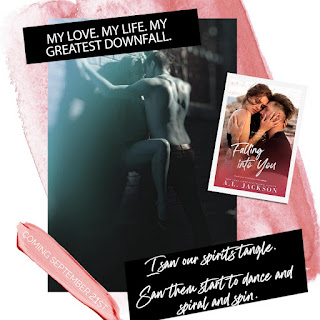 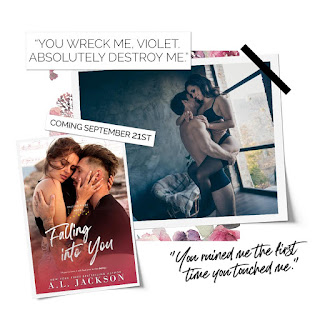 VOTE FOR FALLING INTO YOU AS THE MOST ANTICIPATED BOOK here. 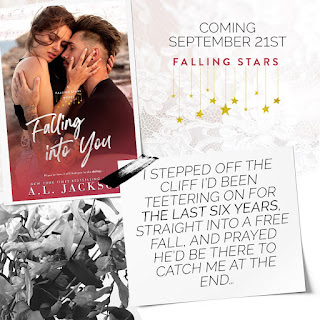 A.L. Jackson is the New York Times & USA Today Bestselling author of contemporary romance. She writes emotional, sexy, heart-filled stories about boys who usually like to be a little bit bad.
Her bestselling series include THE REGRET SERIES, CLOSER TO YOU, BLEEDING STARS, FIGHT FOR ME, CONFESSIONS OF THE HEART, and FALLING STARS novels. Watch out for her upcoming stand-alone, FALLING INTO YOU, releasing September 21st.
If she’s not writing, you can find her hanging out by the pool with her family, sipping cocktails with her friends, or of course with her nose buried in a book.
Be sure not to miss new releases and sales from A.L. Jackson - Sign up to receive her newsletter HERE or text “aljackson” to 33222 to receive short but sweet updates on all the important news.

a Rafflecopter giveaway
at September 03, 2020