Book Spotlight on Here for You by Pat Simmons (GIVEAWAY).....

Fans of inspirational romances will be drawn to this tale of sacrifice and love as end of life issues are balanced with a loved one's crisis of faith in an emotionally powerful romance.  Keep reading to get a tempting taste of Here for You by Pat Simmons, then add it to your bookshelf.  In honor of this second installment in the Family Is Forever series make sure to fill out the form below for the chance to win 1 of 5 copies of the first book in this series too! 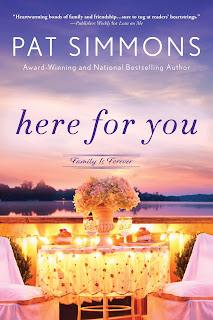