Book Blast for All the Missing Pieces by Julianna Keyes (GIVEAWAY).....

A woman hiding from the disaster her life has become has a one night stand that will change her life forever in this exhilarating rollercoaster ride full of twists and turns.  Keep reading to get a tempting taste of All the Missing Pieces by Julianna Keyes, then discover even more about this book by visiting the other sites hosting this tour.  In honor of this standalone story full of suspense make sure to fill out the form below for US/CAN readers to have the chance to win a $25 Amazon GC too! 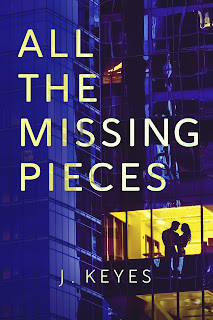 Reese Carlisle hates her life. Three years after her father’s arrest for one of the largest embezzlement schemes in history, twenty million dollars is still missing, and the world believes she knows where it is.
Two years after her brother’s death, they still think she killed him. One year later, she’s still hiding.
When the loneliness is too much, she seeks out strangers for one dark night, no questions asked. She makes up a name, puts on a disguise, and tries to forget.
One night she meets a new man. She tells him her name is Denise, she’s a dental assistant, and she loves dogs. He tells her she’s smart, she’s pretty, she’s funny. Things she hasn’t heard in too long.
Things that are too good to be true...

I undo my seatbelt and shove open the car door. Maybe it’s the cool air or the terror still pumping through my veins, but my exposed skin pebbles with goose bumps. I round the car but I’m still half-blind; the truck is right where he stopped, emerging from the invisible lane and pointed straight at me, the glaring light making it impossible to see. The silhouette of a figure starts to approach. It’s like a scene from every alien abduction movie, and I’m the newest test subject.
“Do I know you?” he asks.
I freeze. It’s that precipitous moment where I can climb into my car and drive away, or turn back and have this conversation. Yes, I’m Reese Carlisle. Yes, I was at the prison visiting my criminal father. No, I don’t know where the money is. No, I didn’t kill my brother.
“Who do you think I am?"
He takes a few steps toward me and my muscles tense, preparing to run. Right. Like I’m going to lead him on a chase through a corn field. I stopped running years ago.
“Denise,” he says.
The world stops spinning.
Only Doug knows Denise. And I can’t think of a single sane reason Doug would be parked along a dark country road on a Saturday night, accidentally scaring the crap out of me.
Except...he doesn’t sound like Doug.
He comes closer and I shift away, moving the glare of the headlights from my front and his back to right in between, and I see who it is.
The stranger.

Julianna Keyes is a Canadian writer who has lived on both coasts and several places in between. She’s been skydiving, bungee jumping and white water rafting, but nothing thrills—or terrifies—her as much as the blank page. She loves Chinese food, foreign languages, baseball and television, though not necessarily in that order, and writes sizzling stories with strong characters, plenty of conflict, and lots of making up.

a Rafflecopter giveaway
at September 18, 2020