Book Tour for The Ice in Our Hearts by BC Powell (Review & GIVEAWAY).....

The Winter Olympics take center stage in this tale of opposites attracting as two young people struggling with issues of their own discover a connection that will change their lives irrevocably as they compete to be the best.  Keep reading to get a tempting taste of The Ice in Our Hearts by BC Powell, along with getting my impressions of it, then discover even more about this book by visiting the other sites hosting this tour.  In honor of this standalone YA romance make sure to fill out the form below for the chance to win a $50 Amazon GC too! 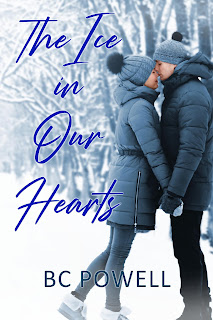 Bryce is a snowboarding sensation, a cocky teenager from California with a giant chip on his shoulder called Type 1 diabetes. He competes because he has something to prove.
Daria is a rising star in figure skating, a withdrawn teen from Russia with a tragic past. She competes to provide her family with a better life.
Primed to overthrow archrivals who dominate their sports, they’re both headed to the Winter Olympics. But soon after arriving at the Games, a flurry of ill-timed setbacks threatens to shatter their dreams.
When two teens from halfway around the world meet, they discover an unlikely but undeniable connection. As they gear up for their final shots at medals, they help each other realize the greatest barrier to the top of the podium might be hiding inside their minds.
Take a breathtaking ride with Bryce and Daria as they find true understanding, try to overcome the bitterness of their pasts, and share a romance more meaningful than winning gold.
FIND AT GOODREADS here.
BUY AT AMAZON here.
MY IMPRESSIONS OF THIS BOOK:
The glitz, glamour, and surprises of the Winter Olympics were on vivid display in this YA romance that brings together two teens from opposite sides of the world as they strive to be the best in their field while dealing with their own personal issues.  The two find an unexpected connection that gives them support when they need it most while opening up their hearts to a future they never thought possible in a story that pulled at my heartstrings.
From the moment readers start this book they'll find themselves quickly immersed in the competitive sports worlds of snowboarding (courtesy of 17 year old Bryce) and ice skating (courtesy of 16 year old Daria) through vividly depicted scenes that were an encyclopedia of knowledge that put me in the middle of the action.  Incredible moves, poetic poses, and indisputable athleticism wrapped me up in all the thrills and chills of these sports and I applaud the author for making me feel like a part of the action.  While I appreciate learning all there is to know about these sports there were times where it did feel a bit overwhelming and it was a distraction from the sweet and supportive relationship brewing between these two teens.  While I'm not normally a fan of YA stories, I must say that I thoroughly enjoyed Bryce and Daria.  They were young in years, but in words and deeds they were wise beyond those years as much of their lives were spent practicing and competing which leaves little time for fun.  These two understand the sacrifices and the daily pain, both physically and mentally, that sports take on them and it's what binds them together early on.  Making circumstances for them even more difficult is their having to deal with medical issues, issues that have them feeling alone and a bit resentful too.  For California boy Bryce, who has Type 1 diabetes, it's a daily regimen of tests and eating healthy while coping with the stresses of practice in an ongoing loop that has him wishing he could be like other teen boys. Russian ice skater Daria is carrying the hopes of her family on her shoulders while dealing with the loss of a loved one.  She too has a medical condition she's dealing with, hyperhidrosis, that causes profuse sweating that's both embarrassing and causing open sores on her feet.  These are heavy issues these two teens are having to deal with and I was glad they could lean on each other.  Together they found unconditional support, a chance to open up without fear of letting others down, and it was a natural progression to see their hearts soon become involved.  It's a sweet romance behind the bright lights of sports, one full of promise that grabbed my heart and didn't let go.  Who knew that traveling halfway around the world would introduce you to the other half of your heart...but that's exactly what Bryce and Daria found.
On a whole this was a sweet and heartwarming romance set in the world of sports, one that vividly depicted the intricate moves of ice skating and snowboarding to immerse you in all the ins and outs.  Bryce and Daria were immensely likable, easy to relate to as they struggled with personal and professional issues that the author never sugarcoated. Their struggles had me aching for them as it caused them to grow up way too soon, but at least they had each other to help them get through the tough times.  With each turn of the page I became more and more invested in this couple and was cheering them on, both in hopes of winning a medal and in hopes that their romance will continue.  The conclusion though leaves things a bit up in the air, but seeing how strong their connection is has left me with high hopes that their romance continues into adulthood and I'm hoping the author will revisit this couple again soon!
My rating for this is a B+
*I got this book from the author for review in exchange for my honest opinion.

AUTHOR INFO:
BC Powell is a fantasy author from Los Angeles, CA. Described as “a stunning fantasy adventure,” “incredibly original,” and “a wild ride,” his debut science fiction fantasy novel “Krymzyn” was published in October, 2014. “The Infinite Expanse”, the highly anticipated second book in “The Journals of Krymzyn” series, was released in March, 2015.
Powell has a diverse background, having held several creative positions in the entertainment industry, including an executive role at ABC-TV, but writing fiction has been his lifelong passion. “The Journals of Krymzyn” represents, in his words, “finally finding the amazing story I want to tell with characters who are able to bring the story to life."
He dual majored in journalism and philosophy at Trinity University in San Antonio, Texas. When he’s not writing, he can often be found hiking the hills of Southern California, daydreaming on the beach, or ocean kayaking. He credits his three sons, two currently in college and one in high school, as his inspiration for writing in the new adult genre.
FACEBOOK  |  INSTAGRAM  |  TWITTER  |  GOODREADS AUTHOR PAGE
**********GIVEAWAY**********
a Rafflecopter giveaway
at September 26, 2020