Two strangers find themselves in close quarters in this emotionally engaging romance between a rock star and a writer finding a connection in a world on edge.  Keep reading to get a tempting taste of Rock Star, Confined by S.M. Shade, along with my impressions of this sensual and timely romance, then be sure to add it to your bookshelf! 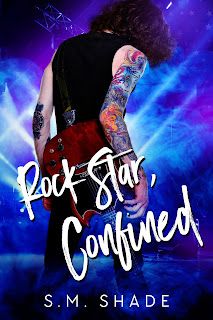 There was so much I never saw coming.
Opening for Tragic, one of the most famous bands in the world, catapulted me from mediocre anonymity into the limelight. The leap from struggling musician to successful rock star happened quickly. After my album topped the charts, I was headlining my own tour, performing for thousands of fans, and loving every moment.
Just as suddenly as my career began, it slammed to a halt, stopped by a word uttered worldwide. Pandemic.
With my tour postponed, it looked like my year wasn’t going to be a promising one, until I ended up quarantined with Geneva Rowe. Sexy, funny, and a frustrating mystery, Geneva made the days fly by.
"Sometimes the universe intervenes."
I couldn’t remember where I heard those words, but they stuck with me. Not until this year, did I believe they could be true.
Now if only it could help me convince this stubborn woman we could have more than a temporary isolation fling. 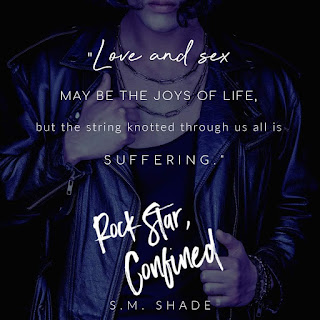 Considering that this story deals with two strangers quarantined together during the COVID 19 pandemic, I wasn't sure I even wanted to pick it up as I usually like my romances to be an escape from reality.  I'm happy I read this one though as there was surprising emotional depth, and a steamy connection, between the two very likable main characters who slowly reveal themselves to readers with each turn of the page.

Geneva Rowe clearly wants to be alone as this story started with her renting a house in the middle of nowhere for the next six months.  It's a fortuitous rental though once the COVID 19 pandemic shuts down the country and she's happy to ride things out on her own while writing her first book.  A knock at the door however changes everything for her and brings her hidden pain out into the open as she slowly makes a connection with the stranger she invites into her space.  It's a slow and steady romance that soon flourishes between her and the rock star, a romance that reveals her heartbreaking past and my admiration in her surviving it.  Geneva's a very likable heroine, one who's stronger than she gives herself credit for, and I enjoyed how natural she and Patrick's interactions felt despite his fame.  She was warm, caring, and is the kind of heroine you can see yourself being friends with which made it oh so easy to put myself in her shoes...though my time in quarantine wasn't near as romantic.

Patrick Thorn has been introduced to readers before and it was a tantalizing glimpse that was given, but here we get greater insight into him and he's definitely not your typical rock star.  From the start he could've used his fame to kick Geneva out of the rental house, but he's a good guy with a heart of gold that quickly becomes apparent as they decide to share the house.  What follows is a romance that slowly creeps up between them, one that their close quarters makes possible as they let their guards down.  Patrick is more than just a pretty face (though he's definitely sexy) and there's a depth to him that shows him to be more about the music than the image.  He cares about people and I found him most endearing during those few times where the two of them interacted with others outside their romantic bubble.  His need to help was so subtle but satisfying and was another facet to his big heart and drew me to him all the more.

On a whole this was a satisfying story with surprising depth, a deeply formed connection between the main couple that laid both of their personalities bare.  The romance between Geneva and Patrick was allowed to build naturally which made their growing connection beautiful to behold.  The issues between them weren't only related to the pandemic but to their fears...particularly Geneva's fears of her past that Patrick luckily didn't let hold him back once he committed to her.  COVID was presented in a realistic way throughout this story though, a powerful part to the storyline that added a sense of claustrophobia and concern to a story already full of intense emotions.  This made their burgeoning romance even more vital to readers and pulled me into their journey to HEA wholeheartedly.  When I started this story I wasn't sure I was ready for such a timely told tale, but it ended up being just what I needed right now to help me get through another day dealing with the chaos.

S.M. Shade is a homeschooling mom hopelessly addicted to Dr. Pepper, love stories, sunshine, and men with full sexy lips, though not necessarily in that order. A voracious reader since she sounded out her first word, she started writing as a teenager and rediscovered her love of writing as an adult. Originally from Indianapolis, S.M. now lives in a small Kentucky town with her teenage son.
She loves to hear from readers so please feel free to contact her or connect with her on Facebook or Twitter.