A man forced into coming out on his reality TV show tries to find something real when it comes to matters of the heart and finds a surprising connection to the male escort he hires and who has his own demons to deal with.  Keep reading to get a tempting taste of He Owns My Heart by Evie Drae, get my impressions of this m/m romance, then learn more about this emotionally intense tale by visiting the other sites hosting this tour.  In honor of this first installment in the Owned Heart, Body, & Soul series make sure to fill out the form below for the chance to win 2 prizes including a $50 Amazon GC, an e-copy of this book, along with a digital copy of another of Ms. Drae's books! 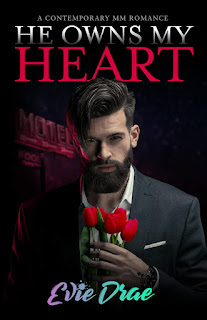 Only true love can free a captive heart.
Landon Jenks, retired four-time Golden Glove-winning shortstop for the Chicago Cubs, is lonely, heartbroken, and in desperate need of simple human contact. Trapped in the sticky fine print of an ironclad contract that forbids him from revealing his very-much-single status until the season finale of his reality show airs, he calls an elite male escort service that caters to the rich and wretched.
Accustomed to servicing his often less than savory clients at more upscale locales, twenty-six-year-old Toby Carmichael is surprised when his handler sends him to a run-down motel off I-55. But “surprise” doesn’t come close to describing the shock that rocks his system when a delightful stuttering mess covered in tattoos and nearly ten years his senior stumbles into the room—and right into his heart.
For the first time since Toby was forced into the life of prostitution, a kiss sparks a desire that has nothing to do with money and everything to do with genuine chemistry and the faintest beginnings of something so much more. But Toby’s dark past and troubled present make it impossible to see a future with Landon. And when the truth comes to light, a horrified and helpless Landon is determined to save Toby at all costs.

From the moment I started reading this book I realized it was no "Pretty Woman" as the escort featured in this story had lived a life of pain and degradation in order to save his sister and his family.  He was the sacrificial lamb in a tenuous position he couldn't escape from.  Add in an older ex baseball player who was recently outed on a reality tv show and you end up with a romance of two people emotionally bruised but looking for something real in a tale that pulls at the heartstrings while setting my tablet on fire.  Copious scenes of bdsm encounters are balanced with heartfelt moments full of quiet sharing, and wearing your heart on your sleeve, in a romance that wasn't perfect but held me captive waiting to see what hurt befell the main couple next.

Landon Jenks was a decorated baseball pitcher, the son of a politician and picture perfect mother.  His early years were all about hiding his true self, the price of not doing so was abuse, which led to cutting.  The physical scars on his arms join the emotional ones that have him doubting himself and his ability to be loved.  I ached for all he's been through, hated those who betrayed him for their own gains, and was rooting for him every step of the way to find something true.  Through it all, Landon wore his heart on his sleeve with his sensitivity set to high as he shed tears at the drop of a hat.  He merely wanted to be loved though and saw the hurt that the young man he hired for the night couldn't keep hidden, saw him as a kindred spirit and the chance to be accepted for himself in an unforgettable pairing.

At first glance Toby Carmichael seems like a carefree young man, someone who lives life without worrying about what others think.  Behind the sexy and swaggering persona though is a wounded soul who's sacrificed everything for his family...both his future and his very life.  Selling himself to settle his sister's debt has meant a life full of physical and mental abuse, a life not his own that's left him feeling dirty and unworthy of love.  The moment he meets Landon is a life altering moment for him though, one that touched my heart as two broken people found unconditional acceptance.  From that moment on he lives for every moment spent with Landon, knowing that obligations will tear them apart soon enough.  Fate soon shows that it has other plans however, bringing them together in a conclusion that's just the beginning to their rocky road to HEA.

This is a highly sexualized story, one teeming with bdsm encounters that became a bit repetitive after awhile.  The scenes where the two of them just talked were therefore a welcome distraction and revealed some very difficult issues like human trafficking, abuse, and physical harm to oneself.  These issues were handled in a respectful and thought provoking way that added weight to the overall storyline.  Along with this engaging main couple was a small cast of secondary characters, among them was Landon's delightfully flamboyant assistant Steffon who put a smile on my face whenever he was around.  He told it like it was and was a strong support to Landon when he needed help the most. Landon's ex Garrett though is completely reprehensible, someone who uses others for his own gain, and his actions late in the story were unforgivable and a bad omen for the future that was left hanging in the balance with the cliffhanger I found when I turned the final page.  Overall readers will find this an engaging read full of over the top emotions, sizzling erotic encounters, and a stereotypical villain you'll want to slug as you wait for the next installment in the Owned Heart, Body, & Soul series! 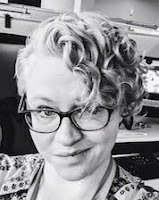 Evie Drae is a registered nurse by day and an award-winning male/male romance writer by night. She has won first place in seven Romance Writers of America® (RWA®) competitions, including the prestigious title “Best of the Best” in the 2018 Golden Opportunity Contest. She is a double finalist in the 2019 Golden Heart®, in both the Contemporary Romance and Romantic Suspense categories, and finished as a second-place runner-up in four additional RWA contests.
One of Evie’s favorite things to do is encourage her fellow writers. To that end, she started the #writeLGBTQ and #promoLGBTQ hashtags on Twitter to support and promote LGBTQ+ authors and allies while providing a safe space to connect and grow as a community. She is married to the love of her life, is the mother of three wonderful fur babies, and runs almost entirely on coffee and good vibes.
Evie loves to link up with fellow writers and readers. You can reach her directly at EvieDrae@gmail.com or find her on her social media accounts listed below. Twitter is where she’s most active but be sure to check out her blog too. She focuses on reviews for LGBTQ+ authors and allies with the occasional quirky advice/recommendation post just to toss things up.

a Rafflecopter giveaway
at September 15, 2020