Set in the world of college sports, a young man used to adoration finds himself in a steamy tug of war with a young woman who's having a hard time fighting her attraction to the renowned player.  Keep reading to get a tempting glimpse of Looking to Score by Alley Ciz, along with getting my impressions of it, then add it to your bookshelf.  In honor of this first installment in the #UofJ series visit the links below for the chance to win a $25 Amazon GC as well as a signed print book too! 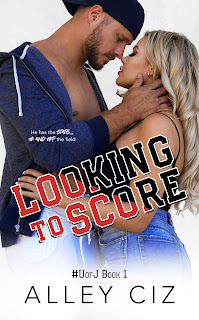 @𝗨𝗼𝗳𝗝𝟰𝟭𝟭: 𝗪𝗵𝗼’𝘀 𝘁𝗵𝗲 𝗴𝗶𝗿𝗹? #𝗖𝗮𝘀𝗮𝗻𝗼𝘃𝗮𝗪𝗮𝘁𝗰𝗵 #𝗖𝗮𝘀𝗮𝗻𝗼𝘃𝗮𝘀𝗠𝘆𝘀𝘁𝗲𝗿𝘆𝗚𝗶𝗿𝗹
𝑻𝒉𝒆𝒚 𝒄𝒂𝒍𝒍 𝒎𝒆 𝑪𝒂𝒔𝒂𝒏𝒐𝒗𝒂.
Football God. Ladies Man. Campus Celebrity. Guys want to be me and girls want to bed me. Commitment? What’s that?
Then I saw h𝑒𝑟—tiny, gorgeous and oh so...𝗠𝗜𝗡𝗘.
𝑴𝒂𝒔𝒐𝒏 𝑵𝒐𝒗𝒂 𝒊𝒔 𝒂𝒏 𝒆𝒈𝒐𝒕𝒊𝒔𝒕𝒊𝒄𝒂𝒍 𝒋𝒆𝒓𝒌.
Player. Persistent. Pain in the Pom-Pom.
I don’t care if he’s the star of the gridiron or how tight his end is.
I know his stats both on and off the field. My answer will always be 𝗡𝗢. The last thing I need in my life is another charmer who’s looking to score. 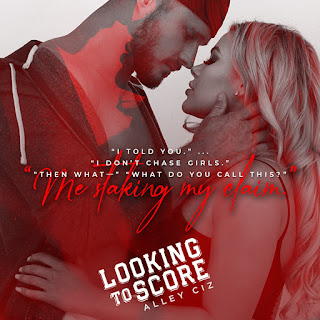 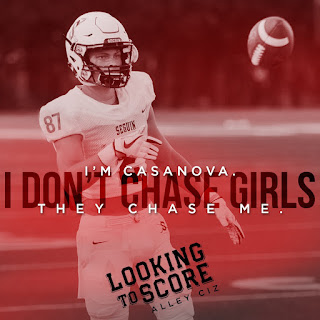 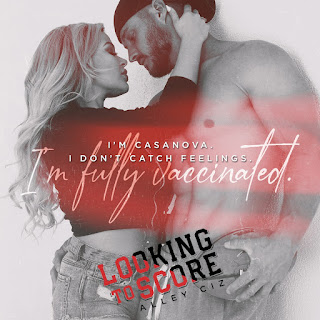 Going into this I was already expecting the ending to leave me screaming, but by the time I got there I was not only screaming but hating that I'd reached the end as I was thoroughly enjoying the ride that got me there.  From the start I was captivated by the appealing main couple with their witty and sensual banter, the shadow of mystery hanging over the heroine, and an equally entertaining cast of secondary characters that sometimes left me struggling to remember every name as I was frantically turning the pages to devour what was happening next.

Kayla Dennings was once a head cheerleader who embraced life fully, but a painful incident from the past has left her much more quiet and guarded now...especially when it comes to athletes.  It's a painful past that's slowly revealed throughout the story and it had me aching for all she went through, equally grateful for the small yet close-knit group of friends and family supporting her.  She's an immensely appealing heroine, one you can see yourself being friends with as she's genuine with a bit of quirkiness that sets her apart from the typical heroine.  All she wants is to stay out of the limelight, but the moment she catches the eye of the team's star player she'll no longer be able to keep her past in the past as she'll face an unexpected future with the sexy Mason that's just starting to unfold here.

Mason Nova lives and breathes football and is on the fast track to the NFL when readers first meet him.  From the outside he's a fun and flirty guy who loves the football groupies who throw themselves at him, but when it comes to relationships he's definitely not interested as past heartbreak has him more protective of his heart now.  The moment he sees Kayla though all his rules fly out the window in an instant and crackling connection full of push/pull early on that soon becomes something more vital to them both.  Mason is an utter delight...a player by reputation more than in reality it seemed to me.  His instant attraction to Kayla was both sweet and heartwarming as they engaged in banter teeming with sexual tension.  Mason was forced into being himself as Kayla demanded no less and I loved the vulnerability and romanticism he wasn't afraid to show despite his own painful past and his desire to win her over.

Reaching a cliffhanger is always frustrating, and it's a sign of how well Ms. Ciz crafted everything that came before, that I let out an actual scream upon turning the final page.  The wait until the next installment isn't too far away, but I'm already dreading it.  The main couple were combustible with banter that felt more like foreplay and I enjoyed being a part of their sensual dance that also had me smiling at times.  They were fun with a romance that I was cheering on every step of the way as the drama between them grew.  Surrounding this appealing and relatable main couple was an equally likable cast of secondary characters.  The names of these characters, their nicknames especially, were overwhelming early on but as the story progressed they took on more individualized traits and I started to find some favorites.  These secondary characters were a strong support to Mason and Kayla and their presence added a familial vibe to a story that I highly recommend to others looking for a romance full of heart and soul. 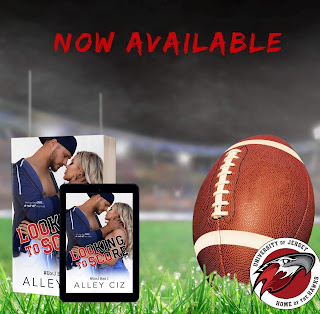 Alley Ciz is an indie author of Contemporary/New Adult, Rom-Com, Sports Romances. She's a stay at home mom to 3 amazing and crazy mini royals, a 95lb lab, and let's face it on some days her hubby is her 4th kid... But to be fair she totally loves him a lot.
When she's not corralling her crazy mini royals she can be found writing the stories the voices in her head tell her. Caffeine is a staple in her daily diet since she does most of her writing late at night when the rest of her house is asleep, usually with her trusty dog Buke (short for Beukeboom reluctantly named after a NY Ranger even though she's a NJ Devils fan all the way. Is it any surprise she writes sports romances?
Pizza and mac-n-cheese are major food groups and she is a proud Potterhead and superhero buff.
She is a complete romance junkie and can always be found reading or listening to a book.