A woman with dreams of singing finds herself struggling between attraction and fulfilling her dreams once a powerful man decides to make her his...all under the watchful eyes of an endearing cat.  Keep reading to get a tempting taste of Purr-Fect Pitch by Carolyn Wren, then discover even more about this book by visiting the other sites hosting this tour.  In honor of this charming rom-com make sure to fill out the form below for the chance to win a $20 bookstore GC too! 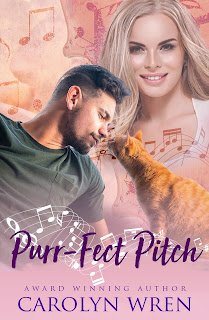 A warm-hearted, fun filled rom-com novella laden with love, music...and cats.
When his ringing doorbell wakes Devlin from a post birthday party hangover, he finds a beautiful singing telegram dressed as a kitten on the other side, who leaves him intrigued and confused in equal measures. His mysterious songstress has the voice of an angel and the devil’s own temper to match.
Katherine ‘Kat’ Grant has one dream, and that’s singing. To achieve it, she needs admission to the exclusive Perdies College of Music. Kat’s adolescent years were difficult, being dependent on the charity of others left her with a fierce independent streak and a loathing of special treatment. She’ll succeed on her own merits without anyone’s help, especially the cheeky, alluring Devlin who seems to have squeezed himself into every aspect of her life.
Devlin knows he has the power to make all of Kat’s dreams come true. But wielding that power means he could lose her forever.
Can a charismatic cat loving hero and his sassy stubborn singer find their own love song? Find out, in Purr-fect Pitch.
EXCERPT:
The moon’s pale rays were the only light in the room. They flickered around his head and shoulders in fractured shadows, given movement by the immense Jarrah trees that surrounded Perdies on all sides. With his face in profile, he was a vision of beauty, a throwback to another time in history, to when the house was young and new, and the harsh light of electricity didn’t even exist. The muscles in his back and shoulders shifted under his white shirt, echoing the movement of his hands. If she had to describe the scene in a single word, Kat would pick wow.
“Good evening, Katherine."
She jerked at his voice. “How did you know it was me?"
“I recognised you by the sweet smell of your perfume.” He continued playing as he spoke. “I’m not wearing any."
The jar of a flat note pierced the melodic wall of sound. With a grin, he swung on the stool to face her. “There goes my air of dramatic mystery. To tell you the truth, I saw you sitting in the library. You completely ignored me, so I came in here to play."
He’d been watching her read and she hadn’t even noticed? Warmth borne of a desire she wasn’t ready to admit to, started at her toes and didn’t stop until it reached her head, lingering in a couple of interesting places along the way.
“You’re playing Moonlight Sonata by moonlight. I think you’ve nailed dramatic mystery."
BUY AT AMAZON here. 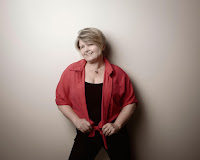 AUTHOR INFO:
After spending her working life in the finance sector, mostly in the mining industry, Carolyn began writing in 2009, just for fun. Much to her surprise, she won the very first writing contest she entered, the Australian based Emerald Award for unpublished manuscripts, and one week later received a commendation from the International Daphne Du Maurier Awards for Excellence in Mystery/Suspense. This gave her the incentive to keep writing, and to pursue a publishing deal. As at June 2020 Carolyn has 7 winners trophies and 15 finalist certificates from contests all around the world. Her books are published through Australian publishing houses, Serenity Press and Gumnut Press with future releases due with UK publishers Vulpine Press.
Carolyn likes to let her characters take control. The resulting stories range from light hearted comedic contemporary through to sexy, action packed romantic suspense and emotion driven urban fantasy. One thing remains constant in all her books, she’s a romantic at heart and loves a happy ending.
WEBSITE  |  FACEBOOK  |  TWITTER  |  INSTAGRAM
**********GIVEAWAY**********
a Rafflecopter giveaway
at September 21, 2020