Set against a backdrop of pro football, two men who've been hiding the truth about themselves find an unexpected attraction growing between them once they become friends that soon becomes something more that will put their burgeoning romance to the last.  Keep reading to get a tempting taste of Adoring Keaton by Siobhan Davis, then add this ninth installment in The Kennedy Boys series to your bookshelf! 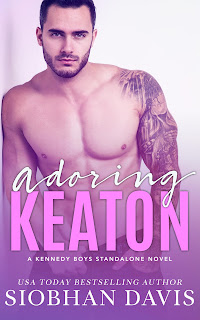 Keaton
Moving to California was supposed to be my fresh start. A clean slate. An opportunity to drop the façade, escape the lies, find a focus, and just be myself.
But I should have realized it wouldn’t be easy, especially when my last name is Kennedy.
I’m not ready to be a gay icon or some celebrity role model. I still haven’t admitted the truth to my family or the girl I professed to love, so there’s no way I want the public to know I’m into dudes.
Falling for my hot, straight, football-player roomie wasn’t part of the game plan. Neither was backing myself into a corner because I trusted the wrong guy.
Now everything is on the line, and it’s time to stop pretending.
Austen
From the time I was a little kid, all I wanted is to play football in college and play in the NFL. As wide receiver for the Golden Bears, I am on track to achieve my goals, but it comes at a heavy price.
Denying who I am—for the sake of my career—goes against everything I believe.
I should never have listened to my high school coach, because all the lies are suffocating me.
Until Keaton Kennedy enters my life, turning it upside down.
Now, there is even more reason to tell the truth, because I’m falling for the famous one and I want the entire world to know. 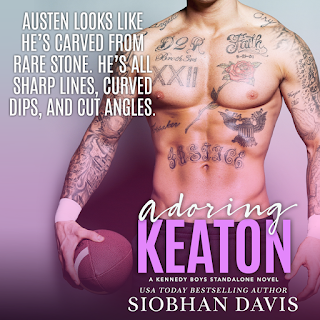 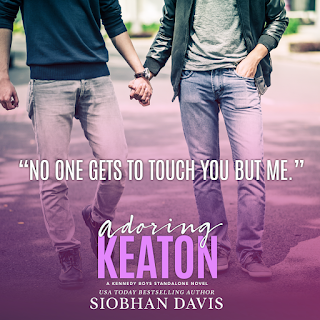 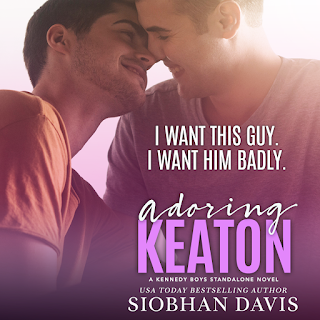 MY IMPRESSIONS OF THIS BOOK:
Not having read the previous books in this series, or any past books from this author, I had no idea what to expect but by the turn of the final page I was completely captivated by this couple and applauding the heartfelt journey they took to reach HEA.  Moments of hard truths, unconditional love and support, and heartwarming exchanges that had the lead couple putting all their cards on the table with each other fueled this story from the moment Keaton and Austen met.  From the moment their friendship started you can feel a weight lifting off them and it brought a smile to my face while it warmed my heart.  Emotional twists and turns, interactions between family and friends, and a love that was meant to be all made for a realistic and beautifully crafted story that fit nicely into the m/m genre.
As part of a famous family, Keaton Kennedy had his life all planned out with the girl, marriage, and kids....but something's been holding him back from fully embracing that life plan.  Though he worries what his family and others will think about his not committing, he still can't bring himself to go down that path and it's become an endless weight on him.  When readers first meet Keaton we see a young man with an air of mystery around him who seems a bit lost and uncertain about what he wants out of life, a life where he's clearly just going through the motions.  He lacks self-confidence too and is full of vulnerabilities and it hurt my heart to see him struggling to find himself and his purpose as he was weighed down by secrets holding him back from finding his HEA...and his other half.  From the very start Keaton's a wonderful hero who owned my heart and it had me rooting for him every step of the way.  He's sweet, kindhearted, and sensitive to the needs of others as he often wears his heart on his sleeve.  Moving to California for school gave him the chance to start anew, opened him up to new possibilities...and introduced him to Austen, a young man keeping his own secrets and who changed Keaton's life irrevocably.  The chemistry between them was off the charts and they quickly moved from friends to lovers in a relationship that saw the walls around their hearts and souls come crumbling down with each turn of the page.  For so long Keaton felt the need to hide, but with Austen beside him he had the unconditional love and support to fully embrace who he really is and it was an immensely satisfying journey he finally embraced.
Austen Hayes is a delicious hero and just what Keaton needed in his life at a time when he was at an emotional fork in the road.  On the cusp of NFL fame Austen has secrets he's keeping too and though he's not out to the world he accepts who he is on the inside.  He's self-assured with a bit of edginess to him that was drool worthy and it's that air of self-confidence that sets him apart from the less confident Keaton who aspires to be more like him.  As their connection deepened their mutual secrets bound them together in a friends to lovers romance that became richer and more empowering as Austen gave Keaton the support he needed to fully embrace his truths.
This was a well-crafted story that dealt realistically and respectfully with issues of sexuality.  Keaton's fears about what others will think, as well as how he thinks of himself, were heartbreakingly understandable and had me aching for him all the more as those fears kept him from moving forward.  Austen's just the man he needed though, a strong and non-judgmental support, and their interactions kept me glued to the pages. Their relationship started out quickly but through numerous emotional roadblocks (ones that frustrated me as well as bringing a tear to my eye) their connection grew stronger and more satisfying while allowing them to grow into the men they were meant to be. Their pairing was sweet and sexy, one full of heart and soul, and it captivated me from start to finish.  Surrounding this immensely likable main couple was a cast of secondary characters who were equally as appealing....among them the other Kennedy family members.  This was a larger than life family, one who was loving and supportive...and they would've been there unconditionally for Keaton from the start had he just spoken his truths sooner.  Their obvious love for family has me wanting to read the previous books in this series to see how Keaton got to where he was at the start of this story as well as finding other characters to fall in love with.  One other character who caught my eye was Austen's friend, Colton.  He was sweet, supportive, and just an all around good guy who I'd love to see more of....that's for sure!  On a whole I found this a realistic and heartwarming m/m read that stands strongly amongst other books in this genre and though this was the first foray into the genre for Ms. Davis I hope it's not her last!
My rating for this is an A-
*I got this book from the author for review in exchange for my honest opinion. 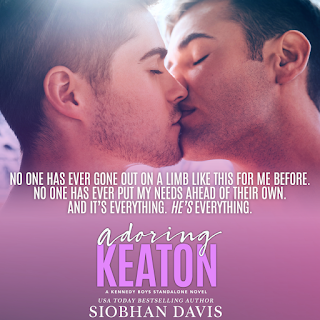 AUTHOR INFO:
I am a USA Today bestselling author and I write emotionally intense young adult and new adult fiction with swoon- worthy romance, complex characters, and tons of unexpected plot twists and turns that will have you flipping the pages beyond bedtime!
My family will tell you I am a little bit obsessive when it comes to reading and writing, and they aren’t wrong. I can rarely be found without my trusty Kindle, a paperback book, or my laptop somewhere close at hand.
Prior to becoming a full-time writer, I forged a successful corporate career in human resource management.
I reside in the Garden County of Ireland with my husband and two sons.
WEBSITE  |  FACEBOOK  |  INSTAGRAM  |  TWITTER  |  AMAZON AUTHOR PAGE  |  GOODREADS AUTHOR PAGE  |  BOOKBUB AUTHOR PAGE
at September 20, 2020