Book Tour for Played By the Rockstar by Christina Hovland (REVIEW)......

A rockstar and a waitress make beautiful music together in this fun and flirty tale of opposites attracting.  Keep reading to get a tempting taste of Played By the Rockstar by Christina Hovland, along with getting my impressions of it, then add this first installment in the Mile High Rocked series to your bookshelf! 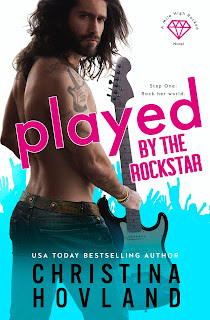 He's a rock star.
She's a waitress.
He's about to rock her world.
Certified behavioral counselor (and former band groupie) Becca Forrester needs a break. Taking a leave of absence from her job, she moves into the apartment over her parents’ garage, and clinches a gig waitressing at a dive bar known for bringing in big name musicians.
Cedric “Linx” Lincoln is a certified rock star. Bassist for the hugely popular rock band, Dimefront, he’s in Denver while the band is on hiatus a-freaking-gain. He's looking for something—anything—to keep him occupied until they can all get back to making music. When he saunters into his friend’s bar, he finds the perfect diversion.
Becca’s presence is a breath of fresh air. The sizzle she ignites in him is precisely what he needs. Bonus: no- stress, no-strings hookups are his specialty. But when things between them tip toward serious, his band implodes, and Becca's leave of absence ends, they’re forced to decide what their “real” lives should look like. Maybe there’s room for an encore...
BUY LINKS:  AMAZON (US)  |  AMAZON (UK)  |  AMAZON (CA)  |  AMAZON (AU) 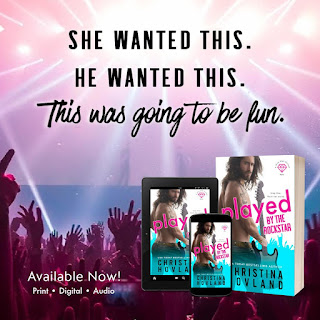 MY IMPRESSIONS OF THIS BOOK:
Readers will find themselves utterly charmed by this tale that's an offshoot of a previous series set in the rockstar world and pulls us back into that world with all its glitz, glamour, and frustrations.  For two immensely likable characters, they find one another at a time of trying to find themselves, and it leads to  some unexpected decisions.  In a world of starting over, two people looking for a fling find something more meaningful in a romance that warmed my heart, made me smile, and fogged up my glasses a time or two.
Cedric “Linx” Lincoln is bassist for the popular rock band Dimefront, a band that's had its own struggles and is again on a break.  Linx isn't the kind of guy who can sit and do nothing though as he's a man who's larger than life, used to traveling the world, with a talent for writing and making music.  He's a sexy beast too with a typically smoldering rockstar vibe.  Below that facade though is a caring man with a big heart, a man who exudes being carefree but is surprisingly thoughtful in his decisions.  I quickly fell in love with Linx during his time away from Dimefront as he was fun and flirty.  He enjoyed just making music, didn't need all the glamour to be fulfilled, in scenes that oozed joy and had my head bopping to the music in my brain.  He made Becca feel like a queen, showed her her true worth, in an enjoyable romance full of heart and soul.
Becca Forrester's always loved music, been a fan of the band Dimefront since she was young.  Imagine her surprise then when she comes face to face with the band's sexy bassist!  Arriving in Denver for her own chance at introspection, feeling a bit lost and burnt out with her job as a therapist, Becca's looking for a brief vacation from her life. She's looking for a bit of fun too...and Linx is more than happy to provide that in a relationship that starts out carefree but soon becomes something much more important to each of them.  Becca's a likable heroine, caring and kind, strong-willed but with bruised self-esteem.  She fit right in with the musicians playing at the bar she worked at though, making them all seem like one big family and solidifying this book as a very satisfying series starter.
This was an entertaining story from the first page to the last, a story with a great pace and likable characters.  Linx and Becca had a sizzling connection from their very first meeting, and though they seemed like opposites due to their lifestyles, they couldn't have been a better match in a connection that warmed my heart.  Along with this appealing main couple was a cast of secondary characters who made this story even more enjoyable.  Becca's mother was utterly delightful in her exchanges with her daughter, exchanges that were endearing and full of humor because of her outspoken nature and larger than life personality.  And then there's Babushka, a character who breathed life and humor into every scene they were in.  Add in the musicians traipsing in and out of Brek's Bar, the band offering Linx a new beginning, and there's the bright promise of more delightful rockstar romances coming our way. On a whole Ms. Hovland has crafted a fun and flirty read with a couple who grew stronger in each other's arms and has introduced readers to another series of drool-worthy rockers that are not to be missed!
My rating for this is an A.
*I got this book from the author for review in exchange for my honest opinion.
AUTHOR INFO:
USA Today Bestselling Author Christina Hovland lives her own version of a fairy tale—an artisan chocolatier by day and romance writer by night. Born in Colorado, Christina received a degree in journalism from Colorado State University. Before opening her chocolate company, Christina’s career spanned from the television newsroom to managing an award- winning public relations firm. She’s a recovering overachiever and perfectionist with a love of cupcakes and dinner she doesn’t have to cook herself. A 2017 Golden Heart® finalist, she lives in Colorado with her first-boyfriend-turned-husband, four children, and the sweetest dogs around.
WEBSITE  |  NEWSLETTER  |  FACEBOOK  |  INSTAGRAM  |  TWITTER  |  GOODREADS AUTHOR PAGE  |  AMAZON AUTHOR PAGE  |  BOOKBUB AUTHOR PAGE
at February 25, 2021