Book Trailer Reveal for When the Storm Breaks by Emery Rose........

A musician and a cowboy are drawn to each other in this angsty romance that pulls at the heartstrings with a connection that sizzles on and off stage.  Keep reading to get a tempting glimpse of When the Storm Breaks by Emery Rose, with this newly released book trailer, then start counting down the days until this second installment in the Lost Stars series hits shelves on March 5th! 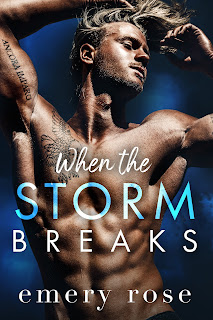 Our worlds never should have collided, but it seemed our paths were always destined to cross. Brody McCallister was only supposed to be a means to an end. My golden ticket to get me closer to what I really needed—a way to make peace with what I’d done when I was eighteen, dirt poor, and left to fend for myself.
I only had six weeks in the middle of a hectic world tour to do it.
So the last thing I needed was to fall for a cocky cowboy. A walking contradiction with a charming grin, a dirty mouth, and a gift for healing wild and broken things.
His life was in Texas.
Mine was on the road.
He guarded his privacy fiercely.
I was constantly hounded by paparazzi.
Everyone warned me it could never work, that ultimately I’d be forced to choose—my music career or him.
I didn’t listen. I fell for him anyway.
Hook, line, and proverbial sinker.
But Brody was hiding secrets.
And when the storm finally broke, it destroyed everything in its wake...including us.
FIND AT GOODREADS here.
PRE-ORDER (AT A DISCOUNT) LINKS:  AMAZON (US)  |  AMAZON(UK)  |  AMAZON (CA)  |  AMAZON (AU)
BUY WHEN THE STARS FALL (BOOK 1) THROUGH THESE LINKS:  AMAZON (US)  |  AMAZON (UK)  |  AMAZON (CA)  |  AMAZON(AU)  |  UNIVERSAL
.....AND NOW, TO MAKE THE WAIT FOR THIS UPCOMING RELEASE MORE BEARABLE, IS THE DAZZLING TRAILER IN SUPPORT OF THIS BOOK.....
at February 12, 2021