Book Blast for Her Timeless Gamble by Nancy Fraser (GIVEAWAY)........

Fans of time travel romances will find themselves drawn to this tale of misconceptions and second chances as a woman ends up in the past and forced into relying on her enemy with romance soon flourishing.  Keep reading to get a tempting taste of Her Timeless Gamble by Nancy Fraser, then discover even more about this book by visiting the other sites hosting this tour. In honor of this first installment in the Love's a Gamble series make sure to fill out the form below for the chance to win a $15 bookstore GC too! 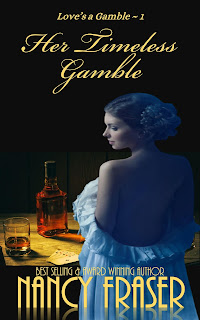 When Matthew McAlister pulls a nearly-drowned woman from the mucky waters of the Mississippi, he has no idea what's in store for him. Or, how easily he'll willingly give up his carefree, love-em-and-leave-em lifestyle for a chance at real happiness.
Kathryn (Kate) Lowell can't believe her bad luck. Or the fact she's somehow been transported from the twenty-first century back to the post Civil War south. Worse yet, into the arms of the one man she grew up hating. The man she blames for her father's recent demise.
Can these two off-kilter and infinitely stubborn individuals fight their mutual attraction? Or, will they give in to the inevitable? And, when the time comes, will Kate choose to stay with Matt in the past, or return to her former life?
EXCERPT:
Kate moaned softly, and lifted a heavy hand to her aching forehead. “Where am I?”, she wondered aloud.
“Just rest. You’re safe, everything is fine.”
The muffled sound of a man’s voice penetrated the throbbing in her head and she struggled to open her eyes, to identify the source. A dim light shone on the man’s handsome features and Kate realized she’d come face to face with the devil. His intense expression, an expression she felt certain could stop rush hour traffic in Times Square, seemed to mock her. Haunt her.
I must be dreaming. That’s it, I’m dreaming. I didn’t really drown, I’m just asleep.
Kate closed her eyes and waited, certain that at any moment she’d awaken. Until then, she’d allow this ridiculous dream to run its course. She’d let this man who looked suspiciously like Matthew McAlister sit at her bedside without so much as a single complaint. After all, it was only a dream, a dream most likely resulting from the trauma of her father’s death. A dream in which her subconscious had conjured up a man who’d been dead himself for nearly a hundred years.
Cautiously, she reopened her eyes and met the man’s darkened gaze.
“Oh my gosh, it is you. And just like my father’s sketches, and the way he described you, right down to the scar above your left brow.”
Unconsciously, Kate suspected, he reached up and ran his finger across the scar. “Someone described me?”
As soon as he spoke, Kate recognized the voice from her dreams. Either she had totally lost her mind or, like Matthew McAlister, she was dead. “I’ve got to be dreaming. This can’t be real. And, you can’t possibly be Matthew McAlister.”
Nervously she scanned her surroundings, taking in the beamed ceiling, the heavy wooden furniture and the brocade coverings. The dim light, she realized, came from an oil lamp on the bedside table.
“Lady, I don’t know who you are, or where you came from, but I can assure you, I am definitely Matthew McAlister.”
She shook her head in disbelief, regretting the quick motion when a shooting pain radiated from back of her head forward. “Where am I? Never mind, don’t answer that. I’m dead. I must be dead because that’s the only way I could be seeing you.” She scrambled for the edge of the bed, saying, “I’ve got to get out of here. I can’t...”
Rather than free herself, her legs tangled in what seemed like yards of bed linens. In her haste to get away, Kate slipped unceremoniously off the edge of the bed and landed flat on her backside, the thick carpet cushioning her embarrassing attempt at escape.
“Are you all right?”, he asked.
Bracing himself on the foot rail at the end of the bed, he reached out and offered his free hand. His gaze settled on her bare legs. A man’s shirt, most likely his Kate realized, rode high on her thighs, exposing far more than she was willing to show.
“All right?”, she repeated nervously. If being insane is all right, then I’m fine. “Are you hurt?”
“No, I’m not hurt. I’m just in a room that looks like something off the set of Maverick, and any minute now a young and rakish Mel Gibson will burst through that door with someone shooting at him, and I’m talking to Matthew McAlister. Other than that, I’m fine.”
Matthew McAlister looked positively baffled by her insane rambling. Yet, when he spoke, his voice held firm conviction rather than confusion. “First of all, you are not dead. And second, who is this Mel Gibson fellow who’s going to burst into my stateroom at any moment?”
BUY (FOR 99 CENTS) LINKS:  AMAZON  |  iBOOKS  |  KOBO  |  BN  |  BOOKS2READ
JIGSAW FANS VISIT here FOR A FUN PUZZLE. 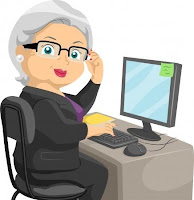 AUTHOR INFO:
NANCY FRASER—Jumping Across Romance Genres with Gleeful Abandon—is an Amazon Top 100 and Award-Winning author who can’t seem to decide which romance genre suits her best. So, she writes them all.
Like most authors, Nancy began writing at an early age, usually on the walls and with crayons or, heaven forbid, permanent markers. Her love of writing often made her the English teacher’s pet which, of course, resulted in a whole lot of teasing. Still, it was worth it.
Published in multiple genres, Nancy has published over thirty-five books in full-length, novella, and short format.
When not writing (which is almost never), Nancy dotes on her five wonderful grandchildren and looks forward to traveling and reading when time permits. Nancy lives in Atlantic Canada where she enjoys the relaxed pace and colorful people.
WEBSITE  |  FACEBOOK  |  TWITTER  |  BOOKBUB  |  AMAZON AUTHOR PAGE  |  GOODREADS AUTHOR PAGE  |  PINTEREST  |  YOUTUBE  |  NEWSLETTER  |  INSTAGRAM
**********GIVEAWAY**********
a Rafflecopter giveaway
at February 03, 2021