One time friends who lost themselves as life became rocky makes for an emotionally intense tale of second chances that pulls at reader's heartstrings.  Keep reading to get a tempting taste of Fletcher by V. McFarlane, along with my impressions of it, then add this first installment in the Boys of HGU series to your bookshelf! 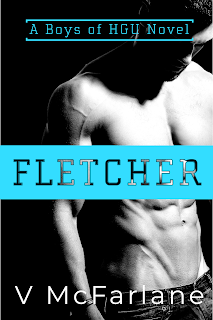 Just one night....
I should have known that just one night would never have been enough.
Not when Peyton Mckenna has been the only girl I’ve ever dreamed of.
We were friends once, best friends but to me she was always the girl I couldn’t have. It didn’t stop me wanting though.
But then everything changed, our worlds exploded and I pushed her away, too caught up in my grief and confusion of still wanting the girl that belonged to someone else.
For three years I avoided her as if everything that happened that night was her fault, but the truth was, the guilt of seeing her, still wanting her was tearing me apart but I was becoming weak.
Weak enough to let her back in.
Weak enough to hold her.
Weak enough to take that taste I’d always denied myself.
It was a betrayal.
But never a mistake.
And now I want more.
Our paths were too tangled, our lives forever on a collision course. This was my destruction and we had always been destined to fail.
FIND AT GOODREADS here.
BUY LINKS here. 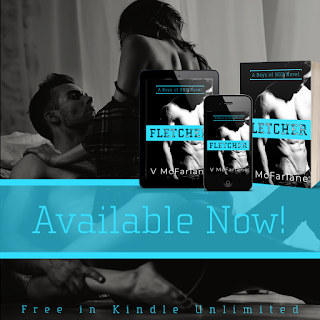 MY IMPRESSIONS OF THIS BOOK:
After the carefree book I just finished reading this one seemed to be its exact opposite as it was an angst-fueled romance of two people who longed to be with each other but because of a past connection they don't feel that they can be.  It's a forbidden romance of sorts, full of push/pull moments, that frustrated me a time or two on a hard-fought journey to HEA.
Peyton and Fletcher's journey is a bumpy one that started when they were young.  Starting out as friends soon led to stronger feelings that caught them by surprise at a time when Peyton was dating Fletcher's brother.  When tragedy strikes though everything changed between the two of them, years of hurt and self-doubts, in a story that had me rooting for them to work past their self-imposed penance.  This pair was clearly meant to be with a connection that crackled, a connection that felt just right, but they let a lot of outside forces keep them apart.  They knew they wanted to be each other's other half, but treated each other as a dirty little secret in a romance that left me screaming at their stubbornness a time or two.  Despite my occasional frustrations with this couple I still found myself drawn to them, drawn to their melodramatic choices, and steamy interludes.  Theirs was a romance that was rocky overall but oh so satisfying as I turned the final page.
Set against a backdrop of college football, and told in dual POVs, this is a story that gives readers glimpses of the past as well as ramifications of choices made now.  There are moments of angst, as well as moments of sweet and sexy interactions, that kept me glued to this couple's journey of second chances.  Surrounding this conflicted couple were the other members of their close knit friend's group, Decker and Colt.  These two were early supporters of Peyton, protective of her like big brothers, and I enjoyed the camaraderie they all had with one another and long to get more insight into these two friends as the series progresses.  On a whole I found this an emotionally engaging romance that pulled at my heartstrings.  While it's not perfectly crafted, it did have me frantically turning the pages, and it has me greatly anticipating the next installment in this series with Decker taking center stage!
My rating for this is a B.
*I got this book from the author for review in exchange for my honest opinion.
AUTHOR INFO:
V McFarlane is an indie author of emotional and steamy contemporary romance. She lives in the South of the UK with her husband and daughter. When she's not writing, you'll find her with her nose in a book or listening to music and dancing with her daughter!
An avid lover of all things romance, a complete sucker for bad dad jokes and lives for coffee!
You can find her on most social media outlets at:
INSTAGRAM  |  FACEBOOK  |  GOODREADS AUTHOR PAGE  |  FACEBOOK READERS GROUP  |  NEWSLETTER
at February 20, 2021