Opposites definitely attract in this charming and sensual romance of a single mom and the bad boy tattooist who shows himself to be oh so good the closer they get to each other and the more her past comes back to haunt her.  Keep reading to get a tempting glimpse of Hawk by Kat Savage, along with my impressions of it, then add this first installment in the Men of Bird's Eye series to your bookshelf! 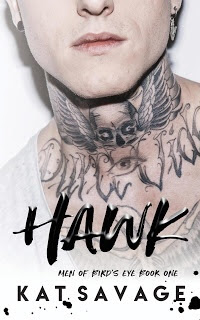 Hawk Tanner is not a man of many words—especially if you’re a silly girl getting a silly tattoo in his shop.
The owner of Bird’s Eye Tattoo Studio doesn’t want you to tip him with your phone number or flirty glances. He’s tired of all the wrong women wanting him for all the wrong reasons.
Drew Ashby has no time—for anything. As a recently-divorced single mother, her focus is on finding a job, caring for her daughter, and rebuilding some semblance of a life after hers was wrecked.
When Drew lands a job at Bird’s Eye, sparks don’t immediately fly. She can't deny the fact that her boss is a delicious specimen of a man. His tattoo-covered skin might even drive her wild, but his brooding presence and set jaw make him hard to read.
That is, until he drops the bad boy persona and starts making moves on her—kind and caring gestures she doesn't expect.
Things turn hot, and just when Drew thinks everything is finally going right, life does what it does best: It throws her a curveball from her past.
Bird’s Eye might not be the family Drew envisioned for herself, but ideals can change in a heartbeat.
There’s no doubt Hawk is the man she wants, but can he step up and be the man she needs?
FIND AT GOODREADS here. 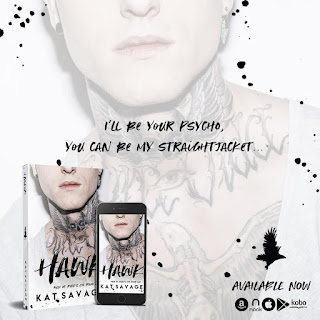 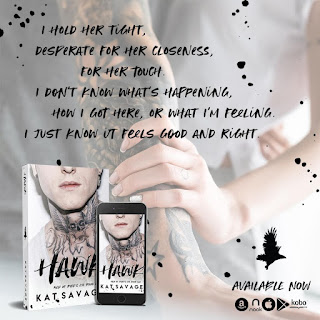 MY IMPRESSIONS OF THIS BOOK:
From the moment I started reading this book I became captivated! From a delicious hero, to a strong-willed single mom, to an unconventional family of secondary characters, this was a story with an entertaining flow amidst a storyline full of heart and soul.  By the turn of the final page readers will be left sighing in satisfaction of a well-crafted tale that pulled at the heartstrings while putting a smile on your face.
Hawk Tanner's the kind of hero you dream about!  When readers first meet him he seems a bit rough around the edges, brooding and covered in tattoos he's an intimidating sight, but as the story progresses you discover a caring and protective man. His past was rocky and it's made him leery of letting others in, but for those select few who work at his shop he's someone who's always there when you need him.  He's the head of their unconventional family and the glue that holds everyone together.  The moment he laid eyes on Drew he knew he was a goner, with the instant spark that flared between them having him slowly but steadily trying to win her over.  Though there was a lot of push/pull at the start of their connection, it wasn't long before things turned steamy between him and Drew.  Theirs was a relationship that was put to the test when her past comes back to rear its ugly head and it was then that I was especially grateful for Hawk being so protective.  While I enjoyed watching Hawk and Drew grow closer, I absolutely loved seeing Hawk and Ava grow closer.  Hawk treated her as a person, not as a means to an end when it came to Drew.  Their interactions were sweet and charming and brought out a fatherly side to his personality that made my uterus hurt.  From start to finish Hawk was an utter delight and is a new addition to my list of book boyfriends.
Drew Ashby's life took an unexpected turn when her husband decided he'd had enough...enough of being a husband and a father.  She's now a single mom to her delightful little girl Ava, living with her aunt, and working for a gruff man covered in tattoos.  When readers first meet her she's just trying to get through each day, but the more time she spends around her boss Hawk the more time she finds for romance in a sweet and sexy journey of starting over and second chances.  Drew's an admirable heroine, a tough cookie whose life revolves around her daughter, and their scenes together were beautiful.  Their interactions were realistic and showed how strong of a bond they had, a bond made even more endearing by Hawk becoming a part of their life. Just when everything seems to be going her way though her past comes back to interfere with her future in moments that frustrated me but once again showed Hawk to be the quintessential hero!
On a whole this was an entertaining series starter with a wonderful main couple, an endearing little girl, and an appealing cast of secondary characters who lent an air of family to this story.  Hawk is pure perfection...quiet and commanding, but loud when it comes to wooing Drew, in a romance full of heart and soul!  Drew's a feisty single mom, one who would sacrifice all for her daughter, and I was drawn to her burgeoning relationship with Hawk and their endearing journey to becoming a family.  Theirs was a sweet and sexy romance, with a bump or two along the way, that had me cheering them on every step of the way.  When it comes to the secondary characters this book had an entertaining collection of them.  I don't normally like kids in my romance books but Ava was immensely likable, real in her interactions, and not used just for drama.  She was an integral part of the story and brought out a softer side to Hawk that made me love him all the more. The other workers at the Bird's Eye Tattoo Shop were another enticing addition to this story, misfits in their own ways because of equally painful pasts, and together this was the kind of family I'd love to be a part of and that has me greatly anticipating the next installment in this series!  Ms. Savage crafted a winner with this release and I look forward to revisiting these characters again soon!
My rating for this is an A.
*I got this book from the author for review in exchange for my honest opinion. 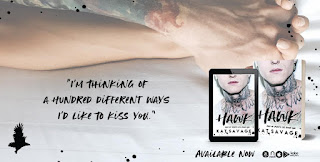 AUTHOR INFO:
Kat Savage resides in Louisville, Kentucky with her three beautiful children, her hunky spouse, and two spoiled dogs. She secretly has hope of getting chickens one day.
By day, she’s an office manager, pushing paperwork and daydreaming. When she’s not at her nine-to-five, she’s writing. Or thinking about writing. Or preparing books and book stuff. Or quite possibly, designing stuff for other people’s books.
She was driven to writing out of a need for distraction and self-preservation after the death of her sister in 2013. Since then, it’s snowballed into a full blown passion she can’t escape. Even on the toughest days, she wouldn’t want to.
She writes poetry packed with real, raw, and sometimes ugly truths. She won’t lie. Her goal is to make you ache, in that perfect delicious way we often secretly crave.
Shortly after putting her poetry and prose out into the world, she turned to novel writing. Savage is a natural storyteller, getting better with each book. She tries to give the characters in her novels depth, whether they’re serious or comical, she builds them in layers with the hope that you see a little of yourself in some of them.
WEBSITE  |  NEWSLETTER  |  FACEBOOK  |  FACEBOOK READERS GROUP  |  TWITTER  |  INSTAGRAM  | GOODREADS AUTHOR PAGE  |  AMAZON AUTHOR PAGE  |  BOOKBUB
at February 23, 2021