Betrayal and danger is balanced with unexpected attraction in this steamy and suspenseful tale set in the MC world that will keep readers frantically turning the pages.  Keep reading to get a tempting taste of Grave by Erin Trejo, along with my impressions of it, then add this first installment in the Royal Devils series to your bookshelf! 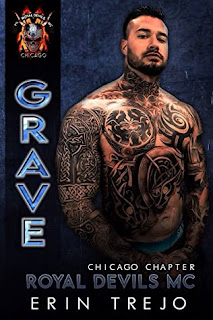 I was left for dead. I had a plan the whole time, I just needed to execute it precisely. Silla wasn’t part of my plan but I couldn’t leave her on her own. Finding out who she was was a shock to me. Yet, I liked the mouthy girl and she would come in handy. Now we’re going to take over the club. One member at a time.
BUY LINKS:  AMAZON  |  UNIVERSAL  |  iBOOKS  |  BN  |  KOBO  |  GOOGLE PLAY
MY IMPRESSIONS OF THIS BOOK:
From the moment I started reading this book I could feel my heart start pumping faster and faster with each turn of the page.  Set in the MC world the action was gritty with the promise of bloodshed always present as a journey of revenge, and a need to set things right, played out for readers through numerous twists and turns.  As the anger of a man and woman drove them to revenge though it also drove them towards each other in a sizzling romance teeming with eroticism and moments of surprising heart and soul.
Grayson "Grave" Christianson has been at the center of the Royal Devils MC since the day he was born, the son of the club's president - Cash.  It was a difficult childhood for Grave though, one full of abuse, and feelings of hatred constantly emanating from his father that ultimately led to a heinous act that changed Grave's future forever.  Aspects of Grave's childhood were emotionally and physically painful, but the brotherhood is what binds him to the club through it all.  He and his four close friends....Psycho, Freak, Mystic, and Preacher...were closer than blood and with each turn of the page they support each other through the dangers Cash has brought to the club as they work together to make a better future for each other.  Through it all Grave was a compelling hero, one who's rough around the edges but who still has a good heart and a code of honor antithetical to his father.  He's protective of Silla the moment he sees her but never discounts her abilities and is happy to have her by his side as he enacts his plan to right his father's wrongs.
Silla Prescott's a badass heroine whose childhood was equally traumatic due to her father's cruelty and need to use her as a weapon.  She's been groomed to be a hitman and has the scars (both inside and out) to prove it.  She's good at her job, but she has a code of honor that fuels her actions and it's what led to her own recent near-death experience. She too is now on the run from her enraged father and decides to stand by Grave so that he'll stand beside her when she needs him most in a gritty and sizzling romance.  Silla's a formidable heroine, one who gives as good as she gets, one who fits right in with Grave's brothers and she radiated strength during scenes of danger and suspense. During their more romantic moments though she showed a bit of vulnerability, sadness and self-doubt over her scars, that had me aching for her. Through it all she was a commanding presence in every scene she was in.  She was an intriguing dichotomy that had me rooting for her and Grave every step of the way in this exhilarating series starter.
As a fan of MC romances I was immediately drawn to this story and its pulse pounding opening chapter.  From there a journey of revenge was beautifully balanced with a super sexy romance that added a blush to my cheeks a time or two.  With its unforgettable main couple I quickly became captivated by their journey and fully immersed in all the action and suspense that befell them.  Alongside this exciting main couple was a cast of equally compelling secondary characters, one's who have me eagerly anticipating more stories to come.  Among those characters is Psycho, a brother who suffers from mental illness and whose illness is being used by Cash to dole out bloodshed.  The snippets of his past that readers are shown are heartbreaking and I anticipate a story that will require plenty of tissues as I count down the days until his story takes center stage.  On a whole this was a great read, but it felt a bit rough when it came to the narrative. Things happened quickly, lots of jumping around with lots of different characters introduced throughout the story, kept me glued to the pages in this whirlwind series starter that I definitely recommend!
My rating for this is a B+
*I got this book from the author for review in exchange for my honest opinion. 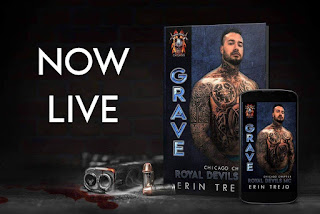 AUTHOR INFO:
Erin is an author of all things Alpha. Her specialty is MC romance but loves to dip into dark romance too. She will weave you a story that will have you gasping for air as you try to figure out what's going to happen next. All of Erin's books will have some form of romance as well as suspense. With that being said you need to keep in mind that Erin's tagline is always true. Fairy Tales Don't Always Have A Happy Ending. Do you think you're ready to take the plunge into Erin's world?
NEWSLETTER  |  BOOKBUB  |  FACEBOOK AUTHOR PAGE  |  FACEBOOK READERS GROUP  |  AMAZON AUTHOR PAGE  |  TWITTER  |  INSTAGRAM
at February 11, 2021