An ER nurse and a firefighter create sparks in this romance of frenemies to lovers, a tale full of witty banter and sexual tension.  Keep reading to get a tempting taste of Fighting the Fire by Laura Kaye, as well as a message from the author regarding this crackling romance hitting bookshelves on March 30th.  In honor of this fourth installment in the Warrior Fight Club series visit Goodreads for the chance to win a copy of this book as well as filling out the form below for the chance to win 1 of 3-$5 Amazon GCs too!
Dear Readers,
I’m so excited to share my new standalone romance, Fighting the Fire! This is the fourth book in my Warrior Fight Club contemporary romance series, which mixes military and sports romance elements to tell the story of an MMA training club which creates a found family for veterans transitioning to civilian life and dealing with their war-borne demons. In Fighting the Fire, Sean and Daniela are two of my favorite characters I've ever written--they're both strong, loyal, snarky, and hiding some pretty deep hurts that in the end make them so perfect for each other. And all that frenemies tension makes the chemistry between them hot AF! I hope you love them as much as I do!
xx Laura Kaye One night is never enough...
For firefighter Sean Riddick, Warrior Fight Club keeps the demons of his past at bay, even though it means seeing Daniela England. Her ball-busting sarcasm drives him nuts, and he knows he’s damaged goods anyway, but he can’t help but remember how good they were together that one time. Now he wants to take her to the mats no matter how much they go toe to toe.
ER nurse Daniela England has lost so much that she’s vowed never to need anyone again. Fight club helps her beat back her survivor’s guilt, but it means dealing with Riddick. The hot- but-infuriating firefighter is everything she wants to avoid, which is why their one-night stand was a mistake. Now she needs to keep her distance so it doesn’t happen again.
But when Dani witnesses Sean’s motorcycle accident, she steps up to help him recover. One on one, they get beneath all the snark and find a connection neither expected. As Sean heals, the sparks between them burst into red-hot passion—and ignite old wounds. Now there are fires all around—and they have to decide which they’ll fight and which they’ll let consume them.
EXCERPT:
As Daniela dropped her bag on the bleachers at Full Contact MMA, her bad day had her sighing. “Maybe I just need to beat the crap out of something—or someone.”
A warm breath at her ear was all the warning she got. “Got anyone in mind, Daniela?”
Sean Riddick said her name as if his tongue caressed every letter, and she cursed the shiver that raced up her spine—the shiver that resulted from knowing exactly how damn good his tongue felt. She turned slowly, lazily, as if she were bored to tears. No way was she letting him know he got to her. So she gave him a once-over that she hoped read as full of disdain.
Even though, damn. DAMN.
So tall she had to tilt her head back to roll her eyes at him. Dark hair cut short because it curled when he let it get even a little length to it. With scars near his eye and hairline and a nose that had been broken, his face was too beat up to be handsome. But it was even more interesting for having character—of the fearless, I-run-into-burning-buildings-to-save-people-and-sometimes- get-hurt-doing-it variety. And then there were the tattoos—on his neck, shoulders, arms, the back of one hand, not to mention the hard muscles underneath, because of course the guy was freaking cut, with shoulders like mountains and thighs like tree trunks. Sean oozed unquestionable strength and a fierce masculinity.
He knew he looked good.
He wasn’t wrong. Damn him.
And damn her for being stupid enough to find out just how good he was. Just that once.
But it’d been enough to keep her body attuned to him even as her head screamed been there, done that, shouldn’t have done it the first time and ain’t doing it again. Dani sniffed. “Not you.”
His grin was pure wicked sin. “You sure about that?”
She sighed. “Absolutely.”
He gave a low chuckle. “Well, you’re welcome to try to beat the shit out of me any time.”
“Don’t you have anyone else to irritate?”
“Oh, I irritate you, do I?” he asked, dropping his bag to the floor. He winked at their friend, Tara. “Hey, T.”
“Hey, Sean,” Tara said, amusement plain in her voice.
Just then, one of the few other women who belonged to WFC walked through the door. “Oh, Jayne’s here,” Dani said, surprised because her friend hadn’t attended in weeks.
Without another word to Sean, Dani and Tara left him to greet her.
Halfway across the gym, Tara leaned in close. “Seriously, do you really dislike Riddick or are the two of you in a perpetual state of foreplay?”
Dani threw her a look that made the other woman chuckle. “Ugh, you really can’t tell?”
Tara twisted her lips and shook her head. “Nope. But something’s different between you guys lately, and I’m dying to know the story.”
“There’s no story,” Dani said. Probably too fast. Definitely too fast, given that Tara had also picked up on the heightened friction between them. Because, of course, there was a big freaking story.
So. Big. 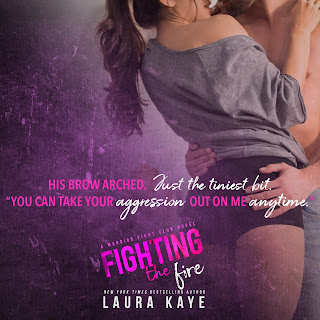 PRE-ORDER LINKS:  AMAZON  |  iBOOKS  |  BN  |  KOBO
**FIND THE WARRIOR FIGHT CLUB SERIES ON GOODREADS here.**
**SIGN UP AT GOODREADS here FOR THE CHANCE TO WIN A COPY OF THIS BOOK.**
AUTHOR INFO:
Laura Kaye is the New York Times, Wall Street Journal, and USA Today bestselling author of over 40 books in contemporary, erotic, and paranormal romance and romantic suspense, and has sold nearly two million books in the U.S. alone. Laura grew up amid family lore involving angels, ghosts, and evil-eye curses, cementing her life-long fascination with storytelling and the supernatural. A former college history professor, Laura also writes bestselling historical women's fiction as Laura Kamoie. Laura lives in Maryland with her husband and two daughters, and appreciates her view of the Chesapeake Bay every day.
WEBSITE  |  FACEBOOK  |  READER GROUP  |  TWITTER  |  INSTAGRAM  |  FREE BOOKS
**********GIVEAWAY**********
a Rafflecopter giveaway
at February 01, 2021