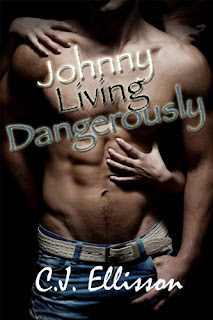 Johnny is lead singer in an all-girl, hot-pants-wearing band. Experience the sexy young man's conquests one summer as he sets out to bang each gorgeous band member.

Juanita, the hot-blooded drummer; Rachelle, the base guitarist with a secret; Ginger, the redheaded lead guitarist; and quiet Kimmie, the keyboardist who prefers girls.

Will he met his goal or will one or more of the ladies find out about his plans?

********************
I was excited to start reading this book since I LOVE rock star stories.  There's something super sexy about how they command the stage and their sex appeal off is even more intense.  Johnny lives up to this rock star persona jumping in and out of relationships.  He's looking for fun and there's plenty women to oblige him.  The sexual encounters he has with a bar owner and his bandmates are varied and intense but you sense the superficiality.  Things become stale for him and soon being a boy toy loses its charm.  Going after bandmate Kimmie though for something more serious is an uphill climb for him to prove he's serious.  While I enjoyed the steamy scenes, it was this part of the story I most enjoyed and wished to see more of.  I wanted to see something more to Johnny and in his interactions with Kimmie I saw glimpses of a very likable yet self-conscious man.  The female characters were each unique but not much is known about them beyond their sexual activities.  Kimmie's the only one with a bit more fleshed-out character and the story ends just as we get to know more about her.  All in all this was an entertaining read very short on substance.  The sexual encounters were steamy but led to a lot of character development being left by the wayside.  I had hoped for a bit more but those looking for more BANG for your buck need look no further than this story.
My rating for this is a C+ 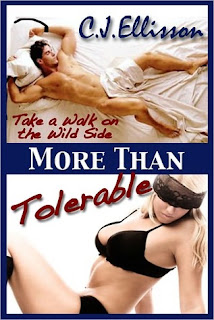 More Than Tolerable by CJ Ellisson
Candy thinks ordering her lovers to do what she wants will keep her heart safe and leave her in charge of her own destiny. Not surprisingly, her sexual experiences fall flat and she continues to search for more.
Tommy, one of her co-workers, has been hot for the sexy blond for months. He's bound and determined to convince her he's the one she's been searching for, even if she believes a fellow accountant would make a boring bedmate.
Can the two come together to unlock Candy's sexual awareness or will her own fears push Tom away?
********************
This is a short friends to lovers story long on the entertainment.  Candy has been searching for a long time for just the right man to satisfy her.  She goes from one man's bed to the next hoping to find the kind of man she dreams about.  Even though he's been attracted to her for months, Tommy isn't the kind of man she thinks can excite her.  He soon proves her wrong through inventive sexual encounters and teaching her that letting go of her rigid control can be a good thing.  There was good characterization in this book even though it was a short story.  We actually get to know Candy and why she fights to keep control and by being with Tommy we see a different side of her emerge.  Tommy is immensely likable himself and sexy to boot.  I enjoyed how he treated Candy and their constant verbal foreplay and hated to see the story come to an end.
For those wanting the perfect blend of storyline and steamy sexual encounters give More Than Tolerable a chance.  It's a great way to warm up on a chilly afternoon.
My rating for this is a B.
*I received both of these books from the author in exchange for my honest opinion.
at December 31, 2011