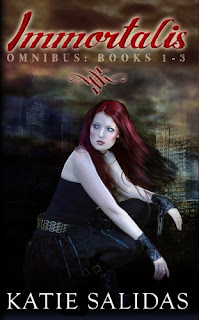 Becoming a vampire is easy. Living with the condition... that's the hard part.

Join Alyssa as she stumbles through the world of the "Unnatural" in the first three books in the Immortalis series.

Book 1: Immortalis Carpe Noctem
Rescued from a brutal mugging on the college campus of UNLV, 25 year old Alyssa is initiated into a frightening, eternally dark world she never knew existed. The world of the vampire.

Stricken with cravings of blood, and forced leave behind all she knew, Alyssa struggles with the change. And Lysander, her sexy but aloof sire, is the only one who can help guide her.

There's no turning back now. It's either, Carpe Noctem, or final death.

One is the hunter and one is the prey. Simple, right? Not for newly-turned vampire Alyssa. A surprise confrontation with Santino Vitale, the Acta Sanctorum's most fearsome hunter, sends her fleeing back to the world she once knew, and Fallon, the human friend she's missed more than anything.

Now she has some explaining to do. However, that will have to wait. With the Acta Sanctorum hot on their heels, staying alive is more important than educating a human on the finer points of bloodlust.

Book 3: Pandora's Box
After a few months as a vampire, Alyssa thought she'd learned all she needed to know about the supernatural world. But her confidence is shattered by the delivery of a mysterious package - a Pandora's Box.

Seemingly innocuous, the box is in reality an ancient prison, generated by a magic more powerful than anyone in her clan has ever known. But what manner of evil could need such force to contain it?

When the box is opened, the sinister creature within is released, and only supernatural blood will satiate its thirst. The clan soon learns how it feels when the hunter becomes the hunted.


********************
Into the world of vampires comes this collection of stories written by Katie Salidas.  The world she's created is full of action with memorable characters and truly nasty villains and just when you think you know what's going to happen you end up completely surprised.


The first story in this collection, entitled Carpe Noctem, begins the Immortalis series and introduces us to newly turned vampire Alyssa and her mentor Lysander.  Lysander has been around for many centuries and is very old-fashioned and lonely.  He's very charming though, and of all the vampires that could have turned her, Alyssa's lucky he was the one.  He's very protective of Alyssa and tells her only what he thinks she needs to know.  Alyssa understandably doesn't accept her change easily.  She's hysterical a good amount of the time and has a hard time accepting what she now has to do to survive.  I did understand her issues but it did become annoying after awhile.  Clearly at the beginning their relationship is very unequal.
The big bad in this story, the Acta Sanctorum, is a group of religious zealots bent on destroying all vampires.  They don't discriminate and lump together all vampires as evil.  Their best killer Santino is a vampire himself though and only allowed to live because of his oath.  He's a deadly hunter and things become a blood bath when he's involved and using Alyssa as bait makes the situation even more deadly.
The next story in this collection is Hunters & Prey and introduces us to an even deadlier enemy.  Human psychic Quinten has a nefarious plan to eliminate vampires and tries to use Alyssa to accomplish his mission.  He's a very evil character, worse than Santino, and is willing to sacrifice humans to see his plan through to the end.
Alyssa's human friend Fallon is introduced in this story and it adds an interesting dimension to the story and the relationship between Lysander and Alyssa.  Fallon's a likable character and seeing her interact with the vampires leads to a few chuckles.
This story is the most action-packed of the three and it moved along at a fast pace.  Just when you thought things were going one way you found out you were wrong.  And when old enemies become friends you're even more surprised.
The final story is Pandora's Box and involves an evil spirit taking revenge on all vampires.  There's some tears in this story as well as an introduction to the werewolf community.  I must say that there were some very sexy werewolves in this story and I'd certainly love to see a series revolving around them.
While there was some action in this one it was definitely the most talky of the three.  I found my mind wandering from time to time and it wasn't until the final confrontation that I became fully invested in the story once again.  The ending is a sad one with no definite conclusion.  It was an intriguing ending but a frustrating one as well.
The sexual relationship between Alyssa and Lysander is an intriguing one.  They're both very different people but they've made it work.  He was a lonely man and she's definitely brought excitement to his life.  She has a tendency to look before leaping and that led to a lot of extra bloodshed.  In that respect I found her annoying.  I had hoped to see her mature being around an ancient like Lysander but that never really happened.  Their sexual chemistry wasn't lacking though and those times together were very steamy and nicely paced throughout the entire collection.
There was an interesting collection of secondary characters throughout the series, both vampire and werewolf.  They all played an important part in the storyline and I'd love to see more of them in the future.
All in all this was an entertaining series full of memorable characters and edge of your seat action.  Ms. Salidas is not afraid to eliminate important characters to keep the story interesting and I applaud her bravery.  Although I had hoped for a stronger heroine, the amazing hero more than made up for what she lacked.  For lovers of the paranormal, Ms. Salidas has created a new series that you'll be wanting to add to your reading list and I'm sure you'll be thanking me later.
My rating for Carpe Noctem is a B+
My rating for Hunters & Prey is a B+
My rating for Pandora's Box is a C+
*I received this book from the author in exchange for my honest opinion.
at December 08, 2011