Book Tour for In Her Sights by Robin Perini

There's a brand new author on the block and her name is Robin Perini.  Courtesy of Tribute Books she's here today to talk about her new release In Her Sights.  So let's get right to it and take it away Robin......


Hi there, and thanks so much for inviting me today. It's so exciting since my debut novel, In Her Sights, has barely been out a week. I can't believe it. Jasmine "Jazz" Parker—my SWAT Team sniper heroine—has been in my heart for several years. I'm thrilled Montlake Romance chose to publish her story.
I also noted that today is December 7—some would argue the most significant day in American history—the attack on Pearl Harbor. Japan's attack on the naval base brought the United States into World War II.
According to the National Park Service's website:
2,388 Americans died in the attack
1,178 Americans were wounded
21 American ships were sunk or damaged
323 American aircraft were destroyed or damaged
I've had the honor of visiting the U.S. Arizona. You can still see a trickle of oil rising from the wreckage over a half-century later. It is one of the those places in the world where the air stands still around you and there is an indescribable feeling of sadness.
World War II has special meaning for me because my grandfather and five of his brothers—one of whom was born in Italy and the other five were first generation Americans—served in World War II. They survived and came home, but so many didn't.
How does this relate to my book? In two ways. Jazz is a hero—though she doesn't see herself as one. All you have to do is read accounts of the heroes from this or any era to know that heroes never see themselves as such.
The second connection is that Jazz is a sniper. As I was researching snipers, I discovered that during World War II, the Soviet Union enlisted somewhere between 1000 and 2000 woman with excellent visual acuity as snipers. A woman's flexibility, improved patience and cunning were extolled as virtues. They were also thought to be more resilient than men under combat stress (Pegler, Martin (2006). Out of Nowhere: A History of the Military Sniper)
Only 500 female snipers survived the war, but their success rate was impressive. Lavdiya Kalugina was one of the youngest Soviet female snipers. She was 17 at the start of her military service in 1943. The highest ranking female sniper (in the history of any army) was Ludmila Mihaylovna Pavlichenko (of the 54th rifle regiment) with 309 kills. She was the first Soviet citizen to be received by American President Franklin Roosevelt. Pavlichenko was also invited by Eleanor Roosevelt to communicate her bravery and heroism to the American public.
Today, shooting is one of few sports where men and women can compete equally. Jazz, my heroine, is special on her team. She can thread the eye of a needle with a bullet, but retains her heart. She follows a history of men and women who sacrificed everything for their country. Heroes all.
May we never forget their sacrifice.
Thanks so much for having me. I love to hear from readers. Please connect with me. You can get in touch via my website, www.robinperini.com where you can view the In Her Sights book trailer, read excerpts, read reviews, sign up for my mailing list and even request trading cards or a Kindlegraph. I'm also on Twitter, Facebook, and Goodreads. I'd love to hear from you. 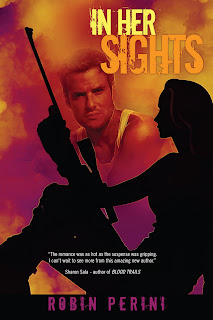 IN HER SIGHTS by Robin Perini
Price: $13.95
ISBN: 9781612181523
Pages: 262
Release: November 29, 2011
Jasmine “Jazz” Parker, Jefferson County SWAT's only female sniper, can thread the eye of a needle with a bullet. But she carries a secret from her past that she thought she buried for good at the age of fifteen. Two years ago she even drove away the one man she believed she could love—ex-Army Ranger turned reporter Luke Montgomery—to keep her past hidden. Now, in a fleeting second, the time it takes for one clean shot, one perfect hit, to save the life of the governor's daughter, Jazz's world begins to crumble around her.

Luke splashes her face and name across the front page of the newspaper, reawakening her past with a vengeance. A vicious enemy is now bent on destroying her life, forcing Jazz to turn to the one man she can never have in order to stop a killer before she and everyone she cares about pays the ultimate price. Full of explosive action and almost unbearable suspense, In Her Sights is a relentless, steamy thriller surprisingly infused with soul and poignancy. 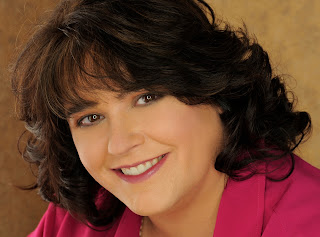 AUTHOR BIO:
Award-winning author Robin Perini’s love of heart-stopping suspense and poignant romance, coupled with her adoration of high tech weaponry and covert ops, encouraged her secret inner commando to take on the challenge of writing romantic suspense novels. Her mission's motto: "when danger and romance collide, no heart is safe."
As a writer, Robin is devoted to giving her readers fast-paced, high stakes adventures with a love story sure to melt their hearts. Robin’s strong characters and tightly woven plots have garnered her seven prestigious Romance Writers of America Golden Heart® finals, and Golden Heart Winner in 2011. Stolen Lullaby, will be published by Harlequin Intrigue® in May, 2012 as Finding Her Son. Her other 2011 Golden Heart® Finalist, In Her Sights, will be published by Amazon's Montlake Romance November 29, 2011.
By day, she works for an advanced technology corporation, and in her spare time, you might find her giving one of her many nationally acclaimed writing workshops or find her training in competitive small-bore rifle silhouette shooting. She's a voracious reader and a die-hard fan of the T.V. series, BONES.
To learn even more about Robin and her new release In Her Sights, you can catch her at other stops along the tour that you can find listed here.
at December 07, 2011