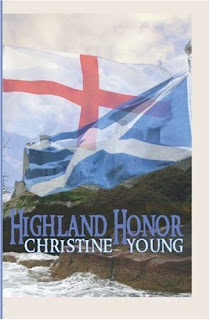 Willfully stubborn, innocently courageous, Callie Whitcomb braves a journey through the treacherous highlands to the MacPherson castle. Callie flees from an unwanted marriage as well as her ruthless half brother. Naively she believes Colin MacPherson, the head of the clan, is loyal to her father and will give her sanctuary, protecting her from the vile plans that have been made for her.

As hard and as unyielding as the winter storms that sweep through the countryside, Colin is irresistibly drawn to the impetuous beauty who has magically appeared on his doorsteps. Despite his vows of revenge against her father, she stirs his passion as well as his sense of justice...but to love her would violate all his vows of revenge.


********************
This is the first book in a series featuring sexy Highlanders and the outspoken women surrounding them.  It's an intriguing read with memorable characters and a satisfying start to an entertaining series that I look forward to reading more of.

This is a story about honor and revenge and who's really to blame in the rugged world of the Highlands.  For Clan MacPherson, their hatred is focused on the Whitcombs whose patriarch they believe put their Laird to death.  Revenge is never simple though as Colin MacPherson soon finds out upon meeting Callie Whitcomb.  And as much as he wants to despise her, he finds himself falling in love with her and marrying her to protect her from her vile step-brother.

This was a nicely paced story full of conflicting emotions.  Colin is a strong character who just wants to do what's right for his clan while living up to his chivalrous nature by protecting Callie.  There were times I found him overbearing in his dealings with Callie and his sister though.  But then he'd pile on the charm and sexiness and win me over again.  Callie too was a character that I found irritating at times.  There were times she seemed overly naive and weak in temperament.  Even though she'd been through a lot before coming to Colin, I would've hoped that would've made her stronger and more of an equal to Colin.  In their sexual interactions though they were very in sync.  These scenes were sexy and romantic and nicely spaced throughout the story.

The villains in this story were truly nasty and added an interesting layer to this story through their actions.  Along with these entertaining villains are some wonderful secondary characters.  Colin's brother and sister and best friend being the most memorable and ones that I look forward to reading more about.

All in all this was an enjoyable historical read with beautiful scenery that drew you into the story with memorable characters that kept you there.  For fans of historical romance looking for a satisfying read look no further than Highland Honor by Christine Young.

*I received this book from the author in exchange for my honest opinion.
at December 15, 2011