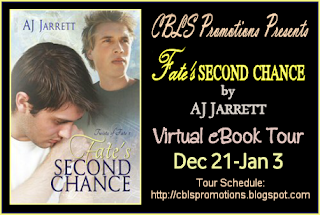 For fans of the m/m genre there's an intriguing new book out by AJ Jarrett with a hint of the otherworldly to make it even more unique.  Courtesy of CBLS Promotions, AJ has provided me with an excerpt of Fate's Second Chance to whet your appetite and letting me give a digital copy of it away too.  So be sure to read the entire post to find out how to enter.  Now, without further ado, here's a taste of Fate's Second Chance....... 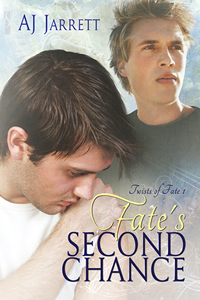 BLURB:
Marie thought dying was the worst thing to happen to her, until informed she's always been a man's soul trapped in a woman's body. As Marc, he's got one shot to set things right--by finding love with his best friend and soul mate--with only a month to do it.
Marie Carter has never felt comfortable in her own body, and it took dying to find out why. Ross, her unlikely guardian angel, informs her that mistakes were made and he needs her help to save her fate, Ross's wings, and her best friend's heart.
Six month's after Marie's death, Marc arrives with one month to heal Sabrina's—his sister's—suffering, and win his soulmate, Shawn. If he fails, Sabrina will never know peace, Ross will be kicked out of heaven, and the love of his life will die from a broken heart. Will that be enough time to heal the wounds a lifetime in the wrong body has caused? 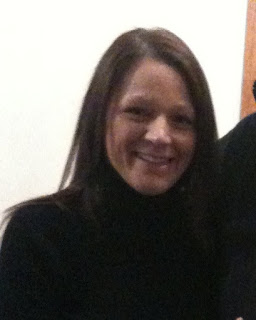 AJ Jarrett currently lives in the Midwest with her husband and four children. A lover of M/M romances she has started writing her own stories for others to enjoy. She is currently published through Silver Publishing and her first release Fate’s Second Chance is the first in the Twist of Fates series. When she is not chasing around her kids she can be found sitting on the couch with her trusted laptop giving life to the voices in her head.

**********GIVEAWAY**********
Prize is a PDF copy of Fate's Second Chance
-OPEN TO ALL.
-Just leave a comment, along with your email addy, to be entered.
-Winner will be chosen using random.org and will have 48 hours to respond to my confirmation email or another winner will be chosen.
-Giveaway ends at 11:59 PM CST on 1/1.