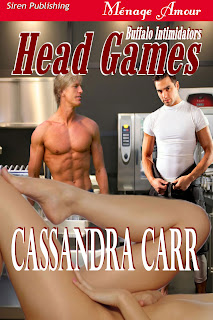 Leo Laporte and Scott Schaeffer are teammates on the ice and roommates off it who also share women. They’ve been coming into Kelly Chase’s bistro after games for months, and they know they want her. As the attraction grows, the men realize they want more than a one-night stand - they want forever.

Kelly’s not so sure. Yes, she wants both men. But a permanent ménage relationship? That’s taking giving her heart away to a whole new level, and a chance she’s hesitant to take. Then Leo is injured and Scott’s on the trading block, and she realizes this may be her only shot at true, everlasting love.

There are so many questions swirling around inside Kelly’s head. Can she believe in Leo and Scott’s love? And will her business and her reputation survive once people find out she’s with two men?


********************
As a big fan of romance books featuring athletes I couldn't wait to get my hands on this book, the first in a series entitled Buffalo Intimidators, to get a taste of a hot hockey player.  What I found was not one, but two sexy hockey players who share more than just playing time.  And for bistro owner Kelly, she's the lucky recipient of their undivided attention.
Leo and Scott are extremely sexy and each offer something different to this relationship.  Leo is more spontaneous and animalistic, while Scott is more methodical and charming.  They've shared many women before since first becoming roommates and the relationships were always about fun but nothing more serious.  Being with Kelly though is all about emotions and both men have to use their talents to win her over.  They see nothing wrong with sharing her but soon find out that the path is rocky for them to all achieve happiness.
Kelly has many reasons to be scared of a relationship with Leo and Scott, especially with the idea of a menage very new to her.  Kelly already has body issues where she thinks she's too large to be attractive and doesn't believe one man will be attracted to her let alone two.  Her self-esteem issues flare up from time to time causing hesitancy on her part.  She also has big concerns about her business if people discover how she lives her personal life.
Leo and Scott constantly reassure Kelly of her attractiveness through the intense sexual interludes that take place often throughout the story.  The scenes are hot with lots of edgy talk and each character gets equal time.  This is a menage where everyone is equal.  It's too bad the real world intrudes when a sleazy sports writer makes their menage known and peoples prejudices come out.  This part of the story came out of nowhere and felt a bit over the top.  It was merely a device used to pull our lovers apart.
As with most menages I've read, the feasibility of this kind of relationship isn't really dealt with, it's touched on but not really addressed.  It's made to sound simple, but in the real world it's probably not the case.  This didn't ruin my enjoyment of the story at all, but definitely kept me from becoming fully sucked into the story.
From the steamy sexual interludes to sexy hockey players I enjoyed this story from first page to last.  The ruggedness of the game intrigued me and I long to see more from the world of the Buffalo Intimidators.  Hopefully Ms. Carr plans to keep the game going for a long time to come since I don't want my first taste of these players to be my last.
My rating for this is a B-
*I received this book from the author in exchange for my honest opinion.
at December 29, 2011